PHOENIX – With only one week until the 25th Anniversary of the Royal Rumble, calling WWE Raw SuperShow "eventful" would be a gross understatement. Chris Jericho informed the WWE Universe that "it's going to be the end of the world as you know it," while Dolph Ziggler managed to upstage WWE Champion CM Punk on two separate occasions. Also, Zack Ryder was horrifically chokeslammed through the entrance stage by Kane in a Falls Count Anywhere Match.

WWE Champion CM Punk vs. John Laurinaitis did not take place (PHOTOS | WATCH)
Moments before Interim Raw General Manager John Laurinaitis battled WWE Champion CM Punk, he received word from WWE's Board of Directors that his job performance would be evaluated. The Board of Directors is bringing Mr. Laurinaitis' decision-making into question, especially his declaration that he would screw CM Punk at Royal Rumble. Furthermore, the Executive Vice President of Talent Relations' job performance would be evaluated personally by WWE's COO, Triple H. 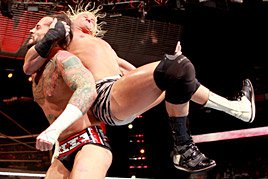 David Otunga and Mr. Laurinaitis read the letter to CM Punk inside the squared circle. Mr. Laurinaitis apologized to Punk, announcing he would fairly call the WWE Title Match at Royal Rumble and that Mick Foley was officially an entrant in the Royal Rumble Match. However, the Interim Raw General Manager also informed the WWE Champion that their match would not take place and Punk would battle David Otunga. This prompted Otunga to attack The Voice of the Voiceless.

Otunga's attack was short-lived and CM Punk was soon left alone in the ring with Mr. Laurinaitis. The Executive Vice President of Talent Relations extended his hand in peace, but was reciprocated with a resounding GTS from the WWE Champion. This bold move by The Second City Savior was quickly upstaged when Dolph Ziggler snuck into the ring and took down his Royal Rumble opponent with the Zig Zag. 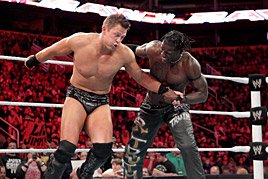 R-Truth def. The Miz (PHOTOS | WATCH)
Earlier in the evening, the former tag team partners engaged in a heated argument during a backstage interview. As a result, Interim Raw General Manager John Laurinaitis informed the two Superstars that the loser of the match would be the first entrant in the Royal Rumble Match. When the opening bell rang, the two bitter rivals each did their best to gain an early advantage in the contest. Momentum swings were fairly even at first, but it was R-Truth who ultimately bested The Awesome One. As a result, The Miz will certainly have the odds stacked against him in the Royal Rumble Match.

Brodus Clay def. Heath Slater (PHOTOS | WATCH)
The Funkasaurus continued to show that he had all the right moves and picked up a victory against Heath Slater on WWE Raw SuperShow. The Superstar hailing from Planet Funk made quick work of The One Man Southern Rock Band and immediately got back to getting his groove on. William Regal watched from the announce table, criticizing Clay’s every move. On SmackDown, Regal was unceremoniously decimated by The Funkasaurus after busting some moves of his own.

Sheamus def. Jindar Mahal  (PHOTOS | WATCH)
Jinder Mahal failed to capture a victory over The Celtic Warrior on WWE Raw SuperShow. With Wade Barrett joining the commentary team, he watched as Sheamus built a great deal of momentum and pummeled Mahal. While the Punjabi Superstar did mount a brief offense, he was stopped in his tracks by a powerful Brogue Kick. Following the contest, The Great White made sure to reaffirm his commitment to win the Royal Rumble Match. 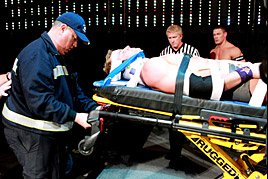 Zack Ryder vs. Kane ended in a No Contest (PHOTOS | WATCH)
The former United States Champion proved for a second week in a row that he is a true fighter. After losing the U.S. Title in part to injuries suffered at the hands of Kane one week prior, Long Island Iced-Z stood up against The Big Red Monster in a Falls Count Anywhere Match. Still injured, Ryder tried to go after Kane early-on, but Kane quickly overpowered his opponent and targeted his injured ribs.

As Eve begged Kane to show mercy, it seemed to only enrage The Big Red Monster further. However, even as he took tortuous punishment, Ryder continued to kick out of Kane’s pinfall attempts. As they battled through the crowd, the two ring warriors made their way to the entrance area. After relentless punishment that left the WWE Universe cringing with every strike, Kane chokeslammed Ryder through the stage. (WATCH: EVE BLAMES JOHN CENA FOR ZACK RYDER'S FATE | ZACK RYDER INJURY UPDATE | RYDER'S PAIN, CENA'S FAULT?) 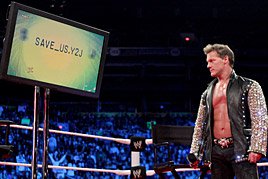 Chris Jericho’s “Highlight Reel” returned to Raw (PHOTOS | WATCH)
After weeks of bizarre behavior since returning to WWE, Chris Jericho seemed poised to address all the questions of the WWE Universe with the return of Jericho’s “Highlight Reel.” With the Jeri-Tron 5000 back to full power, Jericho played a video highlighting his storied career. He then grabbed a microphone and said, “This Sunday at the Royal Rumble, it’s going to be the end of the world as you know it.” The first-ever Undisputed Champion then exited the arena.

Dolph Ziggler & U.S. Champion Jack Swagger def.  WWE Champion CM Punk & John Cena (PHOTOS | WATCH)
In an impromptu tag team match, John Cena and CM Punk immediately showed great teamwork in an effort to take out their frustrations with Mr. Laurinaitis. With momentum not in their favor, Ziggler and Swagger tried to regroup and re-strategize. With a combination of pure athleticism and show-boating, The All-American American and No. 1 contender to the WWE Title built a fair amount of momentum against Cena. But the fighting spirit deep within the Cenation leader overpowered Swagger with an Attitude Adjustment paving the way for the WWE Champion to get inside the squared circle. However, as The Voice of the Voiceless ascended the ropes to elbow drop Ziggler, Mr. Laurinaitis distracted Punk, allowing The Show-Off to capture the victory.

In response, CM Punk challenged the Executive Vice President of Talent Relations to a match tonight and Mr. Laurinaitis accepted!

WWE Champion CM Punk called out Interim Raw General Manager John Laurinaitis (PHOTOS)
One week after unloading a verbal tirade on Mr. Laurinaitis, The Voice of the Voiceless opened WWE Raw SuperShow by calling out the Executive Vice President of Talent Relations, and demanding he admit that he will screw Punk at Royal Rumble. To the surprise of the WWE Universe, John Cena made his way to the ring as Mr. Laurinaitis did not. Cena took the opportunity to demand a match with Kane on Raw and to grant Zack Ryder a U.S. Title rematch.

The Interim Raw General Manager finally appeared and announced that Zack Ryder would face Kane in a Falls Count Anywhere Match tonight. He also declared that if Cena interfered, Long Island Iced-Z would never have another U.S. Title opportunity. Mr. Laurinaitis then announced that CM Punk and John Cena would battle Jack Swagger and Dolph Ziggler next!