The entire WWE roster readied for the Royal Rumble's over-the-top rope scenario this Sunday by going just that - like Sly Stallone in an arm wrestling tournament - on Raw SuperShow. The 25th anniversary of the Rumble is just around the bend, and the WWE Universe is clamoring to see what a retributive, grim-faced John Cena has planned for Kane and if The Miz can prove that he's truly "No. 1" in the 30-man joust.

Johnny be mad!
Moments after watching his friend, Zack Ryder, carted off in an ambulance, the regret on John Cena's face slowly dissipated in lieu of the meanest mug ever seen on the Cenation leader. Kane chokeslammed Ryder through Raw's steel stage, seriously injuring Long Island Iced-Z and simultaneously breaking something inside of Cena. It took the vilest act committed by The Big Red Monster since his return to trigger a darker side of the 12-time World Champion to (literally) show its face.

Though he may not look the part (unlike his grotesquely masked enemy), Cena has been involved in WWE's most vicious matches - from Hell in a Cell to the Elimination Chamber. He's been through hell and it looks like he's ready to go there one more time when he faces Kane at the Rumble.

@DeaconKirby: I gotta ask @TheRock, are you scared of Angry John Cena ? #raw

@dickiegreenlee: "Yes, Cena, yes... Now release your hatred and your journey towards the dark side will be complete!" #Raw

@DAsharpshooters: When John Cena gets super angry, he turns into Vigo from Ghostbusters 2. #wwe #Raw

@justinruff: I woke my wife up to see Angry Cena face. #Raw

@WrestlePassion: Broken back? Big damn deal. Cena came back from a ruptured spine in my day. #Raw

@The_Dalyxman: Damn. John Cena making the rules around here. I like it. @WWE #RAW

@justinruff: Anybody else love that Cena "angry face"? It looks like he channeled Vince. #Raw

@GingerPimpernel: Moral of this #Raw: Cena kept his cool when Kane killed Ryder, but Josh Matthews made him so angry he couldn't hold it in anymore. @WWE #WWE 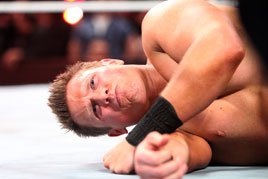 The Miz is No. 1
Speaking of infernal damnation, it seems The Miz has a slim chance in hell to once again headline WrestleMania. The former WWE Champion can make it to the marquee main event in Miami but first he'll need to surpass 29 other combatants in the Royal Rumble Match - from start to finish. His loss to R-Truth "earned" Miz the No. 1 spot in Sunday's all-important battle, putting The Awesome One at a large disadvantage in St. Louis. Of course, No. 2 isn't much luckier, but there's a very distinct psychological pressure that the first entrant must endure, even if such a struggle has been overcome in the past. (Historical Rumble Match photos)

The Miz should spend the next few days studying the 1995 Rumble Match - not because of Pamela Anderson's cameo appearance but rather to takes notes on Shawn Michaels' end-to-end winning performance. You can start here, Miz: Watch HBK win the Rumble. Prepare to dangle for dear No. 1 contendership! 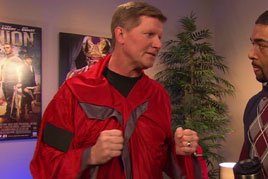 Road Warrior "Ace"
It wasn't red, spike-laden shoulder pads that WWE EVP and Interim Raw GM John Laurinaitis wore into battle against WWE Champion CM Punk. No, unlike Laurinaitis' brother, Road Warrior Animal, the executive came adorned in a silky, choir-inspired robe but in an appropriate shade of scarlet red, perhaps in homage to the legendary Legion of Doom. The clash never took place between "Ace" and Punk, who let the cat out of the bag about Laurinaitis' fraternal ties one week earlier (Read WWE.com's interview with Animal). Nonetheless, what a rrushhh it was to see the WWE Champion lay out his own boss with a GTS! Will this impact the Interim GM's performance view by a returning Triple H on the next Raw.

@BigMastadon: I think we all know that fax was from Hugh Hefner asking for his robe back. #wwe #raw

@ericktumang: What's up with @WWERawGM's wizard robe? Is he going to help the Hobbits bring the ring to Mordor? #RAW

@WWE_Fever: Now Johnny Ace wants to be a good guy huh?? I think he is intimidated by what's gonna happen when HHH gives his review next week on #Raw.

@randomedian: That idiot Laurinaitis didn't even change his expression when he got lifted up for the GTS. #RAW

@Smalls0629: The real reason the CM Punk vs. John Laurinaitis match won't happen tonight is because it's 11:08. #Raw

@Bobbito1230: Note to John Laurinaitis: Never trust a man in a sweater vest to be your replacement. #WWE #RAW

@JacquelineLanay: If John Laurinaitis Was Terminated, Imagine The Celebrations Around The World. #WWE #Raw

@PeteMMA: Chris Jericho said this Sunday is the end of the world as we know it. Should probably cancel my dinner reservations #raw

@nacgator: And I feel fine RT @IAmJericho This Sunday at the Royal Rumble, it's going to be the end of the world as you know it.... #raw

@brendon_bryant: Haha! Smart move there for Ziggler to check his heart rate during the tag match. Heart disease is the #1 killer in America. #Raw #WVR

@MistressGumby: Just how many walrus' have you watched giving birth William Regal? #raw

@tonylayneshow: Regal rapping Grandmaster Flash...highlight of the evening. #raw. This is entertaining

@ThatRoseTattoo: I might have heard wrong but I think I just heard a Grandmaster Flash reference on #RAW

@notwilson: Jericho finally breaks his silence. The crowd goes nuts upon hearing that one sentence. It's like a toddler learning how to speak. #raw

@LucyEllery: No! Not a t-shirt gun! That's what killed Maude Flanders! #jericho #raw