Bell to Belding, Monday's Raw SuperShow was filled with returns and cameos in Anaheim,Calif. A climactic ending sequence involving livid WWE EVP John Laurinaitis and Mick Foley foiled the visual of Mr. Socko's cotton comeuppance in the main event ... but it's all right because Raw was saved by the bell.

The taste of sweet sock-cess
The WWE Universe had a nice day on Monday thanks, in part, to the tube socked success of Mick Foley alongside WWE Champion CM Punk against Dolph Ziggler, Mark Henry and David Otunga. The reemergence of Mr. Socko from the sweatpants of Foley drew WWE fans to their feet even after being soured by an anticlimactic return to action by Chris Jericho, who deserted his team.

Of course, the terse, tense verbal exchange between Punk and Interim Raw GM (shades of Austin-McMahon) led to the executive's blown gasket and ensuing microphone blast to Mick's noggin. (WATCH) Foley may have left Raw with a bad taste in his mouth following the cheap shot by Laurinaitis, but you can bet it'll be Otunga who will be filling his coffee mug with mouthwash instead of his usual joe for the next week.

@mikec3563: @realMickFoley Nice to see you get some in ring time live on a #Raw main event, i get chills when you pull out Mr Socko. Pure nostaligia :-)

@JTWyatt: @realMickFoley We need more of u on #Raw. Just wish u would have stuck Mr. Socko down Laurinaitis's throat.

@meechell83: @realMickFoley Mr. Socko should have his own twitter! Please never leave #raw

@TheAhmedBH: The best part in the #raw supershow was when The Executive VP of Talent Relations and Interim Raw GM John Laurinaitis get angry hahaha :D

@cynicjrh: Punk nailed his promo, but guess what: so did Ace. That was Laurinaitis' best performance to date. If Punk/Ace happens, I'm there. #wwe #raw

@notwilson: Punk/Lauranitis storyline is like Austin/ McMahon. Being in position of power and great #heel, surely many want to see Johnny gets GTS. #raw

@Whovian_24: The fact of the matter is there will NEVER be another 'Austin vs McMahon' like feud. @WWE #RAW 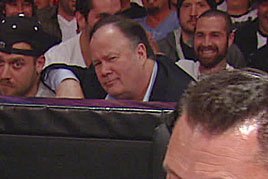 Mr. Belding drops in
“Hey, hey, hey—what is going on here!?” Bayside High's favorite principal was spotted behind the blabbering Michael Cole at the announce desk in Anaheim. Dennis "Mr. Belding" Haskins himself from the teen TV sitcom sensation "Saved By the Bell" got an up-close look at WWE's Zack and Kelly (among others). He even got passed up by Jericho in the middle of one of Y2J’s ringside parades.

An acquaintance of Long Island Iced-Z and an active participant in the Ryder Revolution, Haskins is clearly more beloved than Perez Hilton (who spoke with WWE.com in an exclusive interview), if you heard the crowd or read a fraction of the tweets from Monday evening. But the cameo by Belding (camera-mugging in the crowd like Kevin Nash when the Outsider first arrived in WCW) raised a number of questions about his presence. Just because we didn't see Miss Bliss or Mr. Testaverde doesn't mean a Bayside invasion is out of the question.

@mrbelding: To all WWE fans! I hope you had as good a time as I did tonight! Hats off to all of the great pros! Nothing but love! #RAW #grateful

@ThatGuyZo: Zak Morris: "Time out!" We got a Mr. Belding sighting on @WWE #Raw! #savedbythebell

@SayJessay: Mr. Belding is ringside at #Raw. Haven't seen him enjoy a wrestling match this much since the Bayside/Valley prank war.

@Jabotism: I wonder if Mr.Belding gave @IAmJericho detention for walking out on the match tonight? #RAW

@Ivory_May: Haven't seen Perez Hilton in a while, wow, he got slim ö.ö #WWE #RAW

@R0BJohnson: Haha. Mr. Belding (who is in the front row at #Raw wanted a high-five from Y2J but got left hangin lol

@Dejay11chris: Just saw Mr. Belding on #Raw. I really don't want him to become GM though, when Laurinaitis is doing such a great job.

@mandita_bandita: Lol! That is true! “@ROrtonsVoice: Is it just me or does Perez Hilton look like a normal size Hornswoggle? #WWE #RAW” 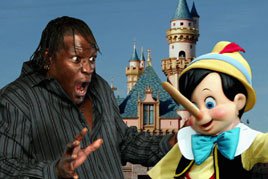 Little Jimmy goes to Disney
Typically, people go to Disney after a big win. R-Truth seemingly went weeks before the 30-Man Royal Rumble Match, presumably planning a trip to WrestleMania instead of the Magic Kingdom. After meeting Mickey Mouse and others, the unbalanced renegade tried to convince Wade Barrett that the "Barrage" wasn't winning the over-the-top rope clash on Jan. 29, and Truth used his vacation pic with Pinocchio to support his claim. (WATCH) In accord with a lie about Wade's Rumble odds, the wooden puppet's nose grew as quickly as Barrett's anger.

Was that even PG? Fortunately, enough of WWE fans' tweets were.

@GaSportsCraze: Pinocchio tweet. RT @WWERawGM: My heart goes out to @ZackRyder. Really unhappy with what went down on #RAW

@MrNashor: LOL. @RonKillings is hilarious. He had a talk with Donald Duck and Pinocchio, and elephants can fly. #RAW

@caimart521: I wish R-Truth was a character you could meet at Disney. #RAW

@SilverMoon21: Oh man poor Wade....but then again this was just a warm up not a pre-view of Royal Rumble. The #BarrettBarrage will prevail! #RAW #WWE

@TheLos: R-Truth with Pinocchio is the creepiest thing I've ever seen! #RAW #WWE

@p_leo96: Hahaha, R-Truth at Disneyland! So cute. Pinocchio and R-Truth are so alike! @WWE #Raw #Supershow

@StoreyXIV: Is this Cena embracing the hate? #Raw

@Matttyce00: I know there's probably a ton of tweets saying this BUT i want Chris Jericho's jacket! #Raw go clubbing with that..DAMN

@DaRealMikeHertz: @WWE 1992 Royal Rumble is definitely the best rumble of all time #raw

@missweaz11: Love this new angry state that @JohnCena showed tn on #Raw kane is going to get what he deserves at royal rumble