CORPUS CHRISTI, Texas - Kane continued to taunt John Cena on the second WWE Raw SuperShow of 2012 and brutally attacked Cena and United States Champion Zack Ryder. Also, Chris Jericho was once again speechless in front of the WWE Universe and Edge and the legendary Four Horsemen were announced as 2012 WWE Hall of Fame inductees. 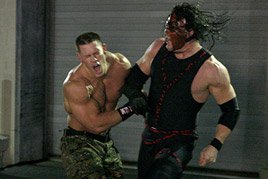 John Cena vs. Dolph Ziggler ended in a No Contest  (PHOTOS | WATCH)
Two weeks before facing WWE Champion CM Punk, No. 1 contender Dolph Ziggler battled 10-time WWE Champion John Cena in WWE Raw SuperShow's main event. Ziggler used his agility and amateur background to show-off and keep Cena from building momentum early in the contest. However, as Cena built up steam against Ziggler, the TitanTron showed Kane attacking Zack Ryder as the U.S. Champion tried to change his flat tire. As soon as he was free of Ziggler's attempts at a sleeper hold, Cena ran to help his broski. As he exited the arena, the Cenation leader was attacked by The Big Red Monster. The menacing Kane stood over the unconscious Cena and Ryder as Raw SuperShow went off the air.

Divas Champion Beth Phoenix vs. Eve did not happen (PHOTOS | WATCH)
Eve made her way to the ring ready to battle WWE Divas Champion Beth Phoenix, but instead of The Glamazon’s entrance theme playing, the arena went red and Kane’s music played. Eve panicked, unsure of what to do until U.S. Champion Zack Ryder ran to the ring to try and help her escape. They ran to Ryder’s car, which suspiciously had a flat tire. 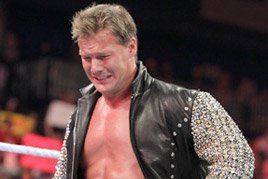 Ricardo Rodriguez called out R-Truth allowing Miz to attack (PHOTOS | WATCH)
After two weeks of being attacked by his former tag team partner, The Miz failed to recruit a bodyguard to provide protection from R-Truth. Taking matters into his own hands, Miz forced Ricardo Rodriguez to insult R-Truth in order to call him out in Corpus Christi. Alberto Del Rio's personal ring announcer tried to avoid a confrontation by signing "La Cucaracha." However, slapping the microphone out of R-Truth's hand resulted in the physical confrontation Ricardo hoped to avoid. But before R-Truth could leave the ring, The Miz attacked from the crowd. Even though The Awesome One's intial attack seemed successful, R-Truth turned the tide, forcing Miz to flee back through the crowd. 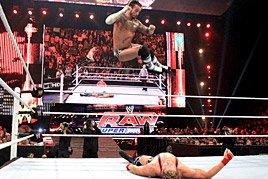 WWE Champion CM Punk def. Jack Swagger (PHOTOS | WATCH)
In two weeks, CM Punk will defend the WWE Championship against Dolph Ziggler with Interim Raw General Manager John Laurinaitis as the Special Guest Referee. On WWE Raw SuperShow, “The Voice of the Voiceless” faced off against another of Vickie Guerrero’s prize Superstars, Jack Swagger. However, in an effort to show his impartiality toward the WWE Champion at Royal Rumble, the Executive Vice President of Talent Relations Mr. Laurinaitis told Punk that if he defeated Swagger, The All-American American and Vickie Guerrero would be banned from ringside at Royal Rumble.

With this extra bit of motivation, the WWE Champion battled the former World Heavyweight Champion with increased vigor. However, Jack Swagger is a formidable competitor and used his amateur background to try and maintain an advantage over “The Voice of the Voiceless.” However, following a flying elbow drop, the referee made an errant three-count that allowed CM Punk to secure the victory. Regardless of the call, Jack Swagger and Vickie Guerrero are banned from ringside of the WWE Title Match at Royal Rumble. 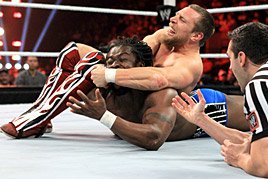 World Heavyweight Champion Daniel Bryan def. Kofi Kingston (Non-Title Match) (PHOTOS | WATCH | WATCH WWE.COM EXCLUSIVE)
Earlier today in a WWE.com Exclusive video, Kofi Kingston questioned the way in which World Champion Daniel Bryan defeated Big Show on SmackDown. In response, Bryan challenged Kofi to a match on Raw SuperShow. When they collided in the ring, the agile competitors battled back and forth, but it was the World Champion who stood victorious after capturing Kingston in the LeBell Lock. As Bryan celebrated like he won the lottery, Big Show wanted to have a word with the champion.

Daniel Bryan offered Big Show another opportunity for the World Title at any time. The World’s Largest Athlete was one step ahead of the champion and revealed that SmackDown General Manager Teddy Long granted Big Show a No Disqualification, No Count-out World Title rematch on SmackDown. 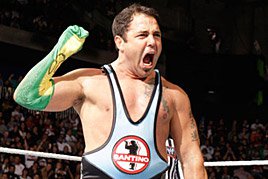 Sheamus & Santino Marella def. Wade Barrett & Jinder Mahal (PHOTOS | WATCH)
Last week on Raw SuperShow, Santino Marella was decimated by The Barrett Barrage. On SmackDown, Barrett and Jinder Mahal teamed up to attack The Celtic Warrior. Sheamus and Santino joined forces in seeking retribution and proved that a common goal can breed excellent teamwork. After a hard-fought battle, Santino took down Mahal with the Cobra and secured the victory.

John Cena attacked Kane (PHOTOS | WATCH)
The Big Red Monster started the second WWE Raw SuperShow of 2012 by taunting John Cena, continuing to push him to embrace hate. It didn’t take long for the Cenation leader to respond as he charged the ring and a brawl erupted all over the arena and backstage. The battle ended in a stalemate with neither Superstar truly getting the best of the other.