The evil of Friday the 13th came four days early on Raw SuperShow a.k.a. Monday the 9th. There was also a sense of Saturday night fever with the jive-stepping forth of a dancing b-boy behemoth.

Funkasaurus wrecks
The WWE Universe's jaws dropped then snugged to a smile when Brodus Clay finally made his debut on Raw SuperShow. After months of John Laurinaitis' ever-shifting preparations for the boogie-down big man's burst onto the scene, it was an unexpected sight to see the so-called "Funkasaurus" so smoothly groove down the aisle to face Curt Hawkins.

Between the bright red jumpsuit and bucket hat, the pair of vixen-like backup dancers, and the jive juggernaut's footwork, Brodus' arrival felt a lot more like a Hype Williams production. And the WWE Universe immediately embraced this side of Brodus, who crushed his opponent in the ring to boot. (WATCH)

The Funkasaurus and his fly girls have shimmied into sports-entertainment. All we can hope for is a double-wide Dougie somewhere down the road.

@SirTweets_ALot: The reason Brodus Clay's debut was so prolonged is because they had to find the funkiest chicks in the world to manage him. #Raw

@hip_hip_jorge: Brodus Clay should be inducted into the @WWE HOF after last nite's re-debut. #Raw @WWEUniverse

@ihatedarren: OH MY GOD. SOMEBODY CALL MY MAMMA! It's Brodus Clay, bahhhhhhhh haha! I want the Funkettes! #RAW

@MrVicious: On a scale of Macho Man to Shockmaster, I'd say the debut of Brodus Clay is around a Disco Inferno #RAW 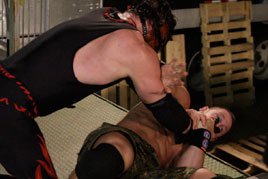 Oh, the horror!
No hockey masks, razor-fingered gloves or chainsaws were necessary for Kane to turn Raw SuperShow into his own personal slasher flick on Monday night. The Big Red Monster haunted John Cena, Zack Ryder and Eve all Raw long, stalking the three in the shadows of the American Bank Center and into the back lot, where the masked demon terrorized the U.S. Champion and his lady friend like they were two teens parked in the woods of Camp Crystal Lake.

It was all child's play for the 7-footer to dismantle Long Island Iced-Z, drawing the Cenation leader to the doorstep of the house of the devil. Fueled by the topic of hate, the high tension between Cena and Kane only continues to escalate. Jeepers creepers, John. Watch out!

@ohnoitsyasmin: Well, there's going to be a lot of fussy kids tonight. Thanks, Kane. #RAW

@fearnie07: @CraigTaylor11 I love kane with his mask.. Everythings getting ATTITUDE again. #raw

@Awesome_Jericho: Wow kane is taking over #RAW and i am loving it

@Louise_Anne86: @WWE #RAW Kane: Randomly appears and disappears. Proof to my assumption that he is a descendant of Jason Voorhees #GetTheMachete

@lizzieb92: #Raw was amazing last night! Except for Kane...he scares me.

@Shar316: Dad thinks Kane should challenge The Undertaker to a match for Wrestlemania 28. YES PLEASE. #Raw

@tastic209: I like the Cena/Kane stuff. Reminds me of old school angles. Kanes amazing on the mic. @WWE #Raw

@Wrestling617: Catching up on #RAW - is Kane telling me to leave my wife? 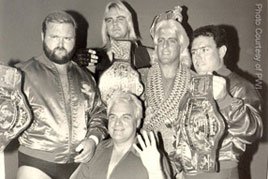 Edge, Horsemen made famous
As heinous the acts of a masked madman were, the brilliance of the 2012 WWE Hall of Fame Inductees was radiant enough to vanquish the darkness engulfing the squared circle. The WWE Universe rejoiced with an unprecedented dual announcement about the Class of 2012, starting with The Rated-R Superstar, Edge. (WATCH)

Within just one year of being forced into retirement by injury, the multiple-time World Champion chases his dream into the prestigious Hall beside the likes of Shawn Michaels, Bret Hart and Ric Flair ... who, himself, is now joined by his legendary associates, The Four Horsemen. (WATCH) Rightfully flanking "Naitch" is a quartet of ring legends: "The Enforcer" Arn Anderson, Tully Blanchard, Barry Windham and JJ Dillon.

Around the globe, WWE fans of both old and new school formed metal horns with one hand and raised four fingers with the other, signifying their support of the proud inductees who enter the Hall of Fame on the eve of WrestleMania XXVIII in Miami. (Get tickets to the 2012 WWE Hall of Fame Ceremony)

@randomedian: I guess @WWE forgot that they announced Mil Mascaras as the first inductee into the 2012 Hall of Fame back in October. #RAW

@Gr8scott: only good thing of @wwe #raw was edge and horsemen in the hall of fame. WOW I AM OLD

@davecarsley: Seems a little early to induct Edge into the Hall of Fame but it's deserved nonetheless. #Raw

@MzMbacke: The 4 horsemen??? So this means Ric Flair gets inducted to the hall of fame TWICE?? .. I'm confused #WWE #RAW

@Wolverine_L0gan: Congrats to the 4 Horsemen, diamonds are forever and so are the Hall of Fame rings #WWE #Raw

@hithereimsophie: Omg, Jinder Mahal should do the whole Turbanator Gimmick, then he should get an Indian diva in and be Aladdin #raw @wwe

@JenStevensLock: Jericho walking into the ring and crying? Is he going to announce his pregnancy and disappear for another year? #Raw

@mylandro_: The fact Jericho can convey an idea on camera without talking is a testament to him and his understanding on how TV works. #wwe #raw #y2j

@Y2JackBringIt: Jericho is the god of trolling. #RAW

@EmperorVirgil: The WWE needs a man with a face tattoo. I think Daniel Bryan is that man. Not sure why. #RAW

@mnnthn: Yes. We plan to have David (Daniel Bryan) hit Goliath (Big Show) with stones during their No-DQ match on Friday. @WWE #RAW

@ladyzallia: @WWE Can't believe I almost missed a Santino-Sheamus tag team! They're so cute together! <3 #Raw

@ThatGirlKarina: I feel like Santino is the "family friendly" version of Eugene. #wwe #raw

@RAMelok: I hope, for Eve's sake, that Zack Ryder did not enable the child locks on his Kia Soul. #Raw