"The end began" on the first Raw SuperShow of 2012 but it also inspired its share of potential resolutions for the new year. Biting your tongue, opening up to others, being more helpful to your friends - all perfectly good approaches for a refreshed you.

Y ... 2 ... SAY something!
The radiant, 32,256-LED bulb-lit ball above Times Square was apparently dismantled to outfit Chris Jericho's light-up jacket when Y2J returned on 1-2-12. Seemingly the source of the haunting videos cutting into WWE programming for weeks, WWE’s first-ever Undisputed Champion made his return after more than a year away from the sports-entertainment spotlight. Some astute WWE fans predicted that the cryptic precursors may have been related to Jericho, given his first and second comings in WWE ... but no one anticipated Y2J's overwhelming eagerness to lead to, well, absolutely no message from Jericho's ordinarily loquacious lips. (WATCH)

Jericho's presumed "trollin'" (a common thread on Twitter Monday night) or New Year's resolution of silence aside, the world still wants to know what end began on Raw. Also, who were those kids and what was with the school? And will we ever ("evvvvver") see them "aGAIN"?

@_Inno: Was... everyone just trolled by Jericho? I think we were #Raw

@Bwinch11: I still don't get how the videos fit Jericho's return.. #wwe #raw I guess we will find out later

@PeeWheezy: I guess Jericho's return was one of those "nothing needs to be said" moments. #RAW

@aldialfatah: Chris Jericho is back to WWE. Speechless. #RAW

@blueprint1735: #Y2J Chris Jericho is back on Monday #RAW i had been waiting for 14 months and he's back

@PeteMMA: Just marked out for Chris Jericho like I did 12 years ago #raw

@alieneight: Very happy that Jericho was the mystery man. Bless his heart for trying so damn hard to deny deny deny. #WWE #Raw

@Mujica2Manuel: #RAW Was Jericho returning to the WWE? or Dancing with The Stars? Nice Jacket Y2J..!!!

@MarcusCyganiak: I knew it, Chris Jericho is back on @WWE Monday Night #RAW!

@TheHistoryofWWE: Jericho obviously was in that stairwell with Orton and Barrett. Dude came for payback after that kick to the head. @WWE #Raw 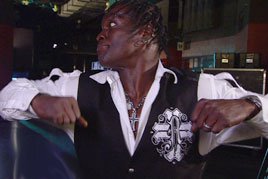 Duck, duck, Truth!
If R-Truth didn't quack you up on Raw, you may not have a pulse. Flapping his arms and quacking like a duck, Truth mocked and stalked The Miz throughout the Memphis locker room. (WATCH) This, of course, prior to another assault and water bottle to the dome of the unhinged Superstar's partner-turned-enemy (admittedly, a good method of recycling).

@mikepiyp: R-Truth is gonna drive in the arena with a water truck and spray the Miz with the hose @WWE #RAW

@zackrydergirl50: Wouldn't it be hilarious if R-Truth and Booker T did that dance Truth just did? They would be all like "Shucky ducky, quack quack." #Raw 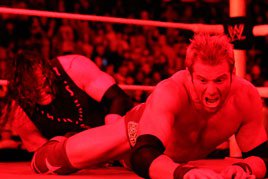 Drag "Z" to hell
For a brief moment, the WWE Universe thought that episode 46 of "Z! True Long Island Story" might've been Zack Ryder's last. You can thank John Cena, broskis. The U.S. Champion survived being dragged through into a sub-ring hell by Kane on Raw. (WATCH) The Big Red Monster ignited a 20-foot flare through the vortex cut into the mat just moments after the Cenation leader pulled Ryder from the grip of Kane in arguably the most important game of tug-of-war Cena has ever played.

Unfortunately, the heroics of Mr. Rise Above Hate didn't save Hornswoggle's pad from the raging plume of fire, as noted by concerned WWE fans who may or may not be starting up a 'Swoggle relief fund.

@JBHuskers: I saw that save of Zack Ryder by Cena in Raiders of the Lost Ark. #RAW

@_ladygoodman: I suppose Zack Ryder would have come out of hell with an awesome tan? I'm so confused...#wwe #raw

@Jthejellybean: Cena, what a save. #RAW

@RobertAitkenBR: Zack Ryder is going to the depths of Hell. No, not Long Island. The real Hell. #RAW

@Sarah88WWE: @ZackRyder Has been pulled to Hell!! #RAW but in the last seconds cena managed to Save his Woo Woo Woo life!!

@5CornersxSmootx: #RAW YES CENA, SAVE ZACK RYDER FROM KANE WHO'S DRAGGING HIM DOWN TO THE LITTLE PEOPLE'S COURT.

@PaintTheCosmos: Oh my, we did forget Hornswoggle lived under the ring. Roasted marshmallow bits. @WWE #RAW

@HacksawJDuggan: I told you tough guys I'd make it on #RAW tonight! HooOooOoo! See you at the Rumble? USA! USA! USA! ;Q

@straight_edge76: Daniel Bryan is the Tim Tebow of the WWE. #RAW

@BloodtypeOnline: It may be the new year, but Wade Barrett still sucks. #Raw #WWE

@ShazzyNortje: #raw isn't the same without @RandyOrton .. Not hearing Michael Cole say the Viper Randy Orton is just so unusual

@Status_Tweets: I wonder if Little Jimmy is the voice Orton hears in his head... #Raw

@BuddyAcker: We get a look back at the Royal Rumble match from 1995, which was actually a very solid one. @WWE #RAW