One night after Christmas and seven months before the 1,000th edition of Raw (on July 23, 2012), Monday evening’s SuperShow was the gift that kept giving. Like a kid tightly toting the prized possessions left by good old Saint Nick, the Superstars, Divas and even top WWE executives showed off some newly snagged holiday presents.

It’s the day after Raw. In the spirit of the season, let’s see what you thought about the gifts that got GOT by the roster …

Laurinaitis gets a new shirt
He may not be “a forward thinker” (according to CM Punk), but John Laurinaitis sure is a hip dresser. The newest addition to the WWE EVP and Interim Raw GM’s wardrobe was one of the WWE Champion’s “Best in the World” tees, making for a mirror image moment between a widely smiling “Jolly” Ace and The Straight Edge Superstar the night after Christmas.

Feigned support or not, later in the evening, the WWE Universe came sooo close to seeing Laurinaitis throw it back to All Japan in a bout against Punk in the tattooed titleholder’s own hometown, the Windy City.

@BlueSwim: All Japan name-dropped on #Raw? Can't remember another time that has happened. @WWEgames #WWE #AJPW

@MrsZiggles: Punk vs John L? Haha that'll be entertaining, i just hope he doesn't take his shirt off #RAW

@Fierr89: Kinda disappointed in #Raw. I was sure we'd get to see Johnny Ace get a GTS. It would have been a Christmas miracle!

@NotFakeRichardH: Getting ready to watch a @CMPunk match in my new @CMPunk T-shirt I got for Christmas. I rock. @WWE #Raw

@Vixentye: #wwe #raw John Laryngitis looks like a stuffed sausage in that CM Punk shirt... can't pull it off bro

@jayjayniknak21: you are a disgrace to that shirt bring the best in the world out @CMPunk @WWE #RAW

@BreakingKayfabe: Imagine if they just wheeled out Maven in a Best in the World shirt next to absolutely no reaction #Raw 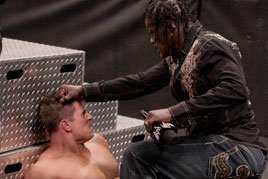 Truth gets retribution
Jimmys beware! R-Truth has been set free!

The rhymin’ renegade made his return to Raw after a beatdown from his once trusted associate, The Miz. After thrashing his newfound enemy, Truth spoke about holiday gifts and offered an altered verse from “Auld Lang Syne” that ended with Miz, his “old acquaintance” who’s going to “get got!”

While dancing of the perimeter of incoherence, Truth’s core message was clear to The Awesome One, who better watch his back in 2012. Do you understand?

@WWEFunnyQuotes: "THAT'S the problem with Christmas! You open all your presents and it's OVER!" -@RonKillings #wwefunnyquotes #Raw

@DeaconKirby: I'm really gonna have to tell R-Truth to stop beating ppl over the head with water bottle.Especially if its #DeerPark .Thats the good 1 #Raw

@Mr_Tazo: There's the bottle of water!! I want every Monday night to be like Christmas!!! @WWE #RAW

@Riazhg: #RAW ...and that’s the truth, the whole truth & nothing but the truth! The Miz is gonna get got! Courtesy of a slow un-raveling from R-Truth 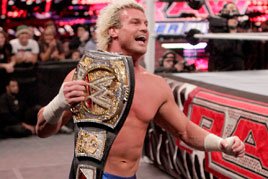 Ziggler gets … a new championship?
Was it a Christmas miracle or just a precursor of what’s ahead in 2012? With his golden mane puffed out perhaps more than his chest, Dolph Ziggler actually pinned CM Punk to earn No. 1 contendership and a title opportunity on the next edition of Raw – the first WWE show of the new year – in a joust that could very well become match of the year in 2012.

After the victory, Ziggler acted like Howard Finkel had just proclaimed him the "NEWWW WWE Champion." The showoff grabbed the WWE Championship for celebratory laps around the ring while The Second City Savior’s fellow Chicagoans voiced their displeasure … which admittedly didn’t quite reach the anti-Cena levels from Money in the Bank this past summer (one of WWE.com’s Top 25 Matches of 2011).

Speaking of Punk’s hometown, is Chi-Town really the greatest WWE city as The Voice of the Voiceless claimed? Or is it really New York City? Boston? Take your pick of WWE Hot Beds and discuss.

@EllisCroft: #RAW is in Chicago again tonight, reminds me of Money In The Bank. Match of the year. @CMPunk @WWE

@JoeyStyles: Next Monday on the first Raw of 2012, @CMPunk defending the WWE Championship against @HeelZiggler could be the WWE Match of the Year. #Raw

@gerardosmm: Next Week on @WWE #Raw The Best in the World WWE Champion @CMPunk vs @HeelZiggler for The WWE Champion on New Year..!!

@amygurl325: I think Chicago has the craziest @WWE fans ever #Raw

@RefereeStevieG: This Chicago crowd is hot as hell! They want to see wrestling! @WWE #Raw

@TechProAlex: Johnny Ace just robbed CM Punk on this gauntlet match! "The Best in the World" will retain the WWE title next week! I know so! @WWE #RAW

@amb_allenby: #Raw is always the best when it's in Chicago. @CMPunk!

@King12String: Well, Chicago crowd... You had your moment at Money in the Bank, but tonight you let the fame get to ya. Shame on you. Go take a nap. #raw

@Sorgatron: I'm more excited for Del Rio's wheelchair than I have been for any of his cars... #wwe #raw

@Deggisfox: Daniel Bryan has proved to us one thing tonight: Mark Henry can be easily distracted by shiny objects. #WWE #RAW

@Joshykun: Well I see the Bella twins. My Christmas wish for them to be future endeavored wasn't fulfilled. Damn you Santa!!! #Raw

@wweshowtime: You have to feel bad for Del Rio, being out because of injury. 6 weeks without a major talent on #RAW

@wwesouthafrica: So it was Kane's idea to make a #CenaSucks t-shirt?? #raw

@Shar316: Dear Kane, you'll never be as good as your legendary brother, The Undertaker. #justsayin #Raw

@RFWraslin: @WWE When Kane speaks, be sure to have a dictionary in hand #notetoself #Raw

@mgbertock: I got the new Mark Henry t-shirt for Christmas. So pumped. #RAW @WWE #Merch