A new surge swept through the WWE Universe on Monday night just 24 hours after new champions were crowned at WWE TLC: Tables, Ladders & Chairs. The revolution spawned on pay-per-view enrooted itself on Raw SuperShow in the City of Brotherly Love, Philadelphia … the native land of a similar yet more extreme movement in sports-entertainment: ECW.

EC-dub!
It wouldn’t be a trip to Philadelphia without undertones of extreme. In the birthplace of ECW, the crowd was more excited than Rikishi (respect, respect) at the intersection between Geno’s Steaks and Pat’s King of Steaks. Chants of “E-C-dub! E-C-dub!” complemented the rousing, rebellious opening address by WWE Champion CM Punk (himself, ironically, an ECW alum from his earliest days as part of the WWE Universe) and continued in text format on Twitter.

WWE fans recalled the hardcore values associated with The Land of the Extreme – prior to vampire bites and Kelly Kelly’s beefy, bearded, jealous boyfriends – and so did the Superstars. The Straight Edge Superstar and newly anointed titleholders World Heavyweight Champion Daniel Bryan and U.S. Champion Zack Ryder made Sandman-esque entrances, parting the Philly crowd for the main event six-man tag. Even Wade Barrett must’ve been channeling some Tommy Dreamer when he thrust Randy Orton’s prone body through a table (WATCH) as recompense for his loss at WWE TLC.

Had Jinder Mahal gone all “genocidal,” pointing toward the rafters and leaping off a series of steel chairs, it would've been an early Christmas for Joey Styles.

@JoeyStyles: Champs @CMPunk @WWEDanielBryan & @ZackRyder would have fit in perfectly in Original ECW. Tonight, #Raw in Philly looks like ECW 2.0 to me :)

@PINFALLMagazine: A tribute to the Sandman in Philly from Bryan? #ECW #Raw

@domerhs: Somebody tell @michaelcole that ECW never died it's always been here and will always be true wrestling fans won't let it die @WWE #RAW

@suboy2k1: Felt good hearing the #ECW chant during #RAW! Takes me back....

@JoeyStyles: Thanks for the ECW chant Philly! #Raw

@thealexsloan: #Raw is the home of #ECW

@JoeyStyles: OMG! South Philly fans cheered the hunter that shot Bambi's mother...and I love them for it! #Raw

@ApexPredator92: ROH AND ECW in one right here, the ECW crowd like entrances, with some true ROH wrestling, love it #RAW

@TheKrausHouse: I know @JoeyStyles just wet himself hearing ECW get a mention on #Raw. #IWantWrestling

@ThatGuyT1E: The face team comes through the crowd in classic #ECW fashion! CM Punk should feel at home, starting in WWE-ECW! #RAW

@BobbyGreene17: I dig the ECW style entrances for the faces on @wwe #raw #ecw 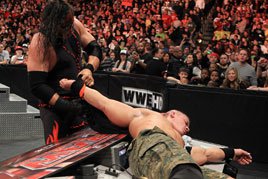 Kane tears into Cena
John Cena’s going to need a bigger boat. And a new shirt. After The Big Red Monster once again stalked and assaulted the Cenation leader, the 7-footer went (reverse) Hogan on his target by savagely tearing off Cena’s T-shirt. The masked creature then descended back into the depths of darkness with the tattered top in tow while a stunned and seemingly unnerved Cena recovered in Kane’s deep red light.

Surprisingly, The Big Red Monster chose to zero in on Cena rather than Mark Henry, the individual who crushed the masked demon’s leg when he was last seen in WWE. Legions of WWE fans want to know why and, by now, so does John Cena, who can no longer deny that he himself is in the crosshairs of the infernal madman.

Meanwhile, across the country in San Francisco’s Candlestick Park, football fans were hoping that when the lights went out in the stadium, a scarlet hue and a steel helmeted monster would soon follow.

@WxManShane: @MattIGN He obviously just wanted the latest John Cena T-shirt... it only comes in women's and kid's sizes at shows. #Raw

@TheSteamer: There has to have been an easier way for Kane to acquire a tacky John Cena t-shirt. #Raw

@danniebear87: I don't care what John Cena has to say. I just hope Kane comes out and chokeslams him again #RAW

@GusRamsey: anyone else expect Kane to enter Candlestick Park when the lights came on? #MNF #RAW

@RJBPHILLY: Why is Kane like 16x stronger with the mask on? #RAW #IveWonderedThisForYears

@Von_Hamish: Lmao at the woman at @WWE #RAW screaming at Kane to stop attacking Cena. Bless her.

@hamlett1020: Kane looks like @CobraCommander with the hockey mask thing on #wwe#raw

One proud poppa
Many would be embarrassed to see their father in a bright orange headband in a crowd of cheering dudes express how proud he is of his boy – on camera. If you thought that about Zack Ryder, you must never have seen his YouTube show.

Uplifting like an encouraging pep talk after a little league loss, the words spoken by Ryder’s father (who looked more like a “bro” in his “Woo Woo Woo” gear) uplifted the WWE Universe like a holiday season melody sung by Nat King Cole.

@cynicjrh: I want to get a dog and name it "Zack Ryder's Dad" #wwe #raw

@WrestlingTheory: Zack Ryder's dad is totally awesome. My heart is warmed by that. #wwe #raw

@ComicalJoMoFan: Zack's dad is a Broski now? I thought he was a JoMoSapien! lol #Raw

@JoelThirion: @wwejoshmathews you do realize you almost ate a punch from the big show just moments ago, right? #RAW

@SummerHunterWWE: The Big Show is about to cry. #RAW

@MarkinOut: Maybe they gave Big Show the title run for 45 seconds to make him like Andre the Giant. #WWE #Raw

@WWEsAngel_Nef: Pretty sure after that match, I could beat the Glamazon at the next PPV and become Divas Champion. #raw #wwe

@MizIsAwesome999: @WWEgames @WWE Who doesn't feel bad for Big Show? It's a shame he lost the title so quickly. #Raw

@aj0314: Santino Marella loses from an Alabama Slam from Cody Rhodes. Yeah, he's going to win the Royal Rumble for sure. #WWE #RAW

@ PINFALLMagazine: Next feud for Kane is against the Divas, they are all jealous of his extensions. #Raw

@theisb: I gotta say, Dragon/Ryder/Punk is looking pretty good for this year's King of Trios. #Raw