Who was snubbed at the 2011 Slammy Awards?

Not everyone goes home happy after the Slammy Awards. Or if you're Beth Phoenix, you go home in shock with a red slap mark across your face, courtesy of Kelly Kelly.

The Glamazon didn't even give Kelly a chance to relish her award for Divalicious Moment of the Year before trying unsuccessfully to swipe the Slammy out of her hands on Monday night. She felt she deserved it, envelope be damned.

Well, guess what? She did deserve it.

Phoenix isn't the only one who has legitimate beef over leaving empty-handed, though. By our count, there were five Slammy Awards that could have feasibly gone another way in the voting. That includes Superstar of the Year, which the WWE Universe bestowed upon CM Punk.

With that said, it's time to take a case-by-case look at the snubs of the 2011 Slammys. In other words, who has reason to complain about being passed up for awards? And whether you agree or disagree with our selections, be sure to lend your voice to the snub debate on our Facebook page.

There was no way Alberto Del Rio would capture an award that depended on the WWE Universe's approval, but he definitely earned it based on performance. It was a banner year for The Mexican Aristocrat; he won the WWE Championship twice, Raw's grueling Money in the Bank Ladder Match and the biggest Royal Rumble in history, all accomplished just over a year into his WWE career. It's clear Del Rio took the loss to heart, as he unleashed his frustration on Raw by twisting WWE Champion CM Punk's arm like a pretzel just days away from the WWE TLC pay-per-view. Punk may have won the popularity contest, but Alberto has a much bigger prize on his mind again: the WWE Title. 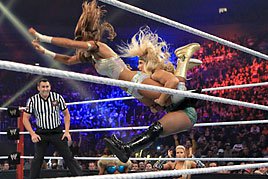 As much as it was a terrific 2011 for Kelly Kelly, let's face facts: the Divas Championship changes hands multiple times every year. Winning the title with a victory roll over Brie Bella arguably doesn't give it award-worthy oomph. But what The Glamazon is managing to do in the ring redefines the WWE Universe's expectations for a Divas match. The Survivor Series crowd was floored by Beth's top rope Glam Slam, a maneuver that looks devastating enough on its own. While we're at it, Natalya's double Sharpshooter also had more "wow" factor as a Divalicious moment. Long live the "pin-up strong" movement.

Any time a WWE Legend retires, it's a game changer. When it happens unexpectedly and forces the World Heavyweight Championship to be vacated, it flips the entire WWE upside down. Edge shocked the WWE Universe by announcing his retirement on the April 11 edition of Raw and shook up the title picture in the process. So, while the WrestleMania XXVIII main event between The Rock and John Cena is undoubtedly huge, it doesn't trump the impact of WWE losing one of its greatest entertainers of all time. And, who knows, if The Rated-R Superstar was still around, we might have never seen Mark Henry get his chance to reign as the World Heavyweight Champion.

Even though Punk took home two Slammys for the night, he missed out on this one despite being a slam-dunk choice for the award. When The Straight Edge Superstar walked out of Allstate Arena after winning the WWE Championship at Money in the Bank, the WWE Universe buzzed with a rare kind of energy, simultaneously excited and dumbfounded by the moment. It was the kind of moment that made even non-followers of WWE stand up and take notice. 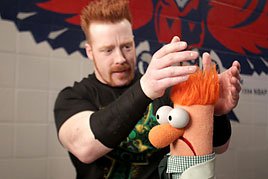 A-Lister of the Year | Snub: The Muppets

If you didn't chuckle at least once when Muppets hosted the Halloween WWE Raw SuperShow, you may want to find out if you're related to John Laurinaitis. Kermit, Miss Piggy and their ragtag crew brought humor and character to every appearance on the show, with memorable moments such as Beaker's conversation with his cousin Sheamus. No offense to Snooki's surprising backflip ability at WrestleMania XXVII, but 2011 is the comeback year of The Muppets.

Now that you've heard our objections, it's time to hear yours. Who do you think was the biggest snub of the 2011 Slammy Awards? Sound off on our Facebook page.