The WWE Universe was brought to its feet when Kane returned with a new mask and the same cold, ruthless attitude of his debut, chokeslamming John Cena as the show went off the air. The Big Red Monster's motives, and targets, remain unclear, but to coincide with his return, WWE.com presents a look at the sort of developments the WWE Universe (and locker room) might expect to see from the last time he wore the trademark mask.

Big “Bad” Machine
For years, it looked like there was nobody who could stop The Undertaker's reign of dominance over the WWE roster, until Paul Bearer warned The Phenom that his brother - long believed dead thanks to a fire Undertaker had started as a child - was not only alive, but hell-bent on vengeance against The Deadman. At Badd Blood 1997, Bearer's warnings came true when Kane, a hulking brute in a red mask, interfered in the first-ever Hell in a Cell Match between Undertaker and Shawn Michaels. Kane's distraction cost his sibling the victory over HBK, but the night kicked off a rivalry between The Deadman and The Big Red Machine that would span the length of both men’s careers.

The Big Red Machine finally took to the ring the next month at Survivor Series, facing off against Mankind. Despite a valiant effort by his twisted challenger (and Mankind's notable threshold for pain), Kane made quick work of his foe, tossing Mankind through the Spanish announce table and slamming him onto the unforgiving concrete before administering his brother's Tombstone Piledriver for the victory.

Brother Against Brother
The Deadman initially refused to step into the ring against his own flesh and blood, but after Kane betrayed his brother by locking him in a casket and setting it ablaze, The Undertaker relented. The brothers faced off in WrestleMania XIV in a match where The Phenom ultimately prevailed, although it took three Tombstone Piledrivers to finally keep The Big Red Monster down long enough for a three-count. And even that wasn't enough in the long run; Kane recovered quickly from the pin and returned the favor, giving Taker a Tombstone of his own onto a steel chair.

"
At King of the Ring 1998, Kane secured a title opportunity against then-WWE Champion "Stone Cold" Steve Austin in a First Blood Match, where the title would go to whoever could draw blood from his opponent the quickest. On the Raw before King of the Ring, Kane gave The Rattlesnake a gruesome warning of things to come, dousing him in a shower of fake blood and warning the shaken champion that, on the pay-per-view, "the blood on you will be for real."

The Champion From Hell
Following the “bloodbath” on Raw, Austin and Kane met at King of the Ring for The Rattlesnake's WWE Championship. Their contest took them all over the arena and finally ended with the two Superstars encased in the Hell in a Cell structure, which mysteriously lowered itself onto the ring towards the end of the match. Despite “Stone Cold's” best efforts, Kane withstood the champion's attacks, including a “Stone Cold” Stunner and a steel chair to the head. Interference by The Undertaker ultimately ensured the title would pass to Kane. The monster’s reign was short-lived, though – Austin reclaimed the championship the next night on Raw, and Kane would not hold a world title again until he captured the World Heavyweight Championship 12 years later.

The Monster is Loose 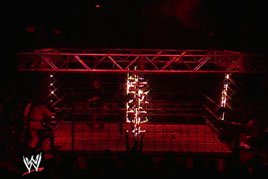 On a 1998 episode of Raw, Kane lost the guidance of Paul Bearer and, as such, had no one and nowhere to turn to. Angry and alone, the monster took out his frustrations on the entire WWE locker room, interfering in several matches throughout the night and laying waste to any Superstar who stood in his way. At the end of the evening, his's rampage came to a close when he ambushed Austin and The Undertaker, who were battling inside a steel cage. The Big Red Machine set the structure ablaze, broke his way in, and joined his brother and longtime opponent in a furious brawl as Raw faded to black.

11 Men Down
Throughout his WWE career, Kane's dominance has been his calling card, and yet he has made himself a particular name in the Royal Rumble Match. The Big Red Monster holds several records, including the most consecutive appearances in the match (13), as well as the quickest elimination of a Superstar (Santino Marella in less than two seconds). In 2011, he also became the first Superstar to join the Rumble at No. 40. His most famous Rumble appearance, however, remains the 2001 contest, where he ousted 11 Superstars - The Rock, Steve Blackman, Al Snow, Perry Saturn, Raven, The Honky Tonk Man, Grand Master Sexay, Scotty 2 Hotty, Tazz, Albert, Crash Holly – and celebrity entrant Drew Carey, setting a record for most eliminations in a single Royal Rumble. Kane ultimately came in second place behind “Stone Cold” Steve Austin, but he did not make victory easy for The Texas Rattlesnake. It took Austin three chair strikes and a Stunner before he could successfully throw his opponent over the ropes.

In August of 2002, Kane made his fury-filled return from injury in August of 2002, interrupting the Canadian team The Un-Americans as they attempted to desecrate the American flag in the middle of the ring. Booker T and Goldust had first attempted to stop the heinous display, but when their efforts failed, Kane – clad in a new mask and ring attire – stormed to the ring and took matters into his own hands: He singlehandedly dismantled the stable, shaking off a chair attack from Christian and chokeslamming Test to the mat. This drove The Un-Americans back to the locker room and, in addition, kicked off The Big Red Monster’s brief alliance with Booker T and Goldust.

Eliminator
In 2002, The Big Red Machine was selected to compete in the first-ever Elimination Chamber Match in Madison Square Garden at Survivor Series against Triple H, Shawn Michaels, Booker T, Chris Jericho and Rob Van Dam. While the carnage raged inside the steel structure, The Devil's Favorite Demon was left to bide his time in his pod. When his number was called, Kane did not disappoint – he blasted into the ring and immediately laid waste to his opponents, felling Jericho with quick strikes and flattening Booker with a body press against the ring post. For the finishing touch, however, the monster hurled Jericho through one of the empty Plexiglass pods, leaving Y2J a crumpled mess in the corner while the 7-footer continued to bring the heat to his opponents.

In 2003, Kane held the Intercontinental Championship and squared off against World Heavyweight Champion Triple H in a match that would unify the two titles. The Cerebral Assassin went on to defeat Kane in the match, but Raw's co-GM Eric Bischoff granted a rematch on the condition that The Big Red Machine would unmask should he lose. Interference from Triple H's Evolution teammates cost Kane the match, and, despite pleas of protest from Rob Van Dam, The Devil’s Favorite Demon honored the agreement and exposed his deepest, darkest secret to the WWE Universe.

Resurrection
The Big Red Monster went on to compete without his mask for eight years, even capturing the World Heavyweight Championship at Money in the Bank 2010. And yet, by his own admission, there was something missing in his approach. Before a match with Randy Orton in July 2011, Kane vowed to the WWE Universe that he would exorcise his humanity and return to the monstrous ways of his past, but an injury at the hands of World Heavyweight Champion Mark Henry cut his efforts short. Later in the year, strange videos began to play showing Kane in isolation while his old mask burned, promising a “Resurrection” of sorts. Finally, at the Dec. 12th episode of Raw SuperShow, after four weeks of the cryptic messages, The Big Red Monster returned with a brand-new mask, attacking John Cena and paving the way for his next reign of destruction.