The award pretty much went to the WWE Universe watching the 2011 Slammy Awards on Monday night. WWE fans were rapt by the golden grapplers, a year’s worth of highlights, distinguished Superstars and Divas taking the stage, and plenty of returning faces – one obscured. The resulting 53 Twitter trends mean the WWE U. opined heavily, especially after beholding the hellish homecoming of the scarlet red aberration, Kane.

The “Lita” of the pack
There’s really no other way to say this. The four-time Women’s Champion looked just as hot as she did when she retired from ring competition in 2006. A well received presenter of the Divalicious Moment of the Year, Lita made a rare appearance on Raw SuperShow and came within inches of the current gold standard of the Divas division, The Glamazon. Pulses raced as WWE fans anticipated a possible confrontation between Lita and the Divas Champion with Slammy Award winner Kelly Kelly in the middle, but the retired high-flyer refrained from any moonsaulting onslaughts.

Along with the Diva with a license to thrill, Lita’s fellow Attitude Era alum Road Dogg (Oh, you didn’t know!?), plus WWE Hall of Famer “Million Dollar Man” Ted DiBiase and even Goldust made cameos at the presenter podium on Monday. Alas, none are eligible for the WWE.com exclusive Slammy, Return of the Year, which went to The People’s Champion. Missed the non-televised golden grappler honors? See the complete 2011 WWE.com Slammy Award list.

@YasmineSaleh: Lita should have won, just because she showed up. #RAW

@LawnPoke: Who drove Lita to #RAW?

@swaggeroffools: The Million Dollar Man and Foley should be teamed up 24/7 for my amusement. #raw

@SadieandCompany: Nice to see Rey-Rey...but Not as good as seeing Goldust!!! #RAW

@Big_Bad_Tom11: Instead of calling it the #Slammys, it should have been called Monday Night Return, last night on #Raw

@Shar316: Omg its Lita! I used to idolize her when I was little :') great to see her! @AmyDumas #slammyawards #raw

@Clare_Hardy_HHH: Did CM Punk give a shout out to Lita's dog last night!? #Raw 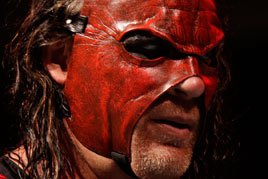 Kane’s choke-slammy return
Good thing Lita wasn’t on stage when the arena became cloaked in a red glow, signifying the resurrection of her ex-husband (you forgot?), Kane. It was difficult to determine whether WWE fans were more excited about the mask or the chokeslam the 7-footer delivered to John Cena when The Big Red Monster returned on Raw.

And what about that mask? (No, not the first iron-cast covering which seemed inspired by both Jason X, Predator and Tony Stark’s Mark-1 suit.) The horrifically leathery face shroud of The Devil’s Favorite Demon was frankly grotesque. Maybe it was the crimson lighting – throwing way back to October 1997 when Kane first debuted beneath the mask at Badd Blood – or maybe it was the simply the layered skin look of his new, ghoulish mask. Probably both. But The Big Red Monster was utterly terrifying on Raw. Now to figure out exactly why, of all people, he elected to annihilate John Cena. Why? And what – or who – is next?

@JohnLaryngitis: The part of Casey Jones will now be played by Kane. #TMNT #Raw

@darren0411: Who marked out last night when Kane returned to @WWE #Raw

@ForeverInvolved: I had a huge Mark Out moment when KANE came out. But I wish he had the 1998 mask. The original masked Kane! #RAW

Punk’s “Touch”-ing tribute to Laurinaitis
The 1980s riffs of relatively unknown rocker Stan Bush accompanied a warming tribute from WWE Champion CM Punk to Raw Interim GM and EVP John Laurinaitis on Monday night. Extracted from the dramatic Autobot-Decepticon clash between Optimus Prime and Megatron in “The Transformers: The Movie” in ’86, “The Touch” was the perfect ballad for The Straight Edge Superstar’s montage of mulleted in-ring madness from Laurinaitis’ hey-day decades earlier.

Of course, the music video also profoundly captured the touch extended from the Executive Vice President of Talent Relations (and former Dynamic Dude) to a roster of Superstars and Divas, plus the WWE Universe at large … Go ahead, argue otherwise after watching the tribute.

@pudang: I think we need the Dynamic Dudes to reignite the tag division. #Raw

@BenJMorse: Let me reiterate: THERE WAS JUST A JOHNNY ACE MONTAGE SET TO THE TOUCH FROM TRANSFORMERS ON #Raw. Wrestling has peaked.

@themikeposey: John and #transformers DO NOT belong in not only the same sentence but the same universe together. That song has forever been tarnished #raw

@timegan2: Whoever greenlighted The Touch by @stan_bush for Johnny Ace is freakin' legend! Give that man a raise! #raw #iwantwrestling @mibredclaimer

@VBartilucci: if "You Got The Touch" does not become @WWERawGM John Laurinaitis' theme song as of next week, I Quit Wrestling Forever. #RAW

@JoeyStyles: Mike Adamle just watched that segment and emailed his resume to WWE.

@MichelleDBeadle: The awkward moment when I realized I'm wearing the same thing as Hornswoggle. Blushing. #SlammyAwards

@TonySchiavone: I feel bad for Jim Ross. If he just would have taken my advice and contacted P.N. News he would totally have won the Rap Off. #RAW #Slammys

@ OmfgItsKogsy: #RAW #SlammyAwards HOW did cm punk leaving with the title not win OMG moment? Not happy.

@Greta_sXe: If the superstar of the year goes to Cena, i riot. Just saying #Raw #SlammyAwards

@RedHurricane24: Last year, Christian showed up with a sling. This year, he's in crutches. Gotta love that he keeps up a theme. @wwe #raw

@Ravishing_Raven: Zack Ryder is trending first. Woo Woo Woo, you know it. #raw, but wait so is Tony Atlas.....Hope Ryder gets this. :)

@ H2HCrelly: Snooki put over Zack Ryder, I now like her #WWE #Raw