Here are my takes on the noteworthy developments in WWE over the past week:

Talking point: Zack Ryder has a big night on Raw

Eck’s Factor: Everyone’s favorite “broski” sure has come a long way. It wasn’t all that long ago that he couldn’t even get on TV. On this past Monday’s Raw, not only was Ryder all over the program, but he defeated World Heavyweight Champion Mark Henry (with a big assist from John Cena), wrestled a competitive match against Cena before ultimately losing, and hit his finisher on arch rival Dolph Ziggler after Ziggler’s match against Sheamus. 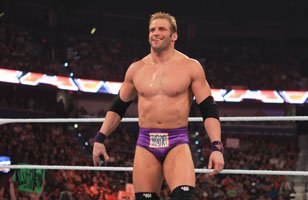 The thread throughout the show of Ryder having to overcome major obstacles to get another U.S. Title shot against Ziggler – which put his friendship with Cena to the test – told a good story and made Ryder look like a star. I did have a couple issues with it, however. For one, I wasn’t thrilled about Ryder getting a pinfall victory over Henry, who has been effectively built up a monster heel. Despite the fact that Henry was selling an ankle injury and Ryder needed Cena’s help to win, I think the loss weakened Henry’s aura. I also think that WWE needs to be careful not to overexpose Ryder. The WWE Universe clearly likes Ryder and wants to see him, but they may not want to see him quite as much as they did Monday night.

Talking point: John Cena gives up his spot in the TLC Triple Threat Match for the WWE Title

Eck’s Factor: After John Laurinaitis went back on his original decision and gave Cena an opportunity to earn a spot in the TLC main event, I think everyone assumed it was a foregone conclusion that Cena would be in the match. When Raw ended Monday night, however, Cena was on the outside looking in. After defeating Zack Ryder to qualify for the WWE Title Match at TLC, Cena voluntarily gave up his place in the match so that Ryder could have another opportunity to earn a U.S. Title shot. So as it stands now, Cena is not booked on the Dec. 18 TLC pay-per-view. Unless there is a twist on this Monday’s Raw and Cena somehow ends up regaining a spot in the match – which currently is a Triple Threat between WWE Champion CM Punk, The Miz and Alberto Del Rio – I don’t see a logical opponent for him at TLC. Interesting. On a side note, I thought Cena did a great job of giving a rub to Ryder on Raw. From wearing Ryder’s merchandise to giving him so much offense in their match, Cena was very generous. 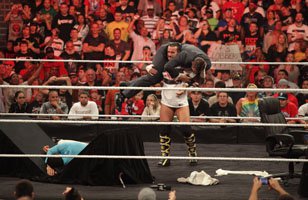 Eck’s Factor: As Punk rightfully pointed out on Raw Monday night, contract signings are one of the biggest clichés in WWE. Leave it to Punk to make the contract signing for his WWE Title defense against The Miz and Alberto Del Rio in a TLC Match the most entertaining segment on the show. I loved how Punk noted that all contract signings have to end in a pier six brawl (a term he got trending on Twitter), and then he not only initiated the attack against the two heels, but he took them both out. John Laurinaitis wishing John Morrison well in his future endeavors during the segment and then asking the three competitors to join him in a photo op after the contract was signed were nice touches, as well. 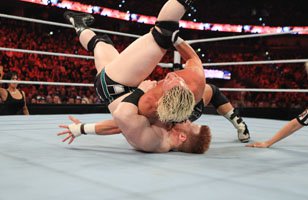 Eck’s Factor: Sure, Ziggler was the only one of the three Superstars who needed to win a qualifying match on Monday’s Raw in order to land a spot in the TLC Match for the WWE Title to be unsuccessful, but just being in the mix elevated him. During the opening promo segment, Ziggler was standing alongside John Cena, The Miz and Alberto Del Rio, and he definitely looked like he belonged. It’s apparent that Ziggler’s mic skills and overall presence are finally catching up to his outstanding in-ring ability.

Eck’s Factor: Growing up in the ’70s, I looked forward all week to Saturdays because that was when WWE’s two syndicated shows aired. “All-Star Wrestling” came on at 11 a.m. and “Championship Wrestling” was on at 4 p.m. Now there is going to be an entire network devoted to this genre. It really is amazing when you think about it, and I can’t wait for the network to launch. My wife, on the other hand, doesn’t seem quite as thrilled.

Talking point: Superstar of the Year nominees are announced

Eck’s Factor: You could make a case for any of the six nominees (John Cena, Alberto Del Rio, Mark Henry, The Miz, Randy Orton and CM Punk), who all had terrific years. However, the prestigious award – which will be given out during next week’s Slammys episode of Raw – will be determined by online voting, which means that it’s basically a popularity contest. That pretty much eliminates Del Rio, Henry and Miz.

Cena has to be the favorite, but my vote would go to Punk. He turned WWE on its ear this summer and consistently delivered in the ring and on the mic. He participated in a number of entertaining pay-per-view matches, including an epic battle against Cena at Money in the Bank that was perhaps the Match of the Year. And even though he was out of the main event scene during the first six months of the year, Punk did have a memorable rivalry with Orton that culminated in an outstanding match at WrestleMania XXVII. (CAST YOUR VOTE HERE FOR SUPERSTAR OF THE YEAR)

Eck’s Factor: After a two-year hiatus, Lilian returned as the full-time ring announcer on SmackDown this week. No offense to her, but if there was one ring announcer that I would bring back on a regular basis, it would be WWE Hall of Famer Howard Finkel.

WHO IS KEVIN ECK?
For those who are unfamiliar with me, I come to WWE from The Baltimore Sun, where I was an assistant sports editor and the author of a pro wrestling blog titled Ring Posts. In between two stints with The Sun, I worked as the editor of WCW Magazine from 2000 to 2001.

Follow Kevin Eck on Twitter at Twitter.com/KevinEck_WWE. Eck will be live tweeting during Raw on most Mondays.