On Raw SuperShow, boos and booleans revealed a good deal about John Cena’s resolve in the “Pit” of despair as well as the WWE Champion’s Googling habits. Amid all the talk, John Morrison couldn’t walk out of the arena following an awesomely aggressive assailant’s onslaught.

Man on a Miz-sion
No need for a game of “Clue.” It was The Miz with a lead pipe outside the conservatory (a.k.a. Raw SuperShow stage). Repeatedly striking John Morrison’s right leg with the dense weapon, Miz as Colonel Mustard brutalized his ex-tag team partner prior to their Falls Count Anywhere Match. Add a kendo stick assault, a face-first trajectory into an oversized steel “WWE” logo and a Skull Crushing Finale on the stage; you’re left with the second former associate to fall to The Awesome One’s hostile wrath. (WATCH)

The first was R-Truth, who Miz vanquished just a week before sending Morrison from limp to gurney excursion out of South Carolina’s Colonial Life Arena on Monday night. As The Awesome One alluded to in a WWE.com exclusive video last week, he’s shrugged off the excess weight and no one is safe. But given the theme of his attacks, you wouldn’t want to be a one-time ally of The Miz. Sorry, A-Ry.

@LiLiReynolds: All I want 4 Christmas is for Morrison to return to wwe next yr #MickFoley #Raw #RawChristmas

@FlawlessEvE1: Miz channeling his inner-Sandman with the Kendo Stick #Raw

@Kat_PunkMizfit: #Mizfits in case you missed it, @mikethemiz had an #AWESOME night. He kicked the crap out of morrison, and it was great:] @WWE #Raw

@Smalls0629: Why did Johnny Ace just come out to look at Morrison then just walk away? #weirdo #Raw @WWE 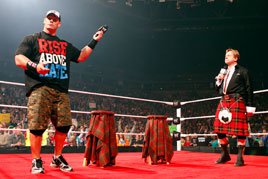 Slapping sense into Cena
The so-called “face of WWE” turned redder than the signature carpeting on “Piper’s Pit” as the oft jeered John Cena responded to Hot Rod’s pleas to get it all – his feelings, frustrations, fears – off his chest. As the boos of WWE fans have only grown louder for the proud, dogged 10-time WWE Champion, Cena resolved to (as his T-shirt suggests) “rise above the hate.” More impressive, the Cenation leader rose above an eyebrow-raising slap to the face from Piper. The WWE Universe was conflicted about the unexpected hit from the kilted and respected Scot, who came closer than many to forcing the camo-shorted Superstar to the breaking point.

Nonetheless, Cena absorbed The Rowdy One’s openhanded wake-up call, instead emphasizing that no matter the magnitude of Miami’s contempt at WrestleMania XXVIII, the Cenation leader can and will overcome The Rock. Does he need a reboot first?

@513boy4life: @R_Roddy_Piper knocked some sense into cena with that slap! #RAW

@SWMcryotek: Here is the thing: people like Cena as a person but boo him because of his booking. Same with HBK in 96. Man was booed out every night. #Raw

@Ustareth: I respect Cena for being hard-working, never complaining, and never thinking he's better than anyone, but I love to boo him. #RAW @WWE

@1ofakind2k11: @WWE #Raw that slap that @R_Roddy_Piper gave @JohnCena just gives me chills. Piper did all he could to rile up @JohnCena - Classic Piper!

@jenbearbaby: John Cena was NOT happy after that slap to the face... Then again, who would be? @WWE #RAW

@ladaan: How you gonna slap John Cena? That was so unnecessary! #WWE #RAW

@GKickPerry: #Raw It's fun to boo Cena. What can I say?

@StephenZieman: If anyone can slap some sense into Cena, it's Piper! #PiperSlappedCena #Raw 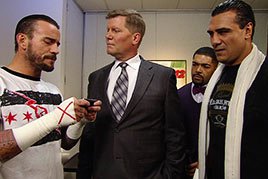 Punk (search) engineers Jennifer Hudson joke
You tested it for yourself, didn’t you? As soon as WWE Champion CM Punk spouted out search engine stats, you Googled John Laurinaitis, Alberto Del Rio and David Otunga. Of course, searching for “David Otunga” may not actually yield results based on his fiancée Jennifer Hudson (exclusively) as The Straight Edge Superstar cited; you actually get pages like this.

Before his first successful WWE Title defense, “The Voice of the Voiceless” took some slight artistic liberties for the sake of a good zing, but he’s the WWE Universe applauded the blustering of the bowtie clad Harvard grad at the reference to his “Dreamgirl.”

@NotBarryEdgar: I also try google where Mr. Otunga went to school but @CMPunk was right, all I get is Jennifer Hudson @WWE #Raw

@RealKeithRandy: Yea CM Punk call that fool out about not doing nothing but being married to Jennifer Hudson. #WWE #RAW

@jordannstweet: Woah he just dropped the Jennifer Hudson Pipebomb on O'Tunga did you see his face! #Raw

@Rock02013: "Otunga, I googled your name but only got something about Jennifer Hudson". Hahahaha!!! @WWE #RAW @CMPunk is the man!" I agree!

@richlopez82: What do you know, @CMPunk was right! John Lauranitis is boring, Del Rio is spineless & Otunga = Jennifer Hudson. #Raw

@SueBrittany: Jennifer Hudson what on earth were thinking you are better than Otunga #raw @WWE I got accepted to harvard too...it's just another school

@crabapplekidd: The best thing about that divas tag match was watching beth phoenix and natalya come out and jog around the ring. I love them. #raw

@JoshBottomley24: #Raw Rowdy Roddy's back, The Miz has gone mental, and Morrison got GOT! Been a good show so far

@sarahmcgarr: the only reason i like wade barrett is because he has a hot british accent. #wwe #raw

@aj0314: Okay, so Cena punks out, Miz dominates, and Beth & Nattie run around in sweat and training clothes. Good hour of Raw so far. :) #WWE #RAW

@iKessling: What was with the random run in with Beth and Nat? #WWE #Raw