The WWE Universe was perhaps more vocal than it’s ever been inside the revered arena known as The Mecca of Sports-Entertainment, Madison Square Garden, on Sunday night. Twenty-four hours later, the theme continued in Hershey, Pa., and on Twitter in response to a “watershed” moment for Cody Rhodes, the unexpected collapse of The “Awesome Truth” and a mystifying video montage featuring the long absent mask of Kane.

The mystery of Kane’s mask
No longtime WWE fan will ever forget the mask that once concealed the ghastly face of The Big Red Monster for the first half of his WWE career. This is exactly why when the symbolic shroud appeared in a chilling video on Raw SuperShow, the WWE Universe exploded in speculation about the possible return of the hellfire and brimstone-born Superstar, beneath the mask not seen since 2003.

But wait just a moment. While the images in the footage were clearly of Kane’s former face gear and though the hulking fiend seemed to resemble The Big Red Monster, it’s still unclear what it all actually means. Is it Kane or could it be another twisted force, perhaps even The Undertaker? The theories have already begun to form on Twitter.

@aBeeBitMyBottom: looks like #Kane is on his way back! #WWE #Raw

@FanKentonVP: Just re-watched that Kane Promo.FREAKY AS HECK.I hope this means he comes back psychotic or with a new mask. @WWE #RAW

@RonArcher667: @UnholyA7X what was up with the dude that broke the mirror? Was that Kane?#WWE #RAW

@rizamariezatef: @Starship_Pained it could be Taker but i think it's Kane. #Raw #SuperShow

@Lital_Devul: KANE Coming soon to #RAW near you

@DGKfilms36: If you looked close, when the man looked in the mirror it looked like he had a full goatee...could it be Undertaker!?!?? #wwe #RAW 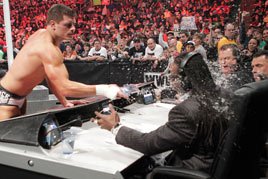 Tell me Rhodes did NOT just do that!
Somebody should’ve told the Intercontinental Champion that the blaze of Harlem Heat went out years ago. Perhaps then, “snarling” Cody Rhodes wouldn’t have disrespectfully doused Booker T with water at the announce table. The second-generation Superstar claimed to be “unbeatable” then backed it up with a decisive win over Santino Marella on Raw SuperShow, but watered down his credibility with such an insulting act to a retired ring legend like Booker T, a five-time (five-time, five-time, etc.) WCW Champion plus World Heavyweight Champion in WWE. (WATCH)

Was it Booker’s supposed “biased reporting” as cited by Michael Cole? Probably not. Rhodes made a splash, but certainly cost himself placement in Book’s “Fave Five” for the foreseeable future, if not worse.

@RamonVillalobos: SOMEONE GET COLE A TOWEL! A man of his integrity shouldn't be wet by Booker T's water! #Raw #Colemining

@night_wolf_34: Rhodes just proved how insane he is throwing water on Booker like that. #RAW #SuperShow

@CSmooth4: @BookerT5x is gonna show Cody Rhodes why he is the 5 time champ @WWE #Raw

@DAsharpshooters: You dont throw water on Booker T and get away with it, Cody Rhodes. It’s on like Neck bones. #WWE #RAW 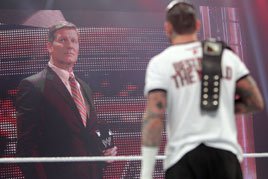 CM Punk references “Office Space”
As one of 31 WWE Twitter trends, “The Best in the World” CM Punk was warmly received just 24 hours after capturing the WWE Championship at Survivor Series – mostly because of what Punk promised now that he’s back on top, partly due to his likening of Interim Raw GM and EVP John Laurinaitis to cult icon Bill Lumbergh from “Office Space” (without any of the comedy).

The new WWE Champion wanted more than to know where the hell the WWE ice cream bars are; he advocated for the removal of Laurinaitis. (WATCH) WWE fans seemed to agree that the general manager’s matchmaking is the equivalent of Lumbergh’s TPS reports and weekend overtime, but most cannot wait for The Straight Edge Superstar to fulfill his guarantee to be an “agent of change.”

@JohnLaryngitis: Punk will have to write an apology on WWE.com for calling him a stooge. #Raw

@austin1212: Punk raises a good question. Where the hell are those WWE Ice Cream Bars? #Raw

@PrototypeIV: Johnny Ace has a wildside and is an agent of change. #Raw

@NY_Giantsrock: Someone get @CMPunk his WWE ice cream bars. #RAW

@RealAlexxAlexx: Dolph Ziggler is like a wrestling Unicorn. Magical and majestic. Like words can't describe it. #Raw

@XcuseMe_BrieFly: @WWE Randy Orton is a beast and just walked out there all boss.! #Raw

@BRAVO_229: "Roota to the toota to your fruity booty"...another brilliant lyric from R-Truth. #WWE #Raw

@TravisAlbers1: #Raw Big Show wants to end it for good i can't blame him

@ForeverInvolved CM Punk and Dolph Ziggler is having a great match.....DID YOU SEE THAT DROPKICK! Can you say Textbook? #RAW

@oheytrevor: So... Remember when everyone would wonder if Zack Ryder was gonna be on #Raw? I don't think that's a problem anymore.

@MarkinOut: I wish I knew girls who played video games like that! #WWE12 #WWE #Raw #HOT

@RyanGradler: @WWEgames Last night Survivor Series tonight #RAW then heading to Walmart to pick up #WWE12...awesome time to be a WWE fan!