When the WWE Universe rang the WWE doorbell on an All Hallow’s Eve edition of Raw SuperShow, the treats were aplenty and the tricks – well, amid Monday night’s masquerading and Muppets, those sort of backfired on The “Awesome Truth.”

Sheamus related to Beaker?
Bushwhacker cousins Luke and Butch are officially no longer the most oddball relatives to appear in WWE. The chance crossing of paths between Sheamus and meek Muppet Beaker led to the revelation that their resemblance is no coincidence. When the indiscernibly squeak-talking Muppet struck up a conversation in the locker room, The Celtic Warrior demonstrated his ability to “speak Beak,” expressing his regret to be missing an upcoming family reunion then sufficiently teasing the tall red tufts atop the Muppet’s head. Looks like Edge was right about “The Great White” and his roots all along. (WATCH)

Spiky ginger hair, milky complexion. You know this “Aunt Teresa” of theirs must be one pretty lady. Yep.

@RyanD427: Hmmm.. The Sheamus skit with Beaker was awesome. I could definitely see the family resemblance #RAW

@BobbyMitchellDX: I thought that was pretty cool that Sheamus showed Beaker how to take care & spike his hair #WWE #RAW

@mylandro_: @WWE If not that, can we at least see Beaker and Sheamus as a tag team? Pass it onto Teddy, he loves him some tag action. #wwe #raw #muppets

@theNEWaltruist: @WWE Did Beaker really just interfere in a match?! Arquette must also be walking out with the belt tonight... #RAW 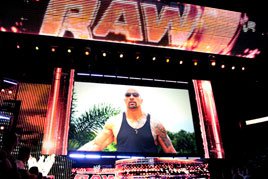 The Rock says … yes!
Never before, never again. Partnering up for the first and last time, John Cena and The Rock have formed the most charismatic tag team in WWE history. And it all went down at the start of Raw SuperShow with The Great One’s address in which he first seemed to deny (with a vehement “hell no!”) then embrace Cena’s request for Survivor Series.

While the WWE Universe’s curiosities are high for the pairing’s ability to coexist prior to their clash at WrestleMania XXVIII, one man who was noticeably angered by the announcement was The Miz, one-half of Rock & Cena’s opponents on Nov. 20. In an exclusive WWE.com video capturing footage of what you missed during the commercial break on USA Network, the awesome former WWE Champion rendered a strongly worded statement to the returning Brahma Bull.

Sticks and stones, Miz. And after his showing in the final moments of Raw, he’ll need to step up his game because some members of the WWE U. don’t believe The Awesome Truth stands a ghost of a chance.

@Shaheed17: @WWE #RAW Something has got to give at survivor series since Cena and Rock don't like each other! Those two are like up and down. No Mix!

@_BigBossPaul_: The Rock... The great one returns to in ring action Nov 20 in msg for survivor series and I'm going to be there. WWWYKI #RAW

@BROCKGUFFMAN: So Cena took out both R Truth and Miz ..why does he need Rock?.. #raw

@Shaheed17: @WWE #RAW Something has got to give at survivor series since Cena and Rock don't like each other! Those two are like up and down. No Mix! 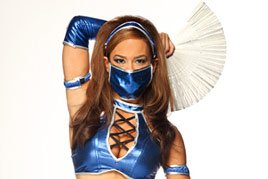 Divas in disguise
While Eve was the clear-cut winner of the No. 1 Contender’s Diva Halloween Costume Battle Royal, it was hard to pick out which Diva’s costume was most impressive. In action, AJ’s slightly shorter rendition of Mortal Kombat’s Kitana couldn’t quite “FINISH HER!” opponents, but WWE fans tended to at least dig her ninja-like disguise. The video game theme was hot on Monday night with The Bellas under the mustaches of Mario and Luigi. The sisters failed to get the 1-UP in time before both were tossed out of the battle – mamma mia! – and dispatched like Joker and Penguin by the Boy(ish) Wonder, Robin (a.k.a. Eve).

Missed the costumed competition? Watch the footage of the bout that earned Eve a future Divas Title Match, then be sure to catch the exclusive interviews with the Halloween femme fatales, plus a photo gallery featuring them in their All Hallow’s Eve gear.

@littleinz: Aj on #Raw dressed as Katana made me laugh so hard! She's the best diva by far!!!

@uni_fof84: Don't know about you, but the Super Mario Bellas got my vote! #WWE #Raw

@RaccoonFrenzie: I love Eve's costume of Robin, but where is the batman. : @WWE #Raw

@BennettBrand504: @EveMarieTorres can be the Robin to my Batman anytime ;) @WWE #Raw 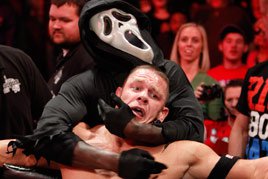 R-Truth cast for “Scream 5”?
What do John Cena and Neve Campbell have in common? No, they’re not both Canadian. West Newbury, remember? Nah, they’ve each conquered a certain masked madman with malevolent intentions. In a “Scream” costume, R-Truth – who we’ll refer to as “Ghostface Killings” to make the Wu-Tang Clan reference – took a stab at foiling the Cenation leader’s main event clash with The Miz. (WATCH)

At first, the WWE Universe thought that perhaps a fellow WWE fan had let the spirit of Halloween get to their head, but by the time the “Scream”-faced foe felt the fury of an Attitude Adjustment, it became quite apparent that it was all a Billy Loomis-esque plot of The “Awesome Truth” and, more importantly, there’d be no sequel to this horror show, much less at Survivor Series.

@Bill_Baconhill: It's Old Man R-Truth! And he would've gotten away with it if it wasn't for you meddling CeNation! #wwe #raw

@andyhou10: Scream 4 would have been the greatest horror movie of all time if R-Truth turned out to be the killer #Raw

@FearlessRiOT: Nice of R-Truth to dress in the most played-out Halloween costume in history in order to try to cost Cena his match. #WWE #RAW

@x3MEGANyo: Omg I thought the person in the scream costume was a random person lol how crazy would tht hv been. #ItWasJustRTruth... @wwe #raw

@THEGlamFan: OMG @RealKellyKelly kissed Kermit - she went after another girl's man, so unclassy! She deserved a major karate-chop for that! #RAW

@submarine_racer: @CMPunk I'm already training my thumb to click the remote every time I see Nash next Monday on #RAW.