Why would The Rock team with John Cena?

On Monday’s WWE Raw SuperShow, John Cena announced that he wanted The Rock to be his partner against The Miz & R-Truth at Survivor Series — a choice that has many WWE fans scratching their heads. After all, isn’t The Great One the man who cost Cena his WWE Title Match against The Miz at WrestleMania XXVII? Didn’t he once call the Cenation leader a “big fat bowl of Fruity Pebbles?” Isn’t he the Superstar who will be standing across the ring from Cena at WrestleMania XXVIII in the most anticipated bout in WWE history?

Why in the world would Cena want this man in his corner?

More importantly, why would The Rock want to help out a guy who he once compared to Barney the Friendly Dinosaur?

It may be an unlikely pairing, but The Brahma Bull is no stranger to unlikely pairings. At the 2001 Survivor Series, The Great One joined forces with rivals like Chris Jericho and The Big Show in order to combat the invading forces of the WCW/ECW Alliance. Perhaps The Rock will notice the similarities between that vicious faction and the destructive team of The Miz & R-Truth. Both squads were out to take down WWE and that’s something The People's Champion simply won’t allow. 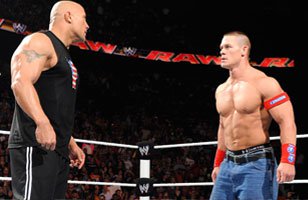 Or maybe The Great One will recognize the opportunity to shake off some ring rust.  Sure, The Rock may be The Most Electrifying Man in All of Entertainment, but he hasn’t had a legitimate match in more than seven years. A Superstar who has been in the ring every night would barely be able to hang with the Cenation leader. What chance does a guy who hasn’t locked up since George Bush was in office have?

And if The Brahma Bull wants to scout his WrestleMania XXVIII opponent, there’s no better way to do it than to stand in the ring with the man. Sure, the iconic Superstars trade verbal jabs in the squared circle and have even came to blows on more than one occasion, but there’s nothing that compares with going bell to bell with another competitor. Does The Rock want to know Cena's strengths? His weaknesses? If he fights next to him in the most famous arena in the world, he'll learn everything he needs to know about The Cenation Commander-in-Chief.

So will The Great One agree to team with his rival? Or is he too comfortable in his custom trailer on the set of “G.I. Joe: Retaliation?” WWE.com can’t say for sure, but we’ve never seen The Rock back down from a challenge before.