What if The Rock says no to John Cena?

Amid all the excitement and anticipation of tonight’s public response from The Rock to John Cena’s offer to team with him against The Miz & R-Truth at Survivor Series on Nov. 20, few WWE fans have stopped to ask one very important question — “What if The Great One says no?”

The Rock turn Cena down? It’s not out of the question. And if you listen to the buzz going around the Raw locker room in Atlanta’s Philips Arena right now, you’d believe that’s likely what’s going to happen. (How do you think The Rock will respond? Vote now!)

Sure, there are plenty of reasons why The People's Champion could agree to stand in his rival’s corner against The “Awesome Truth.” For one, it would be the perfect place to make his return to the ring. After all, He made his WWE debut at the very same event (Survivor Series) in the very same arena (Madison Square Garden) 15 years ago this month. And The Brahma Bull would love to slap the taste out of The Miz and R-Truth's mouths as much as anyone.

But let's face one important fact — The Rock does not like John Cena. He made that clear when he nailed the Cenation leader with a Rock Bottom during the main event of WrestleMania XXVII, costing Cena his WWE Championship Match against The Miz. The People’s Champion smashed The Awesome One that night too — a clear sign that The Brahma Bull has no love for either Superstar. 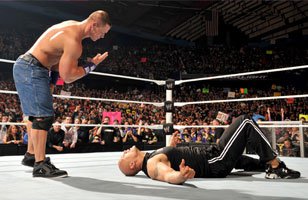 And The Great One has no real need to support Cena at Survivor Series. Yes, it's important that The Rock get back in the ring and shake out the cobwebs before he faces the Cenation leader at WrestleMania XXVIII, but The Brahma Bull is still Hollywood's biggest action star. The night Cena made his offer, Dwayne Johnson was sitting in a massive trailer on the set of G.I. Joe: Retaliation patiently waiting to lay the smackdown on hundreds of unfortunate extras dressed in soldier costumes. Should The Rock leave this fantasy world behind to tag team with a guy he doesn't even like against a pair of dangerous competitors who would love nothing more than to rearrange his matinee idol looks?

When you stop and think about it, The Rock would be crazy to accept Cena's challenge. The only thing awaiting him in Madison Square Garden is pain and humiliation.

So where does that leave John Cena? There aren't many potential partners for the West Newbury, Mass. native in the Raw locker room. CM Punk is gunning for the WWE Title. Triple H is in the ICU. Zack Ryder might've been the next choice, but The Long Island Iced-Z proved he wasn't ready for The "Awesome Truth" when they ambushed him last week.

So who's left? John Morrison? He hasn't won a match since the summertime. Santino Marella? He's still feeling the effects of his September car accident.

Come to think of it, Cena better hope The Rock says “yes.”