Is Raw descending into anarchy under John Laurinaitis?

When many Superstars, Divas and officials walked out of Raw earlier this month because they thought working under WWE COO Triple H was unsafe, they rallied for change on Monday nights. John Laurinaitis became Interim Raw General Manager when Mr. McMahon relieved Triple H of the day-to-day duties of running the show. But has the volatile environment actually improved on Raw?

The EVP of T 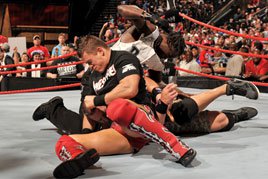 These disorderly occurrences are on par with (if not worse) than what occurred when WWE COO Triple H was running Raw. While Laurinaitis has intervened to stop Awesome Truth’s and Nash’s attacks, they happened while Raw was under his watch. And although he listened to the WWE Universe when they pleaded for J.R.’s return, Laurinaitis was absent when Cole leaked the humiliating photos. If these types of anarchic situations keep occurring, is Laurinaitis doomed to fail?

Laurinaitis seems to have lost control of Raw. If neither Triple H or Laurinaitis can handle such a wild working environment, who can? Is there anyone with the capability to restore the safe working conditions the Superstars, Divas and officials were once accustomed to on Monday nights?