Before the wreckage of the collapsed Vengeance ring could even be collected, Raw SuperShow charged forth with Superstars and Divas now motivated by survival. Now en route to Survivor Series, a quick-tongued CM Punk and an outraged John Cena took steps toward the renovated Madison Square Garden in just four weeks. Now, with great anticipation, the WWE Universe wants to know if The Rock will, in fact, BRING IT beside his Fruity Pebble-flavored foe turned “frenemy” for one night at Survivor Series. 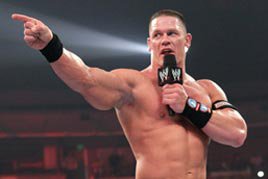 Cena selects The Rock as a potential Survivor Series partner
Less than 24 hours after Vengeance, John Cena was still looking for some on Raw SuperShow. After enduring R-Truth’s now dreaded Evian water bottle to the skull – the most hydrating hit in all of sports-entertainment – Cena’s match against The “Awesome Truth” was a wash. Empowered by Interim Raw GM John Laurinaitis to pick any partner to face The Miz & Truth at Survivor Series, the Cenation leader had an epiphany; a Brahma bull-shaped epiphany. (WATCH)

Much like the rest of the WWE Universe, Cena salivated (but literally – did you catch his microphone spittle?) at the vision of him and The Great One whoopin’ some candy-sweet tukkis in the World’s Most Famous Arena. As the “Reunion” star stated, it won’t be out of friendship. Will The Rock respond to an opportunity to lay some serious smack down at Survivor Series, exactly 15 years after his debut at this very event in New York City?

@Fostew: One of my favorite moments from RAW! Should be good to see the Rock make an appearance next month! #WWE #RAW

@Ronaldo_Unaiza7: @WWE #Raw Rock Cena VS Awesome Truth at #SurvivorSeries Ooohh It's On!!!

@ShiningbieberXO: Rock and Cena are gonna be are hell of a team. Awesome Truth be scared very scared like you already are @wwe #raw

@aj0314: The Awesome Truth will bring the whoopin' and The Rock and John Cena will bring the.. well, you know. WHAT A MIZFEST AT MSG!!! #WWE #RAW

@Pinkcess_Ash: So bizarre that Awesome Truth are going to be in a match against Cena & The Rock...since when are they at that caliber of greatness?! #RAW 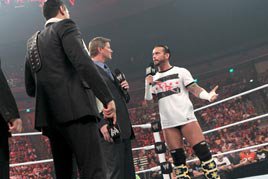 “Kentucky Waterfall” Punk’s downfall?
Much to the viewing audience’s delight, CM Punk unleashed a WWE career’s worth of zings upon Executive Vice President John Laurinaitis. They were all the things that you know The Voice of the Voiceless has been clamoring to say in public – mocking Laurinaitis’ “majestic voice” and his “Kentucky Waterfall mullet,” as well instructing him on the proper way to hold a microphone.

Laurinaitis’ circa 1990 mullet was business in the front years ago, but the Interim Raw General Manager is all about business nowadays. Though tongue twisted over the term “WWE Universe,” Laurinaitis used his authority to put any consideration for Punk’s potential WWE Title Match with Alberto Del Rio on hold till next week. (WATCH)

Did CM Punk’s mouth cost him a title bout? However entertaining, The Straight Edge Superstar’s jibes may allow the WWE Champion to ride off scot-free in his 2009 Maserati GranTurismo (EZ Pass included). With Laurinaitis deliberating until next week, Punk professed his pure dislike for the EVP in a WWE.com exclusive interview. Watch and see the root of the tattooed competitor’s problem with the Raw GM, who Punk describes as the best “corporate a**-kisser” today. So much for R-E-S-P-E-C-T.

@nickphillips97: @cmpunk Kentucky Waterfall Mullet Has to be on a t shirt. @wwe #Raw

@StraightEdgeIAm: How can Punk respect a man who barely said the word "Universe?" #RAW

@CenaOrtonBaby: "Tell me that you respect me!" "Who are you Aretha Franklin?" I love Punk & his antics! #PipeBomb #PunkForChamp #Raw

@Baileex3: The only thing I look forward to when Alberto Del Rio comes out is seeing what car is driving.. @WWE #RAW

@BacardiMachismo: back of the line amigo #RAW

@MilaNtent2Rule: @JohnCena had his chance....back of the line. NO EXCUSES! BRING ON @CMPunk #1Contender #LongliveCMPUNK #raw @wwe 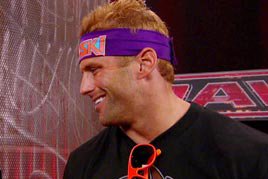 Ryder reaches the (carrot) top
We all know how much Long Island Iced Z digs his colors. But did anyone expect him to break out a new, orange hue to his hair spikes?

Zack Ryder was ready to embrace the big time on Raw SuperShow, scheduled to compete in his first-ever main event clash – just one night after his first-ever singles match on pay-per-view. Of course, this milestone was hindered by an attacking “Awesome Truth” but not before the WWE Universe was distracted by the “are you serious” glow to his now gingery gelled mane.

WWE fans expressed varied opinions on his latest look. Guess it’s not really all that drastic. It could’ve been purple.

@MickieManiac: Zack Ryder being in the main event was to good to be true! *sigh* #WWE #Raw

@Blader09111: what if sheamus admires @ZackRyder and stole his hair? #RAW #WWWYKI @WWE

@JackKorpela: @WWE Something tells me Nash is going to regret hitting HHH with that sledgehammer when it's all said and done. #Raw

@sausagemohony: @JohnCena I aint a Cena fan, but I am not a Cena Hater. but your new shirt I will get. kudos to you Cena. @WWE #raw

@rlewis042106: @WWEUniverse #RAW Cole wanting to challenge @JRsBBQ (again), and if he loses, he quits?!? #areyouseriousbro

@DarealKnightman: #KevinNash look's like a Killer with that sledgehammer #RAW

Share your voice with the rest of the WWE Universe on Twitter by using #RAW and check back next week for another edition of The Day After Raw.