For the first time in history, WWE’s premier Monday night program aired from Mexico City. In any language – even the Spanglish transmitted from the lips of The Miz – the action of Raw SuperShow amplified tensions heading into Vengeance.

The Miz habla español
The “Awesome Truth” may have some serviceable talent in rap lyrics – as demonstrated by their rude, remixed entrance beats (FULL STORY) – but The Miz himself isn’t the leading linguist, especially in Spanish. Drolly taunting the Mexican members in attendance with his ill-accented version of the native language, Miz’s most successful moment came after John Laurinaitis and officials said “adios” to Triple H.

Despite a defeat at the hands of CM Punk, The Awesome One’s Skull-Crushing Finale on a soloed Straight Edge Superstar sent a stark message to Vengeance opponents Punk and The Game, who was ejected over a suspicious immigration paperwork mishap by “the office.” In an exclusive post-show interview (WATCH), Interim Raw GM Laurinaitis addressed the foreign visa fumble, but some WWE fans still believe that this is all part of a masterful plot to see Triple H fall as COO. ¡Dios mío!

@b_anomalous: Oh Miz, you saying shut up to everyone in Spanish makes me laugh. It doesn't sound natural for you at all. #WWE #Raw

@ohnoitsyasmin: Miz, your spanish be on point, boi. #RAW

@xmrsmizanin: MIZ IS SPEAKING SPANISH AND IT'S HOT AS HELL #Raw

@ComedianMarcus: Since the #WWE is in Mexico for #RAW tonight, do they have to spell Triple H as Triple J so that the people will pronounce it right?

@jknoxville: #RAW Triple H got deported out of Mexico!? 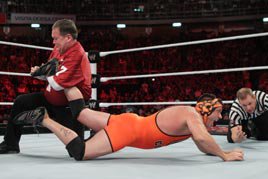 Michael Cole, married?
Just moments before his (failed) main event tussle against Jim Ross & John Cena, in an effort to curry favor with the Mexico City audience, Michael Cole revealed that his wife is Mexican. Expression of shock cluttered Twitter – not at Cole’s cultural versatility, but rather at the fact that the maddening commentator is actually married.

If he’s telling the truth, his fair lady must really, really like the color orange. Safety orange – which is exactly what the brightly adorned Syracuse University alum clung for while trapped in Jim Ross’ ankle lock.

Yes, there’s a soul mate out there for seemingly everyone. Though some folks might question whether Cole even bears a soul (not to mention the ring not previously noticed on his finger), trust that he does have one. After all, no soulless creature would own a skull-heavy Chihuahua and coo at it like Michael Cole does. (True story. Don’t ask.)

@aj0314: MICHAEL COLE'S WIFE IS MEXICAN!!! SHE MUST BE A MEXICAN GODDESS TO BE WITH A GOD OF COMMENTATING!!! OLALE, SENORITA!!! #WWE #RAW

@TattooedJuggalo: LOL at Michael Cole telling the fan's in Mexico City, Mexico that his wife is Mexican and they have to cheer for him. #WWE #RAW

@orange_josh: Michael Cole is an insult to the color orange #raw #wwe

@AKidNamedTeeTee: Wait a minute...Michael Cole has a wife????? @WWE #RAW

@IamMeiber: ''My Wife is Mexican so you have to cheer for me'' - Michael Cole , #RAW #Supershow

@beck85ig: Cole is married??? Poor woman. What did she do to deserve that punishment??? #Raw

@melannielove: I think everyone in the arena is embarrased to be in the same room than orange jumpsuit clad Cole aka Orange Traffic Cone #RAW LAME. 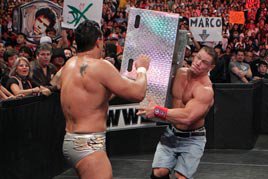 Who will be the Last Man Standing?
John Cena might be sitting on an 11-time WWE Championship reign. The Cenation Commander-in-Chief & Jim Ross thrashed victory out of Alberto Del Rio & Michael Cole in Mexico City, where even Del Rio’s countrymen could barely stand the snobby aristocrat.

The win was accentuated by Cole’s tapping to J.R.’s ankle lock submission hold – a fate he was bound to confront “Sooner” or later – but more so embellished by Cena’s emphatic Attitude Adjustment to the WWE Champion, all just moments before his masochistic revelation. (WATCH) At Vengeance, it will be Del Rio defending against Cena in a Last Man Standing Match, an encounter of Cena’s choosing. However, is the Cenation the minority in the WWE Universe in preliminary WWE Championship clash predictions for Vengeance this Sunday? Who do you think will be the Last Man Standing and WWE Champion? Will Cena revert to the dreaded duct tape wrapped ‘round the ringpost “FTW”?

@horrorshowfame: Last man standing match at #vengeance, this should Be good. #raw 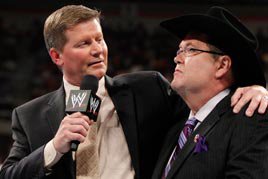 Laurinaitis jokes “suffering succotash”
Perhaps inspiring The Miz’s Spanish flavor later in the night, John Laurinaitis kicked off Raw with an insincere “¡que pasa!” to the Mexico City crowd on WWE Raw SuperShow. But the EVP quickly shifted his in-ring irreverence toward Jim Ross, erroneously citing the WWE Hall of Famer’s signature J.R.-isms. After rehiring Ross (to the delight of the WWE Universe), Laurinaitis mocked the Oklahoman with a line about “suffering succotash” … though those who actually suffered were WWE fans subject to the jibe about the veggie-laden side dish.

Somewhere in the shadow of a bird cage, Sylvester the cat snickers.

@ThatGuyT1E: Glad to see J.R. back, though... That was just for John Laurinaitis to b able 2 say he did something for the WWE Universe. #RAW

@newstouse: even in Mexico.... people can realize that Jack Swagger has a LISP..... sufferin' succotash... #RAW #WWE

@IslandQueen24: Dear John Laurinaitis: You are NOT funny!! #Raw

@EMcG3624: Every time I see or hear John Laurinaitis, I want to punch a hole in my TV. Please @WWE for the love of God, #GetRidOfLaurinaitis! #Raw

@martini__89: #raw mason Ryan is a big monster he is so cool

@MattTaylor75: #Raw Vengeance will be a killer PPV!

@danniebear87: Yes!! WrestleMania Rewind won. I voted for that #Raw

Raw results, July 13, 2020: Sasha Banks & Bayley have the last laugh ahead of The Horror Show at Extreme Rules