Can CM Punk and Triple H co-exist at Vengeance?

This Sunday at Vengeance, CM Punk will team with Triple H to take on The Miz & R-Truth. (PREVIEW) With their tumultuous recent history – which included vicious verbal attacks and physical altercations inside and outside of the ring (and throughout an area) – will The Straight Edge Superstar and The Game be able to put their past differences aside and work together to achieve success in the tag team bout?

After weeks of verbal barbs by CM Punk against Triple H and his family, they faced off in a No Disqualification Match at Night of Champions. It was an incredibly physical and personal contest, which started abruptly after Punk assaulted Triple H during his entrance. Despite interference from The Miz & R-Truth and Kevin Nash, the Cerebral Assassin was victorious, allowing him to keep his position as WWE COO.

The next night on Raw, John Laurinaitis attempted to fire CM Punk, but Triple H fired The Miz & R-Truth and announced The Straight Edge Savior would face John Cena and Alberto Del Rio at WWE Hell in a Cell. The move by the WWE COO was somewhat surprising, considering the intense conflict with Punk that unfolded in the ring the night before.

In the Triple Threat Match at WWE Hell in a Cell, Del Rio pinned CM Punk to win Cena’s WWE Championship. But after the match, the fired Miz & R-Truth emerged and attacked all three competitors, as Triple H tried to restore order. While Punk was not pleased about his loss and the chaos that transpired afterward, he did not appear with the many Superstars and Divas on Raw the next night when they voted “no confidence” against Triple H. In fact, on the following Raw, he joined The Game, Cena and Sheamus in the ring when the WWE COO insisted the show must go on as other Superstars were participating in a “Solidarity Rally.” Punk even borrowed Triple H’s suit jacket and sat at the announcers’ table to do commentary! It was because of their match at Night of Champions that the Cerebral Assassin earned his rival's respect. Punk believed someone else was trying to sabotage the WWE COO's position on Raw. But how far will The Straight Edge Savior's respect carry when they get in the ring as teammates on Sunday at Vengeance?

But after Mr. McMahon relieved The Game of his duties as WWE COO on Raw that night, Punk competed in a tag team match that Del Rio ditched, leaving him to fight the rehired Miz & R-Truth alone. Outnumbered, The Game rushed to the ring to help Punk fight off “Awesome Truth” – his own act of “solidarity.” New Interim General Manager John Laurinaitis suggested that they team up to face the conspiracy theorists at Vengeance. The question immediately surfaced: Will Punk and Triple H be able to get along? 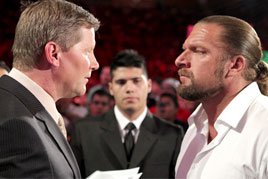 Finally, most recently on Raw in Mexico City, the WWE COO was in Punk’s corner as he faced The Miz, but Laurinaitis informed The Game there were problems with his work visa, and he was forced by immigration to exit ringside, leaving Punk to be double-teamed by “Awesome Truth.” While the Straight Edge Superstar won the match, the ambush by R-Truth & The Miz left him nearly helpless, especially without assistance from his unlikely new ally, The Game.

The rivalry between these two Superstars has been personal and intense. However, Punk has stood by Triple H’s side when other Superstars’ faith in him waivered, and The Game has helped The Second City Saint when he found himself outnumbered in the ring. While their history is indeed rocky, they have assisted each other when they’ve needed it most. But can they put their differences aside for long enough to earn a victory this Sunday at Vengeance against R-Truth & The Miz?