Kelly Kelly has had enough.

It’s been more than a week since the feisty competitor brutalized Divas Champion Beth Phoenix in a fit of rage on the Oct. 3 Raw SuperShow and still she’s fired up by the mere mention of The Glamazon and her crony, Natalya.

“They’ve been torturing me and making me miserable for the last few months,” she told WWE.com in the locker room of Dallas' American Airlines Center. “Losing the title [to Beth at WWE Hell in a Cell] just topped it off. The next night, I let my frustrations get to me and I just let out everything I’ve been holding back.”

By the looks of her attack on Beth, Kelly had been holding back a lot. In a moment that many WWE fans likened to demonic possession, the perky blonde kicked and screamed as she unleashed hell on Beth Phoenix, repeatedly slamming The Glamazon’s head into the business end of the announcer’s table. (WATCH)

It was an aggressive side the friendly Diva suppressed for some time. Transitioning from the pages of bikini magazines to the WWE rings of Extreme Championship Wrestling in 2006, Kelly Kelly was an impressionable teenager when she first entered the rough world of sports-entertainment. Fun loving and naive, she made mistakes early like painting an American flag on her bare chest and dating the walking carpet known as Mike Knox. The Florida native soon found her way, though, developing as a singles competitor before finally capturing the Divas Championship in June of 2011.

But Kelly’s crowning achievement soon became a cross to bear when she was targeted by Beth & Natalya — two women who believed it was their purpose in life to “save” the Divas division. Labeling the beautiful blonde as a sham champion, the powerful duo offered Kelly no respect, routinely attacking her after matches and dismissing her as nothing more than a model trying to pass for a grappler. 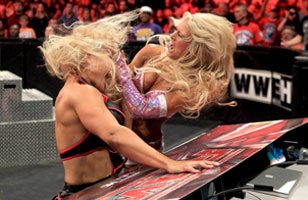 Kelly weathered the abuse with the help of her good friend Eve and even beat Beth on two consecutive occasions, but something changed inside of her when The Glamazon defeated her for the Divas Championship at WWE Hell in a Cell with some outside help from Natalya. (PHOTOS)

“I was pretty devastated about how it happened,” Kelly admitted. “I felt like I got cheated out of the title and there was nothing I could do.”

Of course, Kelly did do something when she smashed Beth on the Raw SuperShow, revealing a ruthless side of herself that the WWE Universe hadn’t seen before.

“I’ve never done anything like that and I don’t know where it came from,” she said immediately following the incident.

The perfect blonde may have surprised even herself that night, but looking back now, she’s acutely aware of where "it" came from. In the five years since she debuted as a grinning exhibitionist, Kelly has fought back against negativity and naysayers to earn the respect of not only WWE fans, but the Divas locker room and she's not about to let her tormentors take that away from her.

“After five years, this is finally my time,” the determined Diva said. “I’m going to take it and I’m going to show people that I’m not just a pretty face.”

Sounding more confident and gritty than she ever has, Kelly made it clear that she will not settle until she reclaims the Divas Championship. And to the woman currently holding that title, she has this to say:

“There's much more of this side of me to come.”