An evening that began with emptied arena halls ultimately ended up filled with clashes – verbal and ring-fought – and despite the rallying Superstars outside the building, WWE Raw SuperShow featured faces not seen in some time.

Night of returns: McMahon, The Miz and R-Truth
The WWE Universe expected a fairly slim assortment of performers given the “Solidarity Rally” (EXCLUSIVE PHOTOS) but instead, they witnessed the Raw SuperShow returns of The Miz and R-Truth, plus Mr. McMahon himself. Relieved of his duties himself months ago, McMahon arrived to do the same (but at a lesser degree) to WWE COO Triple H, who no longer has governance of Monday nights.

The WWE Universe was conflicted about The Chairman’s key revelations that no McMahon can run Raw and, thus, an Interim General Manager would fill the crucial role: John Laurinaitis. This chain reaction yielded the re-emergence of freshly rehired rogues Miz and Truth, accompanied by a well received remix of their insult-laden rap lyric.

@Rhysn_94: Last night on #raw was one of my favourites, Vince Returns and the Miz and Truth return.

@JeSuisMyka: Vince McMahon... You have been missed! Great to see him back! @WWE #RAW

@James_Varga: John Laurinaitis is a troublemaker. Truth and Miz back? This should get good. #RAW

@Hyperred: @WWE how does the superstars feel now that the miz and r truth are back I guess it's still unstable work place still #SuperShow #RAW

@DeaconKirby: Now is this an attack of the Mcmahon Family.... Someone doesn't want any Mcmahon in charge #raw

@Alexandra__Z: @WWEUniverse It was Awesome! Best part=Miz is back , Least favorite= John Laurinaitis is running #raw

@kwmalley317: Can't the #RawGM rehired Miz and R-Truth on #Raw

@Furious_Furry: Oh I am so happy #Miz and #RTruth are back on #RAW! The ONE thing Laurinaitis has done right. #AwesomeTruth 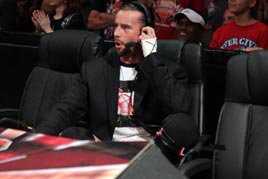 CM Punk, one-man announce team
The pipe bomb more closely resembled a headset on Raw SuperShow as CM Punk took to the abandoned commentary booth at ringside for The Game’s makeshift opening contest. Slipping on Triple H’s suit jacket (loosely fitting on Punk’s tattooed frame), The Voice of The Voiceless didn’t miss a colorful beat from his days beside Michael Cole and Jerry Lawler in late 2010.

On a night of noted returns, the Indian-styled seated Straight Edge Superstar’s reestablishment at the announce table was the most eagerly embraced. Especially with the termination of Jim Ross later in the evening, it may have even planted the seed of hope that perhaps one day the likes of Cole would be forever banished in lieu of The Second City Savior’s commentary salvation.

Speaking of J.R., the WWE Hall of Famer was none too pleased following his terse dismissal on Monday night, as seen in the WWE.com exclusive video. Naturally, Cole’s rude, disrespectful “adios” to Ross made matters worse. Watch the footage you didn’t see on Raw.

@MrsHeathSlater: Bleh. Laurinaitisblahblah. >.< Meh, I would've been ok just having Punk on commentary all night. #Raw

@yasminewaleed: RT if you want Cm Punk On Commentary instead of Michael Cole !! #Raw

@straight_edge76: Not sure what's going on, but Punk on commentary is always good. #RAW

@Purple_Raw94: The Pipebomb is back! Punk on Commentary  #Raw 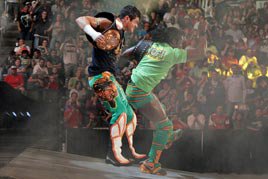 But is it all for the better? Or is Air Boom’s focus straying too far from competition for the WWE fans’ tastes?

@BryanIsWWE: #RAW #RAWSuperShow YAY!! Air BOOM has their own theme now & it's not just the beginning of Evan's theme and the rest of it being Kofi's

@dsan96: Okayyy! Air Boom get their own music, titantron and side screen thing! They seen like a real tag team! #RAW @WWE

@Fightsandphilip: New song for Air Boom hoping this means the team is in it for the long run! #raw

@cultofpedoness: lol orton with a paper bag on his head. #raw

@ImAMelFo: Orton looks better with a paper bag over his head. He should think about keeping that look. #raw

@MochacianaMarch: @WWEUniverse I don't know if anyone's ever asked this but...Was the Anonymous GM AND his laptop part of the walk-out too?! O.o #WWE #RAW

@prettybaby69: No extreme close ups when Vickie is screaming! #RAW

@CenaxFan4Life: Alberto enjoy ur 2 weeks with www title Coz cena is about to take that @wwe #Raw @wwegames

@flashleeb: Actually quite like Sheamus these days. Human jar of mayonaise puts on a decent show. #RAW