Before nearly all of the locker room and crew walked out on WWE COO Triple H on Monday night, several Superstar returns – one, strangely, without unibrow – and Kelly Kelly’s seeming demonic possession on WWE Raw SuperShow stirred the buzz on Twitter.

The votes are in: no confidence
A resounding vote of “no confidence” may have crippled the confidence of WWE Chief Operating Officer Triple H on Raw, but the WWE Universe seemed to be rallying behind The Game and his efforts. If not discernible in the “Triple H” chant within the Cajundome, the voices on Twitter were clear in their support of the 13-time World Champion. Many cast their votes in 140 characters or less while others noted the conspicuous absence of several key names – such as John Cena – at ringside for the live locker room vote.

Take a look back at the footage and see if you can pick out any other missing faces in the crowd engulfing The Game. (WATCH)

@TeamMysterio: @Christian4Peeps speaks for the Superstars: NO CONFIDENCE. #WWE #Raw

@OriginalKingD: I was about to do shoutouts but my keyboard has voted no confidence and is walking out #RAW

@RaveHound: Can I vote no confidence too? @WWE #Raw

@Skywarpgold: lol, everyone, including the cameramen just walked out on Trips in a vote of no confidence. #RAW #WWE

@ipukeglitter19: #TripleH has my vote of confidence!!! #WWE #Raw #SmackDown 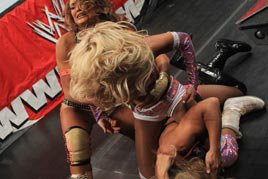 Berserk Kelly Kelly needs exorcism?
Eve should take thorough notes during a screening of both Regan MacNeil and Emily Rose’s cinematic exorcisms, if there’s to be any hope for Kelly Kelly. Aggressively ravaging The Glamazon (who took it like Scott Farkus in “A Christmas Story”), Kelly’s shriek-filled, golden hair-whipping assault was a sight to see – though not necessarily hear – on Monday night. (WATCH)

Either the former Divas Champion is possessed or she’s joined the Red Lantern Corps (in which case, expect rage-fueled scarlet bile spewing next week). Alright, so maybe she’s just really, really angry at the way she lost the butterfly emblazoned title at WWE Hell in a Cell. No matter, Beth Phoenix beware!

@BungleNoMore: The hell? Someone get Kelly an exorcist. @WWE #RAW

@HellcatPerez: Wow, That's a side of Kelly i never thought i'd see! #Raw

@BobbyMitchellDX: Um...to quote Booker T. WHAT DA HAYELL...was that?! I did LOL though when Yelly...I mean Kelly yelled right in the ref's face #WWE #RAW

@TheBatman_: #WWE #RAW Kelly sounds like a car skidding out of control!!

@SkyDiamondz_RKO: Kelly will get her title back #Raw 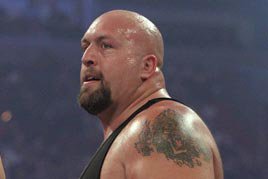 Big buzz surrounding Big Show’s return
Big things are poppin’ and the tyranny of The World’s Strongest Man might be stoppin’ come SmackDown this week. When Big Show returns, WWE fans expect the 7-foot giant to confront World Heavyweight Champion Mark Henry and deconstruct his mortar and agony-based “Hall of Pain.” Worlds collide on SmackDown and the WWE Universe is a little conflicted as to which mastodon will survive the next potential extinction level event.

@dreamxstreet16: I thought Big Show's head was mounted on Mark Henry's wall. Now either Show returns Friday headless or someone sure fooled me.. #WWE #Raw

@WWEDominateRigg: Big Show Returns this Friday #Smackdown and it gonna be some Knockout Moments that night! @WWE #RAW

@chris7johnson: cool the big show is back on friday he wants mark henry. :D #WWE #RAW 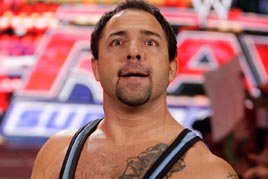 Santino’s unibrow wished the best in its future endeavors
The WWE U. needed a little laughter amid the ruckus of Raw SuperShow and no one delivered quite like Santino Marella, who reemerged after injuries sustained in a car accident weeks ago. (EXCLUSIVE PHOTOS) The Itallion Stallion didn’t miss a step in his bout and comedic preamble with Jinder Mahal though he was missing his signature unibrow!

Marella’s freshly manicured eyebrow region was a topic of chatter on Twitter by those wondering why the strip of fur upon the Superstar’s brow was, essentially, released and wished the best in its future endeavors (or growths).

@OriginalKingD: Santino came back with more muscle, new attire, dyed hair and missing a unibrow.... somebody wants Beth back #RAW

@Broncofan515: Santino and the cobra is back! But what happened to the unibrow? #raw @WWE

@MattCarlins: As great as Mark Henry is right now, Randy Orton deserves a lot of credit too. He may be the best thing going in @WWE. #Raw

@MickieManiac: Poor Drew. I remember when Vince said he would be a World Champion. Doesn't look like that as this rate. #WWE #Raw

@KeithColgate: Best line of the night JUST SHUT UP AND FIGHT @WWE #RAW

@ROrtonsVoice: Us Voices are out of control! The voices are in chaos mode! The Voices can't be tamed! #WWE #RAW

@JxSupermanxK: Way to show em up h---shut up n fight just what all us want to see #RAW

@jasonandtracy: Amen to that! RT @WWEgames: Triple H to the complainers "Shut up and fight!" @WWE #Raw

@ROrtonsVoice: One RKO is never enough. That's why #OneMoreRKO is a must #WWE #RAW

@FansOfDeadman: love when orton gets very mad and scary! makes him even better! @WWE #raw