Vickie Guerrero finally made a deal with Jack Swagger, adding him to her stable with Dolph Ziggler. But their new partnership was put to the test on Raw SuperShow this week.

While Swagger helped the United States Champion successfully defend his title against Zack Ryder, their team crumbled when joined by a defiant Mason Ryan in a match against WWE Tag Team Champions Evan Bourne & Kofi Kingston. Vickie could do nothing but watch the mess unfold. Are these problems a sign of a tumultuous partnership between this trio of hotheads? Or will their larger-than-life personalities fuel their success?

WWE.com first went to the mastermind behind the trio, Raw's resident cougar, Vickie Guerrero, to talk about her plans for Swagger, and how Ziggler fits into the revamped picture.

“Well my plan for Jack Swagger is to become a champion. I’m not sure which championship we are going to work for, but with him being on our team, and Dolph being the United States Champion, we’ll find him a championship to steal,” Vickie said.

Swagger told WWE.com he’s very excited about his future with Vickie as his new manager.

“Vickie Guerrero adds a lot of things to Team Swagger. One of those is a little political clout to help get the momentum swinging back on my side,” The All-American American explained. “I am an amazing athlete and I don’t need help from a lot of people, but a little political swing from the GMs or whoever can help me out a whole lot.”

While Swagger has plenty of confidence, Ziggler is skeptical about the future of the partnership, proving these two egos could clash.

“I’m actually not a big fan of Swagger’s work. I’ve seen him become World Champion and it’s actually very forgetful to most people because it seemed like he didn’t deserve it at the time,” Ziggler claimed, quickly changing the subject to himself.

“As the fastest up-and-coming Superstar in all of WWE, I think all focus should be on me and about me,” the United States Champion proclaimed. “I think Vickie will be a little distracted with another client and I just don’t think she should be wasting her time.”

Despite his success, could Dolph be jealous of Vickie’s new relationship with Swagger? Vickie seemed unfazed by the idea.

“I am the boss and if Dolph doesn’t like it, he has no room to complain. I have helped him become the United States Champion and if he would just listen to me and cooperate then we’ll all be a great team and we can all work together,” she said with conviction.

Vickie's confidence is certainly rubbing off on The All-American American, who is pleased with his new role under the persuasive femme fatale. He, too, isn’t worried about Ziggler’s feelings on the matter.

“Right now, it looks like we could be unstoppable with the team that we have. The sky is the limit and that’s what we are shooting for,” Swagger smiled. 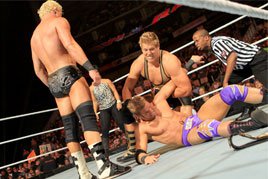 But will two Superstars be one too many for Vickie to manage?

“If anyone can handle two Superstars at once, it’s Vickie Guerrero. She is an empowered woman. She can handle anything,” Ziggler argued, once again turning the conversation back to none other than himself.

“Although, I think it’s a bad move to do anything besides focus on the new, up-and-coming soon to be WWE Champion,” Ziggler said.

Naturally, Vickie has no qualms about her multitasking capabilities when it comes to being WWE’s managing maven. (VICKIE PONDERS A SUPER STABLE)