Hell was raised – and lowered too, actually – on Monday night as the steel Hell in a Cell structure made its ominous descent in the final moments of WWE Raw SuperShow – a lingering symbol of what awaits the WWE Universe this Sunday on pay-per-view. Despite Chief Operating Officer Triple H’s greatest attempts to save WWE from fiery chaos, it may soon be out of his hands and subject to the law. At least, that is, if you ask David Otunga.

The Game gives a “woo woo woo”
The WWE COO had already delivered an authoritative speech in an attempt to rein in the Superstars and distributed a hefty $250K fine to The World’s Strongest Man when he was confronted by three disgruntled employees – Intercontinental Champion Cody Rhodes, U.S. Champion Dolph Ziggler (with Vickie Guerrero) and Christian.

Triple H doled out his form of justice by placing each of them in matches, among them Ziggler versus Zack Ryder for the U.S. Title. The sight of The Cerebral Assassin leaning in to deliver an unexpected “woo woo woo—you know it!” (complete with high-pitched alto) sent the internet broskis into a frenzy – a mix of friendly and furious – on Twitter.

@TheMaverickMJ: you're right, this is unacceptable. HHH only fines the bad guys. when heels are wronged, they have to fight @ZackRyder WWWYKI #raw

@SESavior: Woo Woo Woo You Know It is ruined for me now... #wwe #raw

@TinyCena: hhahahah @ZackRyder hhh just quoted woo woo woo u know it! ur up for a great match!! Winning!!! #RAW 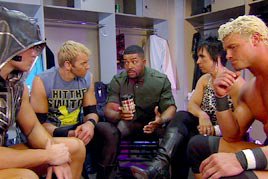 David Otunga, attorney for hire?
Clarence Mason is filing for personality infringement somewhere after watching Harvard Law graduate David Otunga’s advocacy for legal action by a throng of discontent WWE Superstars. The obnoxious former attorney-turned-manager represented some of WWE’s most notorious thugs, not too unlike Otunga’s pitch to rally the commiserating collective to potentially file a lawsuit against WWE COO Triple H.

His fashion faux pas aside, Otunga talked pretty big game in the locker room and it seemed to resonate with Rhodes, Ziggler, Vickie and Christian. (WATCH) But do the rest of the Superstars and Divas agree that the working conditions in WWE are more hazardous than should be expected for risk-taking athletes of the ring? WWE.com’s cameras caught up with a number of squared circle warriors to discuss their confidence in the abilities of the COO.

@Craig_J_85: Otunga is a Tom Jones song away from being Carlton Banks. #RAW #

@NobueIto: Why is Otunga wearing an ugly green shirt and a bow tie? This doesn't make you look very lawyerly, David. #WWE #RAW

@PINFALLMagazine: Otunga clearly doesn't have a degree in fashion. Laurinaitis has trouble with the word influence... Why are either on my television?

@IAmWWEman: David Otunga is hopefully a way better lawyer than he is WWE Superstar. #RAW

@Youngy54_: It's a sad day when Christian is getting advice from David Otunga. #RAW 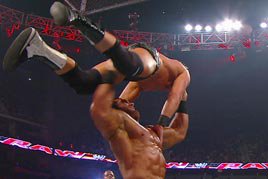 Mason Ryan’s monstrous move
There was ample buzz in all directions once Vickie Guerrero hustled to the ring with the massive Mason Ryan to even the odds of a six-man tag bout. The WWE Universe’s distaste turned to appreciation as the Welsh-born warrior turned against the loathed Jack Swagger and Dolph Ziggler, who felt the brunt of the brute’s display of strength. (WATCH)

With Ryan’s gorilla press-meets-side slam, the world’s jaws dropped almost as hard as the U.S. Champion himself. The power move earned Ryan the embrace of the WWE Universe and, accordingly to some, a sure-fire “Broski of the Week” nomination on Ryder’s “Z! True Long Island Story” YouTube show.

@DSB_IV: Whatever Mason Ryan just did to Dolph Ziggler...WOW #Raw

@Podswoggle: Mason Ryan is one smiling Welshman who looks like you set your created wrestler muscles to 100 everywhere. #wwe #raw

@Oklasooners20: Mason Ryan I officially love you!!! You did the right thing!!! @WWE #Raw 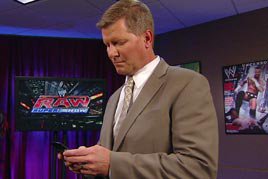 Who is Laurinaitis texting?
The accusations cast by CM Punk one week ago that Executive Vice President John Laurinaitis is somehow puppeteering the disorder in WWE still linger. The EVP of Talent Relations has drawn a lot of suspicion simply by his frequent, conspicuous texting (or emailing) by his mobile device – often at the worst possible moment. It continued on Monday night immediately after Laurinaitis’ locker room conversation with David Otunga.

Certainly, Laurinaitis’ wireless service provider is benefitting most from the executive’s persistence in staying connected, but the WWE Universe would like to know exactly who’s on the receiving end of those messages. Even more important, what is the subject matter of those notes? “The eagle has landed.” “Winning!” “LOL.” Without prying the phone from his hand, we remain in the dark.

@kittiegirl12: I want to know who he's always texting...Vince, Stephanie, or someone else? #wwe #raw

@TheCMPunkyGirl: Beth has it Sunday. She absolutely has it. Then again I’ve been saying that the past 2 months #RAW !

@ItsKiddo: The cell has been lowered! Cooooool!!! #WWE #RAW

@ACinthe715: If the Hell in a Cell was made by the devil, @WWE must have promised him Michael Cole's soul and at least 15 John Cena world title runs #RAW

@AliiAlsaeed: Cena vs. Alberto vs. Punk for the @WWE Championship at Hell in a cell :D! #RAW