Sheamus calls out the “cowards” of WWE

If you watched Sheamus and John Cena’s table-splintering clash for the WWE Championship at WWE TLC in 2009, you probably wouldn’t expect these two Superstars to ever join forces, let alone protect one another from harm. Yet, as The Cenation Commander-in-Chief was being pummeled by the sinister foursome of Christian, Jack Swagger, Wade Barrett and United States Champion Dolph Ziggler on this past Monday’s WWE Raw SuperShow, The Celtic Warrior was shockingly among Cena’s rescuers.

As the old adage goes, “The enemy of my enemy is my friend.” Indeed, Sheamus has garnered his fair share of adversaries since his 2009 WWE debut, including Cena’s attackers on Monday night. But has the Dubliner shelved his well documented animosity for his red-shirted rival?

“You know, fella, for a long time I believe I was a bit misguided,” Sheamus said. “When I came to WWE, I only cared about making a name for myself, and I went after Cena because there was no bigger star than him.”

With a callous demeanor that has earned him the intimidating nickname of “The Great White,” Sheamus began his career by ruthlessly brutalizing the likes of Cena, Triple H and Randy Orton, enjoying the opportunity to mangle the WWE Universe’s most celebrated figures. However, after standing up to Mark Henry this summer, Sheamus garnered newfound appreciation from those same fans that cheer Cena whenever he hits the ring. In turn, Sheamus has come to respect the Cenation leader.

“Cena’s one of the toughest opponents I’ve ever faced,” the two-time WWE Champion admitted. “He’s tough as nails and he never backs down. He’s the heart and soul of WWE, but he’s also a man that we all want to knock off the perch.”

The Celtic Warrior teamed up with Cena for the first time ever on the inaugural WWE Raw SuperShow to square off with SmackDown malcontents Christian & Henry. The former rivals stood united in victory that night, and would do so again the following week after joining with Alex Riley and John Morrison to battle Cena’s quartet of attackers in an Eight-Man Elimination Tag Team Match.

Following that triumph, the ivory-skinned aggressor was surprisingly complimentary of The Prince of Parkour despite their many clashes, including their encounter at Survivor Series 2010, their collision in the final round of the 2010 King of the Ring Tournament and their brutal No. 1 Contender’s Ladder Match at last year’s WWE TLC.

“Here’s the thing with Morrison,” Sheamus explained. “I’ve put that man through ladders, I beat the hell out of him at Survivor Series, and I’ve beaten him to a pulp all over the United States and Europe, but he always came back for more. Any man that gets beaten down and still wants to come back for a fight deserves an award in my book.” 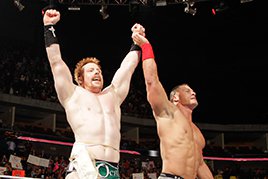 Now that he seems to be adhering to Cena’s signature virtues of hustle, loyalty and respect, is the WWE Universe seeing the emergence of a kinder, gentler Sheamus? Will we ever spot him strolling down the streets of his native Dublin donning a Cena “Persevere” shirt to match his fiery red hair? Don’t count on it, fella. What Sheamus will do is continue putting the “cowards” in WWE on notice – particularly Christian, who orchestrated a failed retaliatory attack against The Celtic Warrior SmackDown.

“Christian cost me the World Heavyweight Championship against Randy Orton a couple of months ago on SmackDown when he failed to count to three,” Sheamus said of his June 3 clash with The Viper, which had been officiated by the bitter Canadian. “I haven’t forgotten that, and I won’t forget it.” (WATCH)

WHAT DO YOU THINK?
Do you believe Sheamus’ apparent alliance with John Cena last? Will Cena’s WWE Raw SuperShow attackers retaliate against The Great White? Share your thoughts with the rest of the WWE Universe on Facebook and Twitter.