Did enough go down last night on the first-ever WWE Raw SuperShow? The collective voice of the WWE Universe was booming on Twitter and throughout the official WWE Live Chat – and, no, that’s not a reference to the WWE Tag Team Champions’ new team name.

@RockAdam: only way @WWE #RAW could've been better was if @RealKevinNash came out to the nWo Wolfpac theme - or if @TheRock was there, lol

It seemed like a purposely bold statement by Kevin Nash to make his controversy-laden Raw arrival to the tune of the original nWo. Many viewers familiar with the riffs of the notorious rebel group salivated after the dose of nostalgia, hoping that perhaps the 7-foot former WWE Champion wouldn’t have arrived alone – similar to the days of his black-and-white clad regime. The infamous music also fueled speculation about the possible reformation of The nWo, a theory which really cannot be discounted at this point.

Speaking of which, did anyone else notice that Nash’s T-shirt starkly resembled the pattern of the top he wore when nWo first emerged in WCW in 1996? Coincidence or a well-crafted tease by the big man? Join the ongoing discussion on Facebook.com/wwe.

For those that don’t know much about The New-new-new World Order, peek at the abridged history lesson and read more about potential Superstars who might soon embrace the nWo’s theme music should the group soon return. 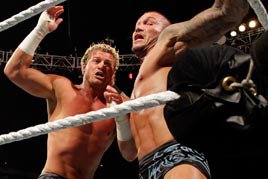 WWE Raw SuperShow kicks off with Orton vs. Ziggler

@ImAMelFo: You're watching @HEELZiggler at his finest. The future of this company. The WWE Championship is in his future. #RAW

@BrockK: What a match by @RandyOrton & @HEELZiggler on @WWE #RAW! it felt like a true main event even if it was the first match. Excellent!

The era of the WWE Raw SuperShow kicked off right with World Heavyweight Champion Randy Orton against U.S. Champion Dolph Ziggler, a former World Champion himself, technically. The WWE Universe has seen crossover action like this in the past, but The Game’s announcement that SmackDown Superstars would be inter-mingling with Raw’s competitors on Monday night made it official for the foreseeable future. Frankly, after The Viper’s bout with Ziggler, it piqued interest in the opportunity for all-new match-ups like theirs that will steal the show. Of course, not to take anything away from the main event tag clash that put John Cena and Sheamus on the same squad. The possibility of two World Champions competing on the same show, from week to week? No complaints here.

@missjoella75: No offense to @WWE fans but Air Boom is a really silly name for Evan Bourne & Kofi Kingson. #RAW

@wa1kinthezf33t: #RAW so glad the Anonymous GM is gone, it was so annoying. the best part of a GM is to show up n be seen, not be [hiding] behind emails

@tiltedscuff: I am so tired of seeing Kelly Kelly Eve and the Bella Twins every week on #Raw give me #DivasofDoom @TheBethPhoenix @NatByNature

@XDustinEFLX: I agree with Lawler. McGillicutty and Otunga (especially Otunga) are one of the most boring tag teams in years. #WWE #RAW

Share your voice with the rest of the WWE Universe on Twitter by using #RAW and check back next week for the another edition of Raw Morning After.