Refueling the Starship: John Morrison on his exciting Raw return

HAMPTON, Va. – For the last several months, R-Truth has been worried about the millions of “Little Jimmys” around the world, but it was a “Big Johnny” that would ultimately silence the vocal conspiracy theorist on Monday Night Raw: John Morrison.

Coming back to Raw after being sidelined by his former friend and tag team partner, The Guru of Greatness had retribution on his mind when WWE’s new Chief Operating Officer Triple H heralded his surprise return, much to Truth’s chagrin. With fire in his eyes – not hidden behind his signature shades on this momentous occasion – Morrison made short work of Truth before taking him for a ride on Starship Pain.
(WATCH | PHOTOS) 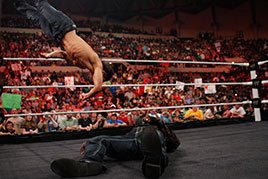 “It felt like a good start,” The Shaman of Sexy told WWE.com following this anticipated act of retribution against his unhinged nemesis. “But as far as I’m concerned, Truth and I have a lot of unfinished business.”

The rivalry between these two Raw Superstars ignited back in April, when a friendly challenge issued by Morrison cost Truth a WWE Championship opportunity at Extreme Rules. Truth erupted after realizing that The Prince of Parkour had taken his spot in a Triple Threat Steel Cage Match for the WWE Title, leaving Morrison battered and bruised as the crowd in London’s O2 Arena witnessed the brutality in horrified astonishment. (WATCH) 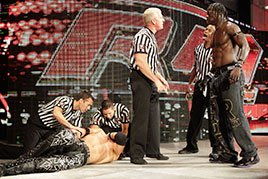 Although Morrison would go on to compete in that WWE Title Match less than two weeks later, Truth nevertheless found a way to affect the bout’s outcome by entering the confines of the cage and assaulting Morrison to cost him a near-certain victory. The following night on Raw, Truth struck again, ambushing his former ally just moments before they were scheduled to clash. Another attack in June aggravated Morrison’s previous Truth-incurred injuries, forcing JoMo to receive additional medical care and rehabilitation that further delayed his return to action. (WATCH)

“Aside from the neck surgery to repair herniated disks and drilling through some bone to relieve some pressure on the nerves in my arm, I had to do a lot of rehab to try to repair motion paths that were thrown out of whack by nerve damage,” Morrison explained of his injuries. “Nerves are a very frustrating thing because you can’t force them to get better like you can a muscle. They don’t respond to effort and physical therapy – nerves just take time. In the meantime, I’ve been trying to stay in shape while not training in ways that mess up the biomechanics of my body.”

Healed and ready for battle, Morrison re-emerged on Raw during Triple H’s “State of the WWE” address, which marked the beginning of a new era under The Game’s regime. While speaking with WWE.com, Morrison considered making peace with Truth in light of WWE’s radical shift in the status quo – but only momentarily. 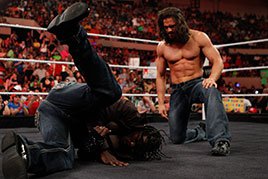 “I had some time to think,” Morrison said, reflecting on his shattered friendship with Truth, who has grown even more bitter and unpredictable in recent weeks. “I went to China, drank a lot of tea and realized that there’s no use being angry.”

After a brief pause, Morrison continued, “Okay, maybe I’m a little upset. Maybe I would like to find R-Truth, make him feel the same pain that I felt and beat him so badly in front of the ‘Little Jimmys’ that he can’t walk. Then, maybe I would like to pick him up and beat the crap out of all of his other personalities and make him cry the way The Miz does every time he loses a match.”

As WWE’s new era begins, so does John Morrison’s as Starship Pain blasts into the WWE Universe once again. To see more of JoMo in action, click here.