LAS VEGAS – While the United States of America let freedom ring in celebration of Independence Day on Monday night, the WWE Universe around the globe was still reeling from CM Punk’s controversial “declaration of independence” one week earlier. The Straight Edge Superstar’s inflammatory words and unprofessional conduct on Raw resulted in a suspension that would essentially end his WWE career three weeks before his contract expiration – and his anticipated WWE Championship clash with reigning titleholder John Cena at WWE Money in the Bank.

However, support for Punk’s reinstatement would ultimately come from an unlikely source: The Champ himself. 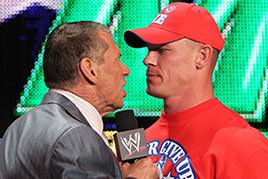 The Champ lauded The Second City Savior for speaking his mind, and criticized the strong-willed CEO – who famously went toe-to-toe with Ted Turner and won – for being thin-skinned the previous week following Punk’s rant against the company. However, it’s all about “calculated risks” with Mr. McMahon, who was quick to correct The Champ. He didn’t suspend Punk for his words; he suspended him because he doesn’t think Cena can beat him. As such, The Chairman didn’t want to risk Punk leaving WWE with its grandest prize in his possession.

Questioning what the WWE Championship stands for in light of Mr. McMahon’s refusal to lift Punk’s suspension, Cena handed the title to the WWE CEO and turned his back on the boss. Irate, Mr. McMahon reluctantly agreed to reinstate The Straight Edge Superstar, under a single condition: If CM Punk leaves Chicago with the WWE Title, The Chairman will fire Cena personally in the middle of the ring.

Alex Riley def. The Miz; Miz assaulted his former protégé (WATCH | PHOTOS)
For Alex Riley, Independence Day likely takes on a whole new meaning this year following his liberation from his overbearing former employer, The Miz. Holding multiple victories over The Awesome One since their falling out – including an impressive win at Capitol Punishment in our nation’s capital, Washington, D.C. – A-Ry added to his accolades by decisively pinning his former mentor once again.

Never quite graceful in defeat, The Miz erupted after the match, sending his former apprentice into and over the ringside barricade before throwing him into the steel steps and onto the announce table. Putting a sickening exclamation point on the attack, a frustrated Miz stunned Riley with a boot to the face, leaving his season two NXT Rookie in a heap on the floor. 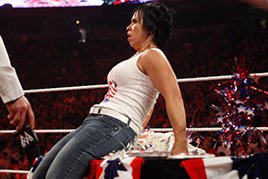 After presenting the blond braggart with a star-spangled birthday cake, Vickie urged the Las Vegas crowd to join her in screeching “Happy Birthday” to Ziggler, who proceeded to inform the WWE Universe of how lucky they are to be in the presence of “the greatest sports-entertainer in the history of WWE in his prime.”

Vickie and her business associate continued their celebration of all things Ziggler, but they hadn’t counted on Kofi Kingston crashing the party, who reminded his longtime nemesis that he will never be able to beat him in a fair fight without WWE’s resident cougar in his corner. A brawl between Ziggler and The Dreadlocked Dynamo ensued, which left Vickie falling right into Ziggler’s “birthday” cake – twice. Covered in frosting, an ashamed Vickie strode up the entrance ramp, knowing she’d gotten her just desserts. 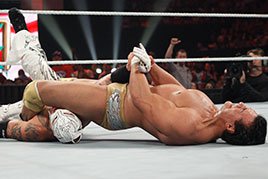 Alberto Del Rio def. Rey Mysterio and R-Truth to become the new No. 1 contender (WATCH | PHOTOS)
Alberto Del Rio believes he is destined for championship glory … but we already know that. Nevertheless, The Mexican Aristocrat had his work cut out for him in a Triple Threat Match against R-Truth and Rey Mysterio to determine the No. 1 contender to John Cena’s WWE Title.

Although all three of these ring warriors were scheduled to compete in the Raw Money in the Bank Ladder Match on July 17, a victory in this bout would allow them to bypass that harrowing, high-risk encounter.

At the end of an incredible match that pushed all three of these Superstars to their limits, The Ultimate Underdog seemed to have sealed a victory after nailing Truth with a 619 followed by a frog splash. However, as Mysterio had the conspiracy theorist pinned, the moneyed Mexican pounced, locking in the cross armbreaker on the surprised Master of the 619. As Del Rio seemed to nearly wrench Mysterio’s arm out of its socket, the masked Superstar had no choice but to tap out, earning The Mexican Aristocrat a No. 1 contendership. 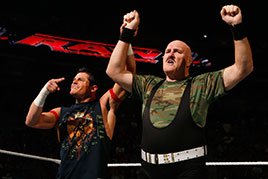 Jack Swagger def. Sgt. Slaughter, Evan Bourne retaliated (WATCH | PHOTOS)
A Fourth of July edition of Monday Night Raw just wouldn’t be complete without a visit from WWE Hall of Famer Sgt. Slaughter, who aimed to teach All-American American Jack Swagger about what it means to be an true patriot.

Unfortunately, even after taking this “maggot” to boot camp, fueled by “U.S.A.” chants echoing throughout the arena, Sarge suffered defeat after the former World Heavyweight Champion landed his signature splash. Not content with merely humbling Slaughter, Swagger trapped the veteran in his excruciating ankle lock. As Slaughter vigorously tapped the mat, it was Evan Bourne who swooped in to save the WWE Legend and send his Raw Money in the Bank Ladder Match opponent staggering back to the locker room. Then, Slaughter led “Air” Bourne and the entire WWE Universe in a proud recitation of the Pledge of Allegiance. A-ten-hut!

Otunga ultimately fell victim to Santino’s dreaded Cobra, but it was McGillicutty who sent the international oddballs packing. Speaking of oddballs, The New Nexus’ victory celebration was cut short by Long Island Iced Z himself, Zack Ryder. The self-proclaimed “Internet Champion” left Otunga & McGillicutty with a cryptic warning as only he can deliver: “Woo woo woo, you know it.” Just what are they supposed to know? 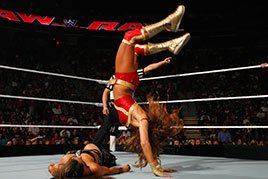 Divas Champion Kelly Kelly & Eve def. The Bella Twins (WATCH | PHOTOS)
When will Nikki & Brie learn? One week after a double-team attack on Kelly Kelly was thwarted by the Divas Champion’s friend Eve, the devious duo’s arrogance once again got the better of them, this time in tag team action against both of these gorgeous and powerful competitors. For the third straight week, Kelly Kelly demystified the Bellas’ “Twin Magic,” getting the pin following a K2 Legdrop.

WWE Champion John Cena defended CM Punk, called out WWE Chairman Mr. McMahon
(WATCH | PHOTOS)
John Cena might not have agreed with what CM Punk had to say about him one week prior on Monday Night Raw, but he’ll do whatever it takes to defend his right to say it. On the day the United States of America annually celebrates its freedoms, including the Freedom of Speech, The Champ vehemently criticized the WWE Chairman’s decision to suspend The Second City Savior and strip him of his scheduled WWE Title opportunity in two weeks at WWE Money in the Bank, emanating from Punk’s hometown of Chicago. After all, if Punk is unable to speak his mind, where does the censorship end?

Cena had it on good authority that Mr. McMahon would be in the building later in the night, and demanded that The Chairman meet him face-to-face to explain Punk’s exile. Also later that night, with Cena’s WWE Championship opponent on July 17 in question, Rey Mysterio, R-Truth and Alberto Del Rio would collide in a No. 1 Contender’s Match.