RICHMOND, Va. - "Stone Cold" Steve Austin will always be a bright, blazing Superstar in the WWE Universe. Not only did the WWE Hall of Famer kick off Raw by announcing the winner of WWE Tough Enough, he closed the show with a beer-soaked main event. Can he get a Hell Yeah?!

R-Truth & The Miz def. WWE Champion John Cena & Alex Riley by Disqualification (WATCH | PHOTOS)
Even when “Stone Cold” Steve Austin isn’t a direct participant in a match, his impact is undeniable. Acting as special guest referee during a match pitting WWE Champion John Cena & Alex Riley against R-Truth & The Miz, The Texas Rattlesnake wasn’t about to take any guff. He finished off the arrogant Miz like a six pack with a “Stone Cold” Stunner. The Champ then followed up with an Attitude Adjustment on The Awesome One.  As a result, Cena & Riley were pronounced the winners … momentarily.

Raw’s anonymous General Manager intervened, however, and overturned the special guest referee’s decision. “Stone Cold” could hardly believe when Michael Cole read the decision. Just as it appeared The Texas Rattlesnake might open up a can of whoop ass, the Raw GM tried to appease him, appointing him Special Guest General Manager for next week’s special three-hour WWE All Star Night.

“Stone Cold” seemed pleased, but that still didn’t save the weasel. The WWE Hall of Famer dragged Cole into the ring and leveled him with a Stunner. The Champ then followed up with a second Attitude Adjustment of his own, prompting he and The Texas Rattlesnake to toast a few beers and also leaving Cole flopped onto the canvas like a sack of wet laundry.

Booker T def. Jack Swagger by Count-out (WATCH| PHOTOS)
Is Jack Swagger tough enough? Not if you ask Booker T. The WWE Tough Enough trainer agreed to a match after The All-American American disrespected him in the locker room area. Booker demonstrated that he’s still got the chops to go. So much so, in fact, that Swagger begged off, leaving the ring and losing the match by intentional count-out. When he scampered up the ramp, his rival, Evan Bourne, leveled him with glee and coaxed him back in the ring, where he and Booker each nailed the towering Superstar with punishing moves. “Air” Bourne then joined Booker in the ring for dualing “Spinaroonies.” Can you dig it, Suucckkaaaa?! 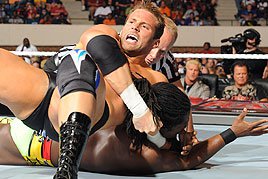 Alberto Del Rio mocked Big Show
Alberto Del Rio had better hope Big Show is a slow healer. Weeks after The Mexican Aristocrat’s assistant, Ricardo Rodriguez, drove over the leg of The World’s Largest Athlete and put him on the shelf, Del Rio had the nerve to mock his towering rival. He had Rodriguez don a bald cap and singlet and hobble to the ring on crutches as he mocked him and even threatened the real Big Show.

Rey Mysterio def. CM Punk (WATCH | PHOTOS)
Consider the score evened. After losing to CM Punk last week, Rey Mysterio requested a rematch. In a renewal of their deeply personal rivalry – that had seen Punk torment Rey’s family – The Master of the 619 wasn’t about to let The Second City Savior get two over on him. Instead, the high-flyer overcame his disappointment and refused to give up, earning an especially satisfying victory.

Booker T accepted a match against Jack Swagger
Jack Swagger's ego must getting the best of him. As Booker T talked with his fellow WWE Tough Enough trainer Trish Stratus, The All-American American confronted him and challenged him to a match later in the night. Booker could hardly believe his ears, but when he realized that yes, Swagger really did challenge him, he gladly accepted. 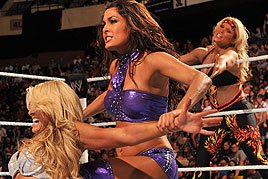 Beth Phoenix & Kelly Kelly def. Divas Champion Brie Bella & her sister Nikki (WATCH | PHOTOS)
Last week, Divas Champion Brie Bella & her sister Nikki mocked Kharma after the braided behemoth announced that she was pregnant and would be out of competition for a year. Unfortunately for The Bella Twins, however, there are plenty of Divas prepared to step into her considerable shoes. In a tag team match, Beth Phoenix & Kelly Kelly proved they’re just two such competitors when they handed the twins a definitive defeat, compliments of a Phoenix delivered Glam Slam. 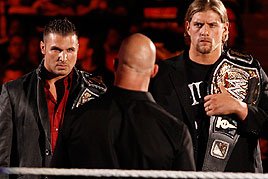 Winner of WWE Tough Enough announced; main event match arranged (WATCH: PART 1 | PART 2 | PHOTOS: PART 1 | PART 2)
Congratulations, Andy! After weeks of grueling competition on WWE’s reality series WWE Tough Enough, Andy was chosen the winner over Luke live on Raw with the show’s host, “Stone Cold” Steve Austin delivering the incredible news. However, having emerged prior to the announcement, Mr. McMahon voiced his opinion that the wrong man had earned the WWE contract. The Texas Rattlesnake let Mr. McMahon know that he didn’t appreciate being undermined before welcoming Andy to WWE with a congratulations … and a “Stone Cold” Stunner.

After the stunning announcement, a slew of Superstars emerged to air their various grievances. Tops on the list? The delusional and disturbed R-Truth, who offered a bizarre apology for his actions the week prior. The act of contrition, such as it was, guaranteed Truth a WWE Title Match at Capitol Punishment. After his apology, Truth went on to espouse his far-fetched conspiracy theory that WWE is trying to hold him back. He then "seceded" from the WWE Universe.

Not one to share the spotlight , The Miz interrupted to complain that were it not for his former lackey, Alex Riley, he would still be WWE Champion. Unfortunately for him, A-Ry popped up, too, disputing Miz’s dubious version of events. Amid the chaos, WWE Champion John Cena dropped by to set it all straight.