LONDON - All of Britain is abuzz. No, not with news of the impending, historic royal nuptials of Prince William and Kate Middleton. Rather, England’s lads and lasses are chinwagging over the latest brilliant and barmey happenings on Raw less than two weeks before Extreme Rules.

Randy Orton def. CM Punk (WATCH | PHOTOS)
Who knew The Viper could play possum so well? As tensions continue to mount between Randy Orton and CM Punk, the two met head on in the night’s explosive main event. Fierce competitors, The Viper and The Second City Savior traded blows as well as momentum throughout the bout. In the end, Orton turned the tables on his preachy opponent and capitalized for the win. Unfortunately for Orton, The New Nexus crashed the victory party.

Punk’s New Nexus disciples surrounded the ring and closed ranks around their prey. After pummeling Orton and leaving him seemingly unconscious on the canvas, The New Nexus cleared a path for Mason Ryan to deliver the final nail in the coffin. The Second City Savior waved him off, though, intent on punishing Orton himself. As he steamed toward the lifeless body, however, WWE’s Apex Predator snapped to life. He leveled Punk with a shocking RKO before slithering from the ring and leaving The New Nexus stunned and scrambling for answers. 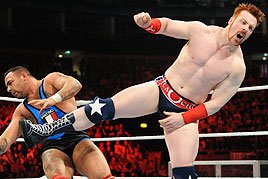 One week before the WWE Draft, Sheamus showed his dominance for all of England and the world to see by making quick work of the recently ascendant Santino.

Michael Cole got “knighted” (WATCH | PHOTOS)
Sir Michael Cole? Sounds about as plausible as “Grammy-winner R-Truth,” right? Well, the cheese-eating announcer had his Extreme Rules tag team partner, Jack Swagger, join him as a woman, who looked vaguely like the Queen of England, entered the ring and allegedly knighted him.

Eve def. Nikki Bella (WATCH | PHOTOS)
After Twin Magic cost her the Divas Championship last week, Eve appeared eager to make one of The Bellas disappear. As Nikki faced the Latina lovely, her sister and current Divas Champion, Brie Bella, looked on with great interest. This week, however, The Bellas lost their magic – and underhanded – touch. Instead, Eve toppled Nikki with ease and let it be known to Brie that she would be gunning to reclaim the butterfly title. 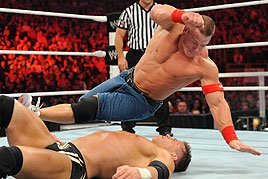 The Cenation Commander-in-Chief softened up his Extreme Rules rival as well as Riley. Sin Cara then used his acrobatic antics against Riley, who succumbed to the international wonder with a three-count.

2011 WWE Draft to take place next week
It's one of the most highly-anticipated nights of the year for the WWE Universe. And one of the most unsettling for Superstars. Next week, Monday Night Raw hosts the 2011 WWE Draft. Who will leave Monday nights and who will join the Raw roster? Tune in to find out! 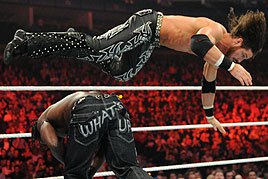 John Morrison def. R-Truth to earn a WWE Title opportunity (WATCH | PHOTOS)
Warning: Smoking may cause loss of WWE Title opportunity. After securing a spot last week in the Triple Threat Steel Cage Match at Extreme Rules along with WWE Champion The Miz and John Cena, R-Truth came out in London’s O2 Arena to celebrate.

He was greeted by John Morrison, however, who unveiled footage from last week’s match of the rapping Superstar chugging water, sucking wind and appearing out of shape. The Shaman of Sexy derided his former tag team partner for his smoking habit and challenged him for his position in the title match.

Truth accepted – a decision he would regret when Morrison prevailed and the rapping Superstar watched his title hopes go up in smoke. Afterward, a bitter Truth mercilessly attacked his opponent and, at one point, even grabbed cigarettes from an audience member and blew smoke in Morrison’s face.

Solo Sikoa left a trail of destruction to close out a wild NXT 2.0