Following weeks of verbal sparring and vitriol via satellite, WrestleMania XXVII Host Dwayne “The Rock” Johnson will share the ring with John Cena for the first time ever on Raw tonight in Chicago’s Allstate Arena. Just six days before The Cenation Commander-in-Chief challenges The Miz for the WWE Championship on The Grandest Stage of Them All, Raw promises to electrify in an appropriate setting.

Although this meeting of iconic ring warriors is historic in its own right, the Windy City has played host to monumental moments in both men’s careers. It was at the Allstate Arena – then called the Rosemont Horizon – where The Rock made his first Show of Shows appearance at WrestleMania 13, successfully defending the Intercontinental Championship against The Sultan. (WATCH) 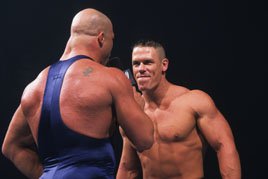 In that same building, five years later, Cena made his dynamic WWE debut on the June 27, 2002, edition of SmackDown, brazenly responding to an open challenge issued by Kurt Angle. Although Cena was ultimately pinned by the gold medalist that evening, his display of courage and “ruthless aggression” introduced the WWE Universe to Cena’s signature virtues of hustle, loyalty and respect – all of which propelled Cena to incredible heights in WWE. (WATCH)

Now, both Cena and The Brahma Bull will make history in Chicago once again in what is sure to be an electrifying pre-WrestleMania encounter. However, these rivals would be wise to keep an eye open for The Miz, as the most “must-see” WWE Champion in history will no doubt be looking to make his mark on the Windy City himself … and what better way to do that than by dismantling two of WWE’s most celebrated Superstars in a single night?

Watch as The Rock “brings it” to Raw to confront John Cena tonight, live at 9/8 CT on USA Network.