BUFFALO, N.Y. – Here are my takes on the big stories from Sunday's Night of Champions that the WWE Universe is talking about on Facebook, Twitter and WWE.com.

Eck’s Factor: It was a wise decision by the powers that be to have this match go on last. No disrespect to the participants in the WWE and World Heavyweight Title Matches, but the deeply personal issue between Triple H and Punk was the most compelling attraction on the show, and Triple H and Punk delivered in a major way. I can understand why some fans may feel that the finish was overbooked, but I thought all the outside interference – by The Miz, R-Truth, WWE Executive Vice President of Talent Relations John Laurinaitis and Kevin Nash (hey, wasn’t he fired?) – added to the drama of the match. 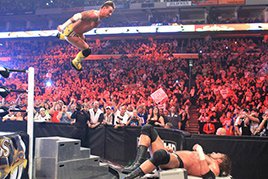 Triple H – who was wrestling in just his second match in the past 16 months and his first since his epic encounter with The Undertaker at WrestleMania XXVII – showed no sign of ring rust. And although Punk may have come out on the losing end, he solidified his standing as one of the top Superstars in the company by pushing the legendary Game to the limit. I’m really looking forward to WWE Raw SuperShow tonight and seeing what the fallout will be for all the parties who were involved in the match.

Talking point: Why did The Miz and R-Truth try to cost Triple H his match against CM Punk, but then later in the match R-Truth broke up Punk’s pin attempt?

Eck’s Factor: That’s a great question, and it’s one I asked as soon as it happened. My guess is that R-Truth just got caught up in the moment and lost track of which Superstar he and The Miz were trying to screw over. Either that, or the voices in R-Truth’s head conspired and told him to do it. Perhaps the bigger question is: After assaulting referees and interfering in the main event, what consequences will The Miz and R-Truth face tonight on Raw SuperShow? 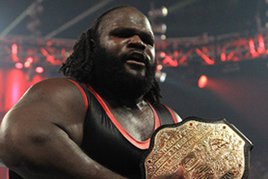 Eck’s Factor: If I had to pick an MVP for Night of Champions, it would be Henry. The World’s Stongest Man has made the most of his recent opportunity to be in the spotlight – both in the ring and on the microphone – and it was great to see him be rewarded with the first World Title of his 15-year career. It was also refreshing to see a heel score such a decisive victory over a Superstar of Orton’s status. Henry is definitely not a typical conniving, smarmy heel; he’s a monster, and a darn convincing one. The Henry-Orton match reminded me of when the massive Big Van Vader shocked the wrestling world by gaining a clean victory over Sting for the WCW Title nearly 20 years ago. Not only did I enjoy Henry’s performance in the ring at Night of Champions, but I also thought he did a terrific job when addressing the crowd after the match. I especially liked it when he told the fans that were cheering him that this was his moment, and he neither wanted nor appreciated their attempt to share in it.

Eck’s Factor: I’m sure that Cenation is ecstatic about Cena capturing his 10th WWE Title (which extended his record for most WWE Title reigns) and his 12th World Title overall, but I would like to have seen Del Rio hold the title for longer than five weeks. Despite the loss, however, I think Del Rio gained some more credibility with the WWE Universe by delivering a top-notch performance in a big match against Cena. I would be shocked if Del Rio doesn’t have multiple WWE and/or World Heavyweight Title reigns in his future. I dare say it’s his destiny. 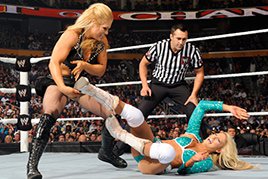 Talking point: Beth Phoenix fails to capture the Divas Championship from Kelly Kelly in her hometown

Eck’s Factor: This was clearly the biggest upset of the night. The fans in Buffalo were not happy about the result, but then again, they should be used to their local favorites losing the big one by now. However, to steal a line from Christian, if Phoenix gets one more match for the title, I think the third time will be the charm. As for Kelly Kelly, she has really stepped up her game as of late, and she deserves a lot of credit for putting on a strong performance in a hostile environment.

Eck’s Factor: The live crowd didn’t react to the line, which Sheamus delivered during an in-ring verbal confrontation with Christian, and fans on a live chat didn’t care for it either. I actually thought it was hilarious. Then again, I always thought "The Abraham Washington Show" was funny, too.

WHO IS KEVIN ECK?

For those who are unfamiliar with me, I come to WWE from The Baltimore Sun, where I was an assistant sports editor and the author of a pro wrestling blog titled Ring Posts. In between two stints with The Sun, I worked as the editor of WCW Magazine from 2000 to 2001.

Raw results, August 2, 2021: Nikki A.S.H. proves herself in No Holds Barred win against The Queen