If there are storybook endings in WWE, then CM Punk’s is one of Grimm’s Fairy Tales.

This Sunday at Money in the Bank, the controversy-culling Straight Edge Superstar’s final night in WWE will fulfill a cyclical career that began under parallel circumstances five years ago – ironically, in the same arena with his most despised adversary, John Cena.

A relatively unrecognized performer in the WWE locker room, proud Chicagoan CM Punk made his very first WWE appearance in his hometown at WrestleMania 22 toting a tommy gun and a smug smirk beneath the brim of a tilted hat. Clasping onto the side door of a 1940s streetcar, the zoot-suited soon-to-be-Superstar rode into the Allstate Arena among a small mob of “gangsters” heralding the entrance of reigning WWE Champion Cena. (PHOTOS)

Live on pay-per-view, The Champ defended the same WWE Title he currently wears against Triple H. Clashing with multiple-time World Champion The Game, Cena was the distinct underdog – a role which, as Punk boldly stated this past Monday, the out-of-touch Champ can no longer claim.

On April 2, 2006, Cena was victorious and celebrated in front of a sold-out crowd in Chicago – Punk’s crowd (if you were to ask him) – while The Second City Savior passed through the backstage halls of the Allstate Arena, unnoticed and in search of an exit. Mere months before his debut on ECW, the tattooed warrior got close to the grand stage, perhaps fully confident that he’d one day take that stage for his own … quite possibly against Cena. 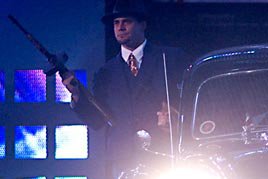 Years after his Al Capone-inspired first appearance, CM Punk returns to this meaningful setting to not just usurp John Cena but also disgrace WWE by seizing its richest prize and purest symbol of a decades-long squared circle legacy.

The world will undoubtedly be watching the highly anticipated showdown with colossal implications on all those involved – Cena, CM Punk, Mr. McMahon – as well as the entire WWE Universe. Will Punk make his Second City paradise the grounds for his ultimate moment? Can The Champ retain the WWE Title and the integrity of its lineage by keeping it in WWE? Tune in live to Money in the Bank this Sunday at 8/5 PT, only on pay-per-view.