NEW ORLEANS - Here are my takes on the big stories from Sunday's Hell in a Cell pay-per-view that the WWE Universe is talking about on Facebook, Twitter and WWE.com.

Eck’s Factor: Two weeks after being fired by WWE COO Triple H, The Miz and R-Truth crashed the pay-per-view and went postal on a number of their former co-workers, including WWE Superstars, referees and crew members. I think a lot of us saw something like this coming, but it still was impactful. After the Hell in a Cell Triple Threat Match for the WWE Title concluded, Miz and Truth – who earlier in the night had attacked Air Boom in the locker room – emerged from under the ring and began beating down everyone in sight, including match participants John Cena, CM Punk and Alberto Del Rio. For some reason, despite orders from Triple H and Executive Vice President of Talent Relations John Laurinaitis, the cell wasn’t raised while this was going on, and a WWE crew member had to use bolt cutters to unlock the door. At that point, police officers entered the ring and placed Miz and Truth in handcuffs. As the two former WWE Superstars were being led to the back, an enraged Triple H assaulted them with a flurry of punches. It all made for a wild, exciting ending to the show. I’m looking forward to Raw SuperShow tonight to see what the fallout from the incident will be. The chaos certainly strengthens the claim that Triple H has lost control of WWE. As for Miz and Truth, hopefully they will be reinstated sooner than later. Love them or hate them, the WWE is more entertaining when they’re around. 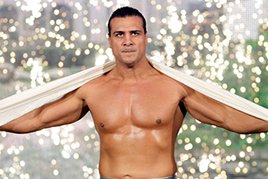 Eck’s Factor: Del Rio, defending WWE Champion John Cena and CM Punk put on a great match, which ended with Del Rio pinning Punk after smashing him in the head with a pipe. At that point, Cena had been reduced to being a helpless spectator, as he was locked out of the cell by Del Rio after being distracted by Ricardo Rodriguez. I really like the more serious, aggressive Del Rio, and I was glad to see him get the title back after his inaugural, five-week reign ended at Night of Champions two weeks ago. No disrespect intended to Cena, but I really don’t care to see the championship back around his waist anytime soon. As Punk said to him a few months back, Cena has become the New York Yankees of WWE.

Eck’s Factor: It seemed as if everything was setting up perfectly for Orton to regain the championship. After withstanding Henry’s onslaught, he managed to hit the RKO. Henry, however, kicked out at the last second, which shocked the crowd. Orton then set up for a punt to the head, but Henry got to his feet and delivered The World’s Strongest Slam for the victory. That’s two clean wins in a row for Henry over The Viper. Who would have ever believed that to be possible just a few months ago? Although Orton was unsuccessful in regaining the title, he did get his heat back after the match. After escaping from an induction into Henry’s Hall of Pain, Orton nailed the champion with repeated chair shots. In the end, both guys came out of this match looking strong. Assuming Orton isn’t getting another title shot against Henry any time soon, it will be interesting to see what’s next for each of them.

Eck’s Factor: Rhodes didn’t explain himself very well, but I think him placing the current Intercontinental Title in a paper bag and unveiling the classic version was his way of saying that he was the man to restore the championship to its past glory, when it was held by the likes of Ricky Steamboat, Bret Hart, Randy Savage and "Stone Cold" Steve Austin (not to mention Shawn Michaels, The Rock and Triple H). Time will tell about that, but Rhodes is off to a good start. Despite having to compete in his street clothes in an impromptu match, Rhodes defeated challenger John Morrison. That makes three successful title defenses for Rhodes in a span of seven days – and he did it all with nine staples in his head. 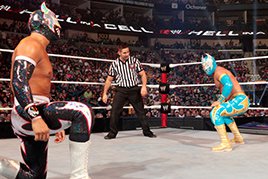 Talking point: Perhaps two Sin Caras are not better than one

Eck’s Factor: The live crowd in New Orleans didn’t seem to know what to make of the confrontation between the two masked men with the same name, and the match came off flat. It didn’t help that the action was a bit sloppy at times.

Talking point: The third time is the charm for Beth Phoenix

Eck’s Factor: The surprise isn’t that Phoenix defeated Kelly Kelly for the Divas Championship; it’s that she needed three shots at the title to do it. I wonder if Kelly Kelly will get multiple title opportunities against The Glamazon if she fails to regain the championship in her first rematch. I certainly wouldn’t mind if she did. I’ve enjoyed the rivalry between these two.