Is WWE Out of Control? 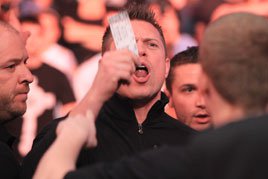 Perhaps it should have been a warning sign, seeing Mike "The Miz" Mizanin and Ron "R-Truth" Killings sitting with the New Orleans Arena audience at the start of WWE Hell in a Cell. WWE EVP of Talent Relations John Laurinaitis approached the duo – fired only two weeks ago by WWE COO Triple H – and demanded that they leave. Instead, they produced tickets for the pay-per-view and insisted that they had a right to be in attendance. Laurinaitis, along with WWE security, quickly whisked them from their seats, seemingly out of the building.

Later in the night, though, Laurinaitis summoned Triple H to help deal with a raging Miz and Truth in the locker room. After some heated pushing and shoving, WWE security was able to remove the duo, revealing downed WWE Tag Team Champions Kofi Kingston and Evan Bourne. The Game was furious that Laurinaitis had gone against his orders to use law enforcement officials, instead of WWE security, to properly remove Miz and Truth from the building earlier, thus allowing them to even get near the WWE locker room area. 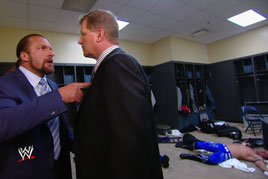 By the close of the night – moments after Alberto Del Rio regained the WWE Championship in a Triple Threat Match (RESULTS | PHOTOS) – the Cell mysteriously rose, enabling Miz and Truth to rush the ring and enter Satan’s Structure. The Cell then unexpectedly lowered to the ground once more, trapping Del Rio, John Cena, CM Punk and several WWE personnel inside with the former WWE employees.

Miz and Truth viciously assaulted all three main event competitors, as well as the helpless cameramen and 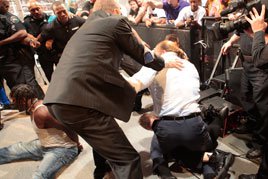 referees, at which point, the COO, Laurinaitis, and nearly the entire WWE locker room charged the Cell, looking for a way to stop the brutal attack. After several long minutes spent waiting for Triple H to actually take control of the situation, a WWE official finally used a pair of bolt cutters to slice through the Cell's lock, allowing R-Truth and Miz to be subdued by law enforcement officials.

And then it happened.

As Truth and Miz were lead up the ramp by police officers, the COO – perhaps frustrated at his inability to take charge – snapped, and physically assaulted the two handcuffed former Superstars until he, too, was physically restrained and pulled from the melee.

While the duo was escorted out of the building by police, R-Truth insisted that the WWE Universe had not seen the last of them. (EXCLUSIVE VIDEO) 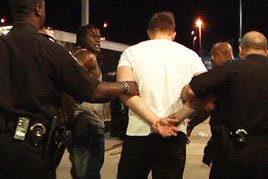 As a result of the anarchy that took place Sunday night, many questions have arisen – the first being, who controlled the unauthorized lowering of the Cell after the Triple Threat Match was over? Laurinaitis confronted the technician reportedly in charge of the Cell’s elevation, but he insisted that he wasn't to blame.

The next question? What took The Game so long to react? And, why wasn't he in control of the Cell from the beginning? It's possible that The Game's personal vendettas have completely submerged and overwhelmed his sense of professional responsibility.

And finally, perhaps the most important question: what was the COO thinking when he attacked two helpless former employees? WWE’s Chief Operating Officer had every right to be furious with The Miz and R-Truth, and he was right to rush the Cell while trying to defend the company’s Superstars and crew members. But, once the handcuffs were put on Miz and Truth, the problem was neutralized. And, rather than regain control of the situation, the COO completely lost it by forfeiting his composure and adding to the ensuing anarchy.

After a night like WWE Hell in a Cell, tonight’s Raw SuperShow is sure to be a pivotal juncture in both Triple H’s ongoing journey as COO and the very future of WWE, with just about everyone in the world – including WWE.com – demanding answers. What will unfold? Tune in tonight at 9/8 CT on USA Network.

POWER STRUGGLE
What do you think is going on in WWE? Sound off now on WWE's Facebook and Twitter pages.