"Your true passion should feel like breathing; it’s that natural." – Oprah Winfrey

As the tears finally stopped flowing from Michelle McCool’s eyes in the locker room, the former schoolteacher-turned-Diva became reflective. After all, she had grown up having a love affair with WWE, something she shared with her dad and "pap pap," her grandfather. Being a Diva was her dream, and although the road may have started in a seventh-grade classroom where she taught middle schoolers science, the road would ultimately end where she always told her pap pap and dad she’d be someday: in the squared circle.

As McCool’s body hit the canvas in a tough Loser Leaves WWE Match at Extreme Rules with her former best friend Layla, and then a powerful slam to the ring  by a debuting Kharma, all those dreams came crashing down – her time in WWE was up. The tears began to flow – a combination of the physical pain she had been enduring for two months and the emotional strain of a dream coming to an abrupt halt.

“My foot has been injured for two months now, broken toe, torn joint capsules, torn MCL. I took a good beating by Layla and Kharma, too. I know I’ll be feeling it tonight, tomorrow and probably the next day,” McCool exclusively told WWE.com. “But I’ll wear it with pride.” 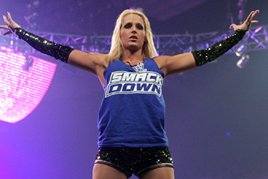 McCool’s career began in 2004, thanks to the Diva Search. During her tenure as a teacher, she saw an advertisement on Raw for the competition. Although teaching kids was her love, working her way into WWE and winning the championship was something she was passionate about, and nothing was going to stand in her way.

“I’ve been doing this for six years now. Love me or hate me, I hope the WWE Universe can respect that night in and night out, I’ve given it my all,” McCool said as the tears again began to flow. “This is definitely emotional, and I’m sure it’ll be like that for awhile.”

Pausing for a moment to collect herself, McCool did have one last message for the WWE Universe.

“Thank you for the love and the hate. Thank you for being you and for watching. Hopefully I’ll see you around – not in the ring – but maybe someday.”

And as she packed up her bag for the last time in the Divas locker room, it hit her. She wouldn’t be doing the familiar tonight, heading to another city. She’d be heading someplace much more unfamiliar – home.