October is WWE's most innovative month

There are many things to love and hate about October. Summer is officially over, the foliage beautifully changes colors, a rush of sugar and spooky costumes close out the month, and cold winter nights await. In WWE, many of the most innovative events and matches have been born under the tenth month of the calendar year. Some concepts are genius, while others are downright frightening. WWE.com takes a look at five of the most innovative moments to come in the month of October.

October 20, 1996: The Undertaker and Mankind battle in the first-ever Buried Alive Match

October not only brings the fall, but also ghoulish tales and haunted hayrides in anticipation of Halloween. Some fear the dead rising from the grave, but in WWE, October marked the first time a Superstar would be buried alive. On Oct. 20, 1996, at the aptly-titled In Your House: Buried Alive, Mankind battled The Undertaker in a gruesome contest which, in order to win, one Superstar must be put six feet under while still breathing! With an assist from The Executioner, the grotesque Mankind was able to bury The Phenom. However, this also marked a rebirth of The Deadman, as he returned a month later at Survivor Series and bore an even darker persona.

October 5, 1997: The first-ever Hell in a Cell Match and the explosive debut of Kane

The timing of WWE’s Hell in a Cell pay-per-view extravaganza coincides with the first-ever contest inside Satan’s Structure. On Oct. 5, 1997, then-WWE Champion Shawn Michaels battled The Undertaker in the first-ever Hell in a Cell Match at In Your House: Badd Blood. From the very beginning, The Devil’s Playground proved to be one of the most punishing incarnations of a steel cage match in WWE history. That same night, Kane made his WWE debut. The Big Red Monster ripped off the cell door to attack The Deadman.

Throughout WWE history, there have been a number of Superstars from the United Kingdom, the home of a very loyal portion of the WWE Universe. On Oct. 2, 1999, WWE demonstration its admiration for neighbors across the pond with the first-ever U.K.-exclusive pay-per-view event, WWE Rebellion. Held at the National Indoor Arena in Birmingham, England, the main event saw WWE Champion Triple H battle The Rock in a Steel Cage Match. WWE Rebellion only lasted four years, but the pay-per-view paved the way for future events held outside of the U.S. and Canada, including the first-ever Raw from Mexico City later this month on Oct. 17, 2011. 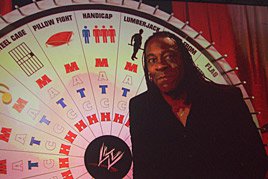 Unpredictability is part of what makes WWE a worldwide phenomenon. When you watch Raw SuperShow, SmackDown or a pay-per-view event, anything can happen. On Oct. 7, 2002, then-Raw General Manager Eric Bischoff introduced an innovative way of ensuring WWE’s famous unpredictability in the form of Raw Roulette. Superstars would spin a wheel featuring a number of different stipulations to determine their upcoming matches on Raw. In fact, the very first contest determined by spinning the wheel pitted Booker T against Big Show in a Steel Cage Match. To this day, Raw Roulette brings an incomparable variable to Monday Nights whenever it is instituted. (2011 RAW ROULETTE PHOTOS)

Without the WWE Universe, WWE would not be what it is today. As technology has evolved over time, WWE has advanced and changed as well. On Oct. 19, 2004, WWE management decided to put the power in the WWE Universe’s hands with an extraordinary concept known as Taboo Tuesday. Through WWE.com, the WWE Universe voted to determine the event’s match stipulations. Eventually, Taboo Tuesday became Cyber Sunday. Although Taboo Tuesday/Cyber Sunday came to an end in 2008, the concept has remained, most recently with WWE Raw: Power to the People in June 2011.