“A teacher affects eternity; he can never tell where his influence stops.”
Henry Adams

Maybe it was your ninth grade English teacher who taught you to persevere. Or it was a college professor who encouraged you to do well outside of the classroom. All of the WWE Universe, young and old, can remember a teacher who has made an impact. The Superstars and Divas of WWE are no different. Scroll below to find out some of their favorite teachers, and the influence those educators had on their lives.

John Cena: Herm Deihl, seventh grade history teacher. He loved America, loved history and got me into history. At the same time, he was cool on a 13-year-old level. He was 65 years old, but just was himself and didn't try too hard and it sunk in, and made me a fanatic about history.

Eve: Mr. Gilberto, my fifth grade teacher. He was actually my math teacher, and that's when I discovered that math was not only my favorite subject, but I had alot of potential in that field. He was the first one to really push me - from then on I was focused and even skipped a grade in math. He was always positive and light-hearted. 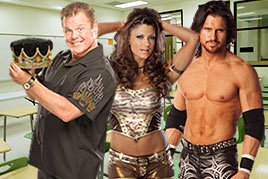 Brie Bella: My favorite teacher was my junior year English teacher in high school. Not only was he cute, wearing his hair back in a ponytail, he had so much passion. He would be these characters and raise his voice or have different facial expressions. He made learning really fun.

Evan Bourne: My high school Spanish teacher - Senora Kaiser. I am not a typical learner - I learn best by doing things. She always took time with me to help me, and now I have Spanish ingrained in the back of my head. Now, when we tour, I have a little bit of an extra step ahead of the other Superstars because I can speak some Spanish.

Kelly Kelly: Ms. Harris. She did our TV production class. Every morning I was the anchorwoman for our news so she wrote the show and really helped us out. She was very hands-on. She was really helpful to me because she knew it was something I was very interested in and wanted to go to college for. She went above and beyond.

The Miz: My high school spanish teacher - Senora Richeld. My name in her class was Paco. She was trying to teach Spanish, and I would get kicked out every day. But I got straight A's in the class and she loved me. Now, when we go to Mexico, I can get on the mic in the middle of the ring and speak Spanish and everyone knows what I'm saying. So thank you on behalf of everyone in Mexico, Senora, because they can understand what I'm saying!

Jerry "The King" Lawler: My favorite teacher may have actually saved my life. Her name was Helen Hall in Memphis, and she was my high school art teacher. She was one of the greatest artists I had ever known. She was a motivational teacher. When I graduated, the Vietnam War was right at its height, and guys were getting drafted right out of high school. She had put together a portfolio of my work and sent it off to the University of Memphis where I received a full commercial art scholarship.

John Morrison: Mr. Howard, eighth grade science. Sometimes it's not about what they taught, but how they taught it. He would always start class with a long story about monsters or himself back in the day - and class was right after lunch. It was a good way to start, because that's usually nap time for me.