Sure, the Emmys were Sunday and there will always be upsets. But if you want to know the real Emmy winners, look no further than WWE.com’s own take on the golden statue.

Lead actress in a comedy: A.J. for The Hornswoggle Affair

In this coming-of-age film, a perky, video-game loving geek hailing from the wrong side of the tracks of Union City, N.J., falls in love with a tiny lad from greener pastures. The adventures and miscommunications that ensue lead to a comedy of epic proportions.

Lead actor in a comedy: Christian for Fear and Moaning in ... Everywhere

The former World Heavyweight Champion whines and brings aboard lawyers, all for another chance at championship glory. With Mark Henry, Sheamus and Randy Orton all in his way, he'll try anything. Featuring SmackDown GM Theodore Long and Edge. (WATCH) 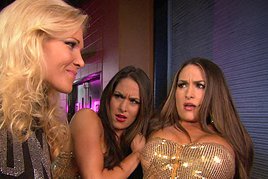 CM Punk sure has a way with words, and this three-part series chronicles the Chicago-made man's travels - on bike, of course- throughout the WWE Universe, dropping bombs and campaigning for ice cream. (Order Punk's new shirt at WWEShop)

Lead actress in a miniseries: Beth Phoenix for Pin-up Strong: A Diva's Tale

In this made-for-TV movie, a young girl from Buffalo, N.Y., plays the ivories to the tune of Mozart, while moonlighting as one of the fiercest female in-ring competitors the world has ever seen. Think Flashdance, but with less dance, more flash. And more beatdowns.

Lead actress in a drama: Nikki Bella for That Article

Yes, we know. The Bella Twins caused quite a stir for their performance in That Article, a documentary on the Divas Division in WWE. With epic Twitter monologues by both Nikki and Brie, we're not sure how they couldn't receive an award.

Lead actor in a drama: Mark Henry for Hall of Pain

Crushing skulls. Taking names. The World's Strongest Man works 15 years, dealing with injuries and tireless travelling, all to reach his dream of being a World Champion. (PHOTOS | HALL OF PAIN)

Supporting actress in a drama: Brie Bella for That Article

Supporting actor in a drama: John Laurinaitis in Phone Booth

Supporting actress in a comedy: Kelly Kelly for As the Butterfly Title Turns …

Can't we all just get along? Kelly Kelly has worked five years improving her in-ring skills. In As the Butterfly Title Turns ... Kelly Kelly tries to deal with all the haters while being one of the most popular female athletes in the world. 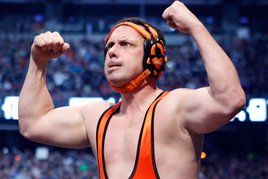 Supporting actor in a comedy: Michael Cole for Salute My Orange Spandex

Perhaps WWE's most loathed announcer, Michael Cole is relieved of his duties behind the announce table and forced to take a job at a sports-entertainment themed restaurant, where he can only wear his orange singlet. Yikes! (PHOTOS)