The untold history of the Internet Title

On July 28, 2011, the game changed for Zack Ryder when the “woo-wooing” warrior introduced the radiant, broski-embellished Internet Championship to the WWE Universe on “Z! True Long Island Story.”

But the elaborate Internet Title legacy didn’t start on that humid, late-July day. According to Ryder, who supplied WWE.com – exclusively – with the complete backstory on his finest achievement.

WWE.COM: Tell us the story of how the Internet Championship was won. Rumor has it there was some big tournament in either Massapequa or East Hampton, Long Island, that you won.

RYDER: The 64-man tournament was actually held in Merrick, N.Y. That’s where I grew up. A lot of people wanted to be the first-ever Internet Champion, but I used all my tools – Broski Boots, Zack Attacks and Rough Ryders – to make it all the way to the finals and win it. There were guys like Spiral, Sky, G-Money and Gironimo, Justin Sane – some of the toughest competitors to ever step foot in the ring. My broski The Big O lost really quick due to injury. He won in the first round, tweaked his knee and couldn’t compete in the next round. Desperado was supposed to face Big O and got a bye, but I ended up beating him. (Editor’s note: Named tournament competitors could not be reached for comment.)

WWE.COM: This sounds similar to the way Pat Patterson became the first-ever Intercontinental Champion, winning a legendary tournament in Rio De Janeiro (WATCH). Do you see a parallel between your careers?

RYDER: Pat Patterson and I are both trendsetters, for sure, and one day we’ll be in the Hall of Fame together. But this is one of – if not the – most prestigious titles in the history of WWE. The only difference between me and the first Intercontinental Champion is that I’m never going to lose this title. Look at the title history in 50 years, the only Internet Champion will be Zack Ryder. 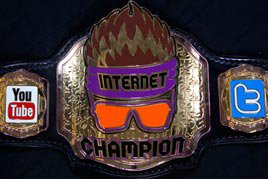 WWE.COM: The Internet Title is clearly custom-made. What was the creation process like?

RYDER: I pretty much knew walking into the tournament that day that I’d walk out the champion. I was confident I was going to win so I designed the whole thing – the Facebook, the Twitter and YouTube logos all over it. Once the maker and I agreed on the final design, it took two or three weeks to perfect.

WWE.COM: Who made the title itself? Please say it was Betteridge Jewelers in Greenwich (makers of Ted DiBiase’s Million Dollar Title).

RYDER: It was Wildcat Championship Belts who created it. They made the United States Title for WWE. It’s almost like when “Stone Cold” had the Smoking Skull Championship or when John Cena took the WWE Championship and created the title that spun around. But this title is for the Zack Pack, it’s for the Broskis. Like The Rock calls himself The People’s Champion, I’m The Broskis’ Champion. That’s what went into designing the championship.

WWE.COM: Starting with the face that’s front and center on the championship, what do the symbols on the Internet Title mean to you?

RYDER: It’s like an iconic logo. Superman had the “S” and I have the broski logo. This title is incredibly detailed. The main plate has the broski logo but in the background, there are all little “ZR” logos engraved. I had something similar to this on my tights. The detail is phenomenal. It’s no joke; this is no toy. This is the real deal.

WWE.COM: How do you keep the title clean? It must smudge a lot with all the remnant tanning lotion on your hands.

RYDER: My best friend, Chiappetta, cleans the apartment when I’m gone and when I come home, I leave out the title and he shines it up real nice with some Windex. Maybe some leather polish for the strap. (INTERNET TITLE PHOTOS)

WWE.COM: What is it about purple and orange, which are key colors in your title?

RYDER: Purple is my favorite color. It is the color of my phone case, headphones, camera – basically everything. Purple’s been in almost all of my outfits since I started competing. Orange is a good complement for it and if it’s going to be my championship, it may as well have my colors on it.

WWE.COM: There’s no confusion with it being a Phoenix Suns championship?

RYDER: I don’t think so. Ever since Charles Barkley left, nobody cares about them. 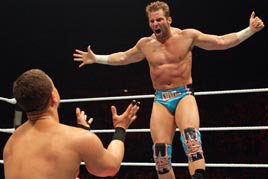 WWE.COM: The WWE Universe has questioned if you're a fighting champion. What gives with the limited defenses? The sole challenger thus far was Primo that one time in Australia. "Are you serious, bro?"

RYDER: That actually was a non-title match [at the Melbourne live event]. I just brought out the championship, plus, that was just the fake toy championship that I made. That was bogus, that was a joke. The real deal is this title, which has the prestige and honor, and I don’t have to defend it. Maybe I’ll bring it out on WWE television, make some replicas for the little broskis, but I will not defend it.

WWE.COM: Why should you be the only holder of the Internet Championship in this day and age?

RYDER: There’s nobody in WWE that has embraced social media like myself. I might not have as many Twitter followers as The Rock or John Cena but according to [social media] “Klout” and influence on social media, I’m in the top five of WWE. I was someone who wasn’t doing anything on TV but through Twitter, Facebook and YouTube, I created this buzz and this following that no one else has.

WWE.COM: Why is it, exactly, that you have such a strong connection with the WWE Universe on the web?

RYDER: I think I have a connection with the WWE Universe because I am a fan at heart. I know what WWE fans want because I am still one, myself. This is the only thing I ever wanted in my entire life. It wasn’t like ‘let me try this WWE thing.’ I set up my life for this and I think the WWE Universe can sense that. They can also feel that I’m just a kid who wants to live my dream.