The return of The nWo?

Fifteen years ago, Kevin Nash rocked the world by assembling one of the most influential factions in sports entertainment history—the New World Order. More than a decade later, is WWE on the brink of a new incarnation of the black and white?

The New World Order’s beginnings were rooted in confusion and conspiracy involving Kevin Nash. The current state of WWE is no different. The mystery of who sent Nash the text message at SummerSlam, directing him to take out the WWE Champion after the main event, has created paranoia amongst the WWE Universe and WWE Superstars. The atmosphere of deception, and the inconsistent stories being told by Nash, Triple H and Mr. John Laurinaitis, have led to widespread speculation that something larger is brewing. When the nWo first formed, that same sense of distrust allowed its rise to power. (HISTORY OF THE NWO | CLASSIC PHOTOS) 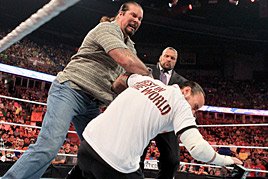 It’s no secret that Nash and Triple H are close friends; both individuals have acknowledged their tight knit locker room group known as “The Kliq,” also including Shawn Michaels, Sean Waltman (X-Pac) and Scott Hall. When The Outsiders left WWE in 1996, separating The Kliq, Hall and Nash would eventually form The New World Order in WCW, while Shawn Michaels and Triple H formed D-Generation X in WWE. There was even a period of brief crossover between the two supergroups – Waltman was a member of both during their heydays and, during the nWo’s WWE resurgence in 2002, Michaels joined Kevin Nash, and the two attempted to recruit Triple H. Is it possible that The Game and Nash are now bringing The Kliq and the nWo full circle?

When the original nWo formed in WCW, it started with three Superstars before expanding its ranks and grew exponentially in numbers. If the nWo reformed today, who would populate its ranks? There are a number of WWE Superstars who would fit in perfectly with the group’s agenda.

Click here to see who could fill the ranks of a modern-day nWo.