On Monday, WWE Chief Operating Officer Triple H fired his friend of more than 20 years, Kevin Nash, just one week after WWE Executive Vice President of Talent Relations John Laurinaitis signed Nash to a WWE contract. In most companies, a tenure that brief ending in a public firing would be unheard of. However, WWE is nothing like most companies.

People get fired from their jobs every day. However, in WWE, getting terminated is much more different - unlike all other companies, employees in poor standing are often fired in front of millions of people watching worldwide.

Triple H’s father-in-law, Mr. McMahon, made the phrase “You’re fired!” a television staple long before anyone thought of finding apprentices for Donald Trump. The former Chairman’s firings have grown more outrageous over the years and created bigger crowds around office water coolers than a conference room salt lick … and for good reason.

After altering the history of sports-entertainment and buying WCW, the company that almost put WWE out of business, Mr. McMahon outdid himself and fired Jeff Jarrett on live TV as payback for Jarrett quitting WWE and airing his grievances on WCW Monday Nitro.

Judges Wapner, Judy, Joe Brown and all the rest of the black-robed referees had nothing on Judge McMahon, who doled out cruel, unusual and unsanitary punishment to the Raw General Manager and former WCW President by dumping him into a garbage truck following a trial.

Imagine being seconds away from a humiliating firing by your boss when you are consumed by blinding rage then strike your boss with the speed and accuracy of a viper. This was reality for Randy Orton, who slapped WWE’s CEO senseless, kicked him in the head and sent him to the emergency room in an ambulance – one McMahon termination gone awry. 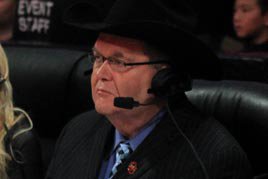 Not his first BBQ

Finally, WWE Hall of Famer Jim Ross has been terminated so many times as Raw’s lead announcer that we don’t have time to detail all the firings here. J.R. has been fired by Mr. McMahon almost as many times as George Steinbrenner axed Billy Martin as manager of the New York Yankees. However, as those of you who tuned into WWE Raw SuperShow on Monday know, being the best ever at what you do means your employer will always have a place for you, and that is sweeter than J.R.’s Main Event Mustard.

If you were in charge of WWE, which WWE Superstar(s), Diva(s) and/or Announcer(s) would you fire and how would you do it? Please share your answers on Facebook and Twitter.