Internet Title: Is it time?

Within less than a decade, the world has embraced the digital age in ways never expected, especially following the births of Facebook, YouTube and Twitter. The squared circle is no exception to the increasing trends of hashtags and “Likes,” and perhaps that’s why many WWE Universe members believe that the Internet Title – introduced and carried by Zack Ryder – may be the ideal symbol of modern-day sports-entertainment.

“Two of the four WWE programs in the U.S. are only on the internet,” explained Ryder, citing WWE.com’s exclusive shows, WWE NXT and “WWE Superstars.” He continued, “Everything is on the internet. People watch TV on their computer or on their phones or iPads. There should be an Internet Championship in WWE. They should be bribing me to defend my title on the internet, on television, wherever.” (INTERNET TITLE PHOTOS)

Despite Long Island Iced-Z’s somewhat spurious reign, the oft tweeting Superstar may have stumbled onto something genius in an Internet Championship – the perfect icon of present-day relevance and the potential beginning of a cutting edge tradition. Some strongly believe that such a prize should be sanctioned by WWE and defended regularly, much like the Television Titles once slung over the shoulders of legendary titans in NWA, WCW and ECW. 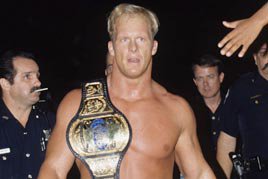 To name a few, “Stone Cold” Steve Austin, Dusty Rhodes, Booker T, Eddie Guerrero and even one of Ryder’s earliest mentors, Mikey Whipwreck, all clung to these championships in World Championship Wrestling and the original Land of the Extreme. The TV Title was an arguable kick-start for these competitors to earn a fair share of credibility en route to the highest level of accolades inside the ring.

“They were some great TV Champions and guys that went on to become World Champions,” Ryder said of individuals like Austin and his original trainer, Whipwreck. “It’s the same idea. The Internet Championship is a way to show people what I’m all about. I’ve created the Ryder Revolution.”

It’s not easy reaching the top in WWE. Woo-woo-woo! – Ryder knows it. While amassing a loyal horde of social media savvy WWE Universe members on the web, Long Island Iced-Z needed something big to lure the attention of WWE fans to his position on the periphery of sports-entertainment, away from epic ring attractions like the Cena-Rock rivalry. It wouldn’t be the remarkable precision of his spray tan or the peak of his gel-reinforced hair spikes. 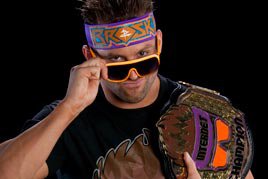 For Ryder, a former WWE Tag Team Champion, it was a lustrous accoutrement created in his own image, complete with purple and orange trim.

According to the Long Island lothario, the broski-faced Internet Title is rightfully his – recognized by WWE officials or not. And even if Ryder’s actions can inspire a change and yield a new golden prize for a digital era in WWE, he vows it’s not going anywhere.

“I’m never going to defend this title. I’ve earned this championship. I won it fair and square,” argued a ruffled Ryder. “My YouTube show has more than four million views, I dominate Twitter. I’m the first champion, I’m the last champion, I’m the only champion.”

Should there be a sanctioned Internet Title in WWE? And if so, is Long Island Iced-Z its rightful owner? There’s no more appropriate topic to discuss on Facebook and Twitter. Share your opinion with the rest of the WWE Universe.