At Vengeance, WWE Superstars got an exclusive sneak preview of THQ’s forthcoming video game, WWE '12. The next evolution of the SmackDown vs. Raw franchise, the video game sports a number of new features, a new gameplay engine and enhanced graphics. Superstars were able to experience their digital incarnations in the THQ Gaming Lounge at Vengeance (PHOTOS). It was particularly significant for SmackDown Money in the Bank winner Daniel Bryan, who is making his first video game appearance in WWE ’12.

WWE.com caught up with the master of the LeBell Lock to get his reactions for seeing his video game avatar for the first time inside THQ’s Gaming Lounge at WWE Vengeance.

WWE.com: Since becoming a WWE Superstar, not only have you won Money in the Bank, but you’ve also seen yourself immortalized in plastic form as a Mattel action figure. And you’ve now seen yourself for the first time as a video game character. What does it feel like to see yourself in that form?

DANIEL BRYAN: It’s actually kind of strange because it really is a video game version of me. You can see the little parts of yourself that are so accurate, like facial features … and my only reaction is, “Whoa! That’s crazy!”

WWE.com: As far as your in-game character’s move-set and abilities, do you think it was accurate?

BRYAN: The THQ guys were explaining everything to me as they were playing the game, showing me all the moves. When I saw the way my character moves; I thought it was a very accurate depiction. 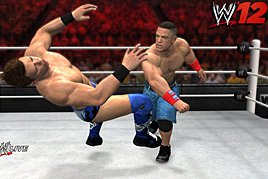 WWE.com: For a lot of Superstars, finally getting into the game series is a moment that means you have truly “made it.” Do you agree that this is a big deal to be part of the game series?

WWE.com: Your WWE '12 character features some solid facial hair, but not quite what you have right now. What do you think? Would you like to see some downloadable content that gives players your full beard?

BRYAN: That’d be wild to have an option to download a fuller beard. But the THQ guys were explaining the Create-a-Wrestler feature and all the things gamers can do, so players definitely have the ability create or adjust the beard themselves.

WWE.com:  Ever since your early days as a Rookie on WWE NXT, Michael Cole has been your biggest critic. He has constantly jabbed at you on commentary, and that is also replicated in the game. Were you offended hearing the digital Michael Cole make fun of you?

BRYAN: No, I thought it was fascinating that it’s an accurate representation of how Michael Cole commentates specifically on my matches. I remember from the video games of the original Nintendo and it definitely wasn’t like that. It was like, “Oh, what a maneuver!” but now the commentary is specifically tailored toward me, which is cool.

WWE.com: Do you anticipate your fans going and playing the game, winning the Money in the Bank briefcase, and then not cashing it in until WrestleMania?