John Cena is no stranger to titles, but he is not the type to tally his own accolades. When the West Newbury, Mass. native defeated Alberto Del Rio at Night of Champions, he became a 12-time World Champion and reached a milestone that may never be equaled: winning his 10th WWE Championship. 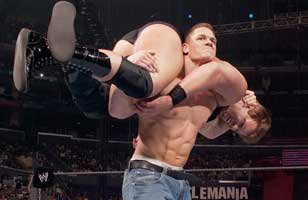 As WrestleMania 21 went Hollywood at the STAPLES Center, Cena won his first WWE Championship from the double-tough Longhorn Loudmouth, JBL with an Attitude Adjustment.

2. JANUARY 29, 2006
At the 2006 Royal Rumble in Miami's American Airlines Arena, Cena regained the WWE Championship he lost to Edge just three weeks earlier. The Rated-R Superstar had cashed in the first-ever Money In The Bank contract at New Year's Revolution, moments after an exhausted Cena had just retained the title within the Elimination Chamber.

3. SEPTEMBER 17, 2006
A Toronto crowd was evenly split in their allegiance as the hometown favorite, Edge, lost the WWE Championship at Unforgiven in a match he pioneered; Tables, Ladders and Chairs. In handing the Rated-R Superstar his first-ever TLC Match loss, Cena used an Attitude Adjustment from atop a ladder to send Edge crashing through stacked tables. 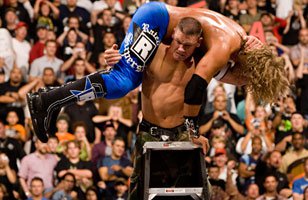 Cena would hold this particular WWE Title for more than a year before ultimately having to relinquish it due to injury.

4. SEPTEMBER 13, 2009
After chasing Randy Orton for months, Cena finally captured his sixth World Title in Montreal's Bell Centre, trapping The Viper in the STF at Breaking Point and making him scream “I Quit!”

5. OCTOBER 25, 2009
Beaten but not broken after losing the title to Orton inside Hell in a Cell, Cena received his WWE Championship rematch in a grueling One-Hour, Anything Goes WWE Iron Man Match at Bragging Rights. Forget Iron Man - it seemed all of The Avengers combined couldn’t stop Cena once he entered Pittsburgh's Mellon Arena! 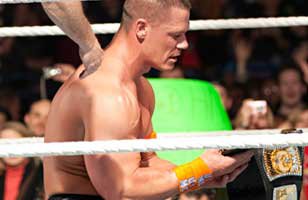 The victory in St. Louis' Scottrade Center represented the shortest title reign in Cena's history, as Batista has been granted an impromptu match moments later and took the championship from Cena's prone, unconscious body.

7. MARCH 28, 2010
With the brightest spotlight in of all entertainment upon him at WrestleMania XXVI, John Cena bested “The Animal” Batista at the University of Phoenix Stadium, winning his seventh WWE Championship in a match the WWE Universe is still buzzing about.

8. MAY 1, 2011
At Extreme Rules in Tampa's St. Pete Times Forum, John Cena defeated both titleholder The Miz and the gravity-defying John Morrison in a Triple Threat Steel Cage Match. The Superstar who was once known as the "Dr. of Thuganomics" was now becoming recognized as WWE’s man of steel.

9. JULY 25, 2011
Upon winning the WWE Championship declared vacant after CM Punk’s WWE contract expired while The Second City Saint was still the titleholder, Rey Mysterio defended his first WWE Championship the same night he won it: on Raw, in Green Bay, and against John Cena. Despite almost pulling off the upset, defeating both The Miz and Cena on the same night proved too much for Mysterio, and Cena’s WWE Championship reign count had climbed to nine. 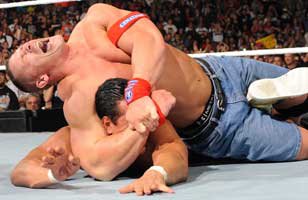 Cena lost the Undisputed WWE Championship Match to CM Punk at SummerSlam as a result of referee Triple H’s bad call. He then witnessed Kevin Nash’s shocking return to WWE as the 7-footer powerbombed Punk after his monumental victory. To make matter worse, Cena could could only watch in disbelief as Alberto Del Rio finally fulfilled his self-professed destiny by cashing in his Money in the Bank contract and defeating a barely conscious CM Punk. However, at Night of Champions, there would be no controversy in Buffalo, N.Y.'s First Niagara Center - Cena decisively defeated The Mexican Aristocrat, and cemented his place in history as the first and only 10-time WWE Champion.