WWE bring it back! The face-painted Superstar

WWE.com calls for the return of mystery, intimidation and sheer chaos on a mass scale. WWE, bring back the face-painted Superstar! (CLASSIC PHOTO GALLERY)

Right off the bat, one might ask, "How can WWE bring back face-painting, when it's already in use by Superstars like Goldust and Yoshi Tatsu?" With all due respect to these notable exceptions, the full potential of what face-panting was to the squared circle - and absolutely should be again - is barely scratching the surface.

Looking back, this awe-inspiring device was about far more than just making things colorful. It was about fear – a fear of the unknown that wielded overwhelming intimidation in its wake.

The Ultimate Warrior's face paint acted as an extension of himself, a cornerstone of the very intensity that was as valuable to him as his explosive flying shoulder block, press slam or wide-eyed look as he exhalted "the Gods in the Heavens above!" His look radiated pure emotion, keeping both his opponents and the WWE Universe completely off-balance, as neither knew what truly laid beneath. 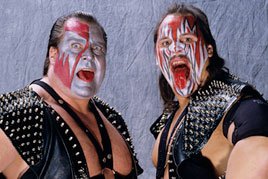 "Here comes the Ax/Here comes the Smasher/The Demolition/walking disaster!" Demolition, and other legendary painted WWE tag teams that included The Legion of Doom and The Powers of Pain, brought this technique to new and frightening heights, driving terror into the hearts of their adversaries before the first blow was even struck. "What a rush!"

Yet, neither the longest-reigning World Tag Team Champions in WWE history, nor their thunderous painted contemporaries would have been nearly as intimidating without their faces of fear.

Moreover, painting for battle wasn't just about stirring up dread. Superstars like Papa Shango, Boogeyman, Kamala and Doink the Clown used the art form to complement their unique brand of mystical, outrageous and sometimes just weird, in-ring shenanigans – finding success on an absolutely bizarre scale. (And perhaps forcing members of the WWE Universe to ask the question "Why so serious!")

It's once again time to put a face to to the spirit of WWE competition.