Special guest referees: Not so black and white

Eyebrows across the WWE Universe were raised when Executive Vice President of Talent Relations and Interim Raw General Manager John Laurinaitis named himself special guest referee in the WWE Championship Match between CM Punk and Dolph Ziggler at the 25th anniversary of the Royal Rumble on Jan. 29.

Because of the Interim GM’s rocky relationship with CM Punk, the WWE Universe is left to wonder what role Laurinaitis might play in determining the WWE Championship. Despite being true to his word and banning Jack Swagger and Vickie Guerrero from ringside at the Rumble, the WWE Universe is left unconvinced of Mr. Laurinaitis's ability to remain impartial – at least according to numerous posts on Facebook and Twitter. If he does work his way into deciding the outcome of the match, just how stacked will the deck be against The Second City Savior with the title on the line? For that matter, should Dolph Ziggler feel all that comfortable with the new guest referee? After all, Laurinaitis lived up to his word on the Jan. 9 Raw SuperShow, and banned both Jack Swagger and Vickie Guerrero from ringside. (MATCH PREVIEW)

As history has shown, when a WWE authority figure works him or herself into a guest officiating role during an important match, there's just no telling what might happen. Though it’s a pretty safe bet that in their WWE Championship Match at the Royal Rumble, either the champion or challenger will not be happy with the guest official’s final decision. WWE.com looks back on some of the more memorable instances of an authority figure-turned-referee costing a Superstar big time. 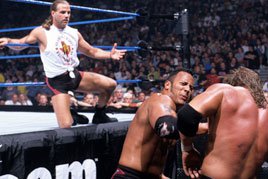 HBK turns the tables on The Rock: With the WWE Championship on the line, The Rock and Triple H did battle on the premiere episode of SmackDown on Aug.  26, 1999. Shawn Michaels — who was acting WWE Commissioner at the time — served as special guest referee and entered the arena to a huge ovation from the capacity crowd in Kansas City. But as the match played out, it would become clear that The Heartbreak Kid had intentions of living up to his moniker that night.

After a brutal struggle, The Great One took control of the match, hitting Triple H with the Rock Bottom and preparing for The People’s Elbow. The crowd grew raucous as The People's Champion hit the first rope and jumped over the prone Triple H. But the sickening sound of Sweet Chin Music suddenly stopped The Rock in his tracks, and shocked the WWE Universe. The Game then staggered over to Rock, hooked his arms, and connected with a Pedigree that sealed the match — and the title — for The Cerebral Assassin. (WATCH)

Vickie Guerrero, a not-so-impartial observer: In a match to determine the WWE Women’s Championship on Feb. 26, 2010, Mickie James faced an uphill battle against not only the nearly 6-foot-tall Michelle McCool, but the special guest referee — none other than SmackDown General Manager Vickie Guerrero. 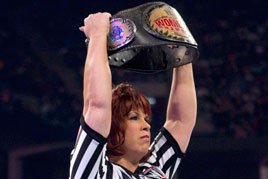 With the GM planted squarely in her corner, a confident McCool stalked Mickie James. Mickie found an advantage, though, and rolled McCool up for a cover. SmackDown’s GM was in no hurry to count to three, however, and instead unleashed on Mickie a vicious slap to the face that echoed throughout the arena. The GM-turned-referee broke the count and knocked James for a loop. As Mickie got up in Guerrero’s grill, McCool went on the offensive, rolled up her opponent, and was declared the new Champion. Vickie’s interference cost Mickie James the match — and the Women’s Title. (WATCH)

No Way Out for Triple H: At No Way Out in 2002, Triple H and Kurt Angle met in a memorable contest with The Game’s title opportunity at WrestleMania on the line. Stephanie McMahon had declared herself special guest referee, and from the moment Angle stepped in the ring, it was obvious who she was rooting for. 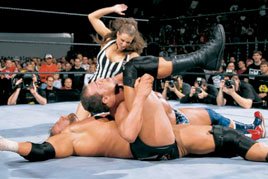 After a series of quick counts, it was clear The Game would have his work cut out for him if he wanted to retain his title opportunity. Things started to look up for Triple H, however, when Angle ran at him with a monster clothesline near the ropes. The Cerebral Assassin ducked the blow, sending Angle straight into Stephanie and knocking her over the ropes — and seemingly out of the match.

A more traditional officiator took Stephanie’s place, but Triple H wasn’t out of the woods yet — not by a long shot. After Angle disposed of the new ref, Stephanie found her way back to the ring, only to be knocked out again. She eventually came to — and just in time to ignore two illegal chair blasts by Angle, costing Triple H his chance at the title. (PHOTOS)