On the WWE’s recent tour of Japan, several Superstars took part in a very special sports-entertainment tradition. They have the jacket and full stomachs to prove it.

The Ribera Steakhouse is a landmark in the Land of the Rising Sun. For years, Superstars have made pilgrimages to this small steakhouse in Tokyo, where their predecessors have wined and dined.

Photographs of those who have passed through for a meal line the tiny restaurant from floor to ceiling. Superstars sit down for a king-sized helping of steak, rice and corn. When they’re finished, they become members of an exclusive group when the restaurant’s proprietors present them with a satin coat emblazoned with its bull’s head logo.

For some, like WWE Champion CM Punk, it’s a chance to follow in the footsteps of their heroes. “I always remember looking at early wrestling magazines when I was a wee little Punker and seeing guys in these Ribera Steakhouse jackets and it became this elite group,” he told WWE.com.

“If you knew a guy that had a Ribera coat, that meant he did a tour of Japan. It’s a coveted thing.”

While satin jackets are no longer trendy or part of mainstream fashion, having been relegated to the retro lines of athletic clothing companies, Ribera’s garments are a badge of honor in the world of sports-entertainment.

“It’s a milestone,” said Divas Champion Beth Phoenix, who received hers during her first trip to Japan in 2009. “I’ve worn it several times. It’s not the most Diva-esque of jackets, but it is something you wear with pride. If you are in this business, you know exactly what that means.”

The Glamazon’s photo also got unique placement at the establishment. “I [was] smiling like a cheeseball and they placed my picture [on the awning outside the restaurant]. So, when you drive up, there’s Goldberg and Beth Phoenix side-by-side.”

Getting a Ribera Steakhouse coat may have also driven a wedge between Zack Ryder and Curt Hawkins. Long Island Iced-Z tweeted a picture of his new black and hot pink jacket, setting The Party Starter off.

“I just find it silly that he’s bragging about it when he doesn’t even know what it is or the significance of it,” Hawkins said. “I’ve known Zack longer than anyone in this company and he’s not a fan of Japanese wrestling. He never watched it before in his life, so I find that tweet he put out with [the jacket] very ironic.” 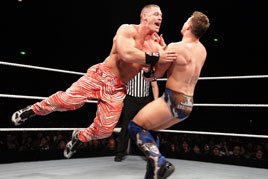 Even more upsetting to Hawkins was another fashion staple of sports-entertainment’s past that was presented to several Superstars in addition to the jackets: Zubaz pants.

The brightly colored, baggy zebra print pants were made famous, in part, by WWE Hall of Famers The Road Warriors in the early 1990s and became an essential part of a Superstar’s wardrobe, along with, yes, fanny packs.

Today’s Superstars mostly joked about the loud pants, thinking they would remain a relic of the past. Then, they put them on.

Hawkins agrees. Though he didn’t get them from Ribera, The Party Starter bought a pair of Zubaz and wore a fanny pack as part of his Halloween costume. “Zubaz pants are so comfortable, the fanny pack is so convenient, all your stuff is right there,” he explained. “I get what [former Superstars] were thinking at the time. Convenience and comfort.”

During the last show of the tour, John Cena may have officially signaled the return of Zubaz to sports-entertainment. Wearing his Ribera Steakhouse jacket to the ring, the leader of the Cenation did battle in a pair of red and white Zubaz.

“The tour was exhausting, I wanted to do it to pick up morale and give everyone something to talk about,” Cena said.

For Punk, it may become a part of his regular attire. “Zubaz, fanny packs, Ribera jacket, maybe sunglasses indoors, high tops untied. It’s an homage to my elders,” added the WWE Champion.